News that the Colts are sitting their starters shifted this line in the Lions' favor — perhaps too much so. Our NFL betting picks think there's value in the points with Nick Foles at the helm, find out more for this preseason matchup!

The Detroit Lions and Indianapolis Colts face off on Saturday in the second week of NFL preseason action. These teams have been holding joint practices with each other this week, which gives us plenty of matchups to look forward to with players fighting for roster spots.

Here are our best free NFL picks and predictions for Lions vs. Colts in Week 2 of the preseason.

This line hit the board on Monday with the Lions installed as 1.5-point road favorites with the Over/Under at 40.5. With the news that the Colts would be sitting the majority of their starters, the line grew to Detroit -3.

The total has seen interesting movement, initially bumping up to 42.5 before ticking down several points. As of Friday morning, the O/U is sitting between 38.5 and 39.5 depending on the book.

The Lions are 1-11 in the preseason since 2018. Find more NFL betting trends for Lions vs. Colts.

Lions vs Colts picks and predictions

To nobody's surprise, Colts head coach Frank Reich has already said that the majority of his starters (including quarterback Matt Ryan) will not play on Saturday. But they might not need them.

Nick Foles is one of the best backups in the game and is very familiar with Reich's system while Sam Ehlinger looked terrific last week. The former Texas Longhorn star completed 10 of 11 passes for 88 yards and two touchdowns while adding 24 yards on the ground.

The Colts also have some talented backs behind All-Pro starter Jonathan Taylor, and even if Nyheim Hynes, Phillip Lindsay, and Ty'Son Williams get limited touches they'll be able to shred Detroit's run defense.

The Lions gave up 168 yards on the ground to Atlanta last week and they desperately need someone to step up in their defensive tackle rotation, especially with sophomore Levi Onwuzurike sidelined.

The secondary is another area of concern for the Lions who should have developed plenty of depth after the injury bug hit last year, but increased reps apparently mean little to a group of defensive backs that routinely got burned in practice.

Betting on the preseason is always tricky but it's pretty obvious that some coaches and teams care more about winning than others (see the Ravens and their 21-game exhibition winning streak).

The Lions haven't won a preseason game since 2018 when they went 1-3. Although they were extremely competitive against Atlanta last week, the Falcons are another team that always loses in the preseason, so that doesn't say much.

On the other hand, The Colts went 3-0 in the preseason under Reich in 2021 and they had a lead against the Bills (who have won nine preseason games in a row) last week before their fourth-stringers blew it in the final quarter. Give me Foles and the Colts catching three points at home.

Both of these teams scored more than 20 points last week and cashed the Over. Although Ryan won't play for Atlanta and starting QB Jared Goff won't suit up for Detroit, we still like these sides to go Over the total on Saturday.

We already mentioned why we think the Colts will be able to move the ball on Detroit, but the Lions shouldn't be a complete pushover on offense either. Indy did surrender 310 passing yards to Matt Barkley and Case Keenum last week, and Detroit's reserve passers are actually fairly experienced.

Both David Blough and Tim Boyle have thrown plenty of passes at the pro level, and while they're not world-beaters, they can move the ball against second and third-stringers.

The Lions also have plenty of depth at wide receiver, with guys like Tom Kennedy (eight catches for 104 yards last week) eager to fight for playing time.

Another factor that should result in offensive success for Detroit is its road-grading offensive line which has predictably been one of the team's bright spots during camp.

Truth is that you can never really go wrong with betting on underdogs in the preseason, since there are so many unknowns that taking the points makes the most sense.

The line might have moved a tad too much with the news that most Colts starters wouldn't be playing and I don't expect many entrenched Lions starters to be in there long either. With the proven Foles at the helm for the first quarter and Ehlinger able to make plays with his arm and feet after that, Indy has value on the moneyline. 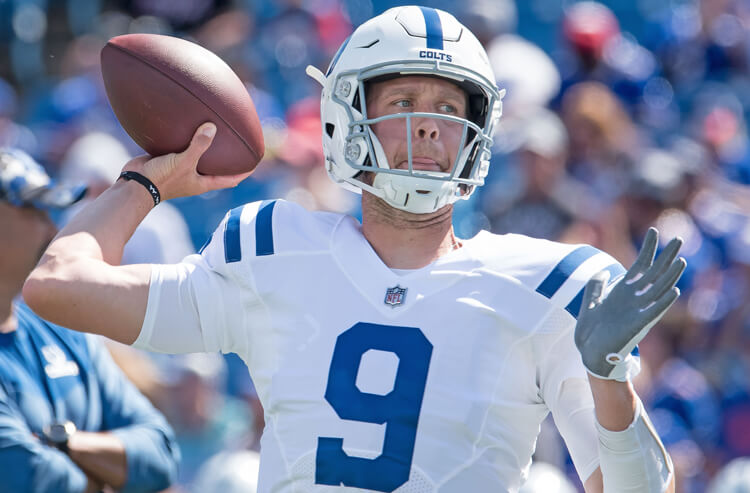