The NFL preseason schedule continues this weekend, including in Minnesota, where the Vikes and Niners square off after joint practices. Our NFL betting picks for 49ers vs. Vikings highlight why the ground games should rule the day.

After engaging in joint practices this week at Vikes camp, the NFL preseason schedule will continue Saturday with the San Francisco 49ers visiting the Minnesota Vikings.

San Francisco's preseason schedule got off to a win last week in the Bay, with a brief Trey Lance appearance doing enough to leave 49ers fans craving more. Minnesota, meanwhile, dropped its August opener in a flat showing against Vegas.

Here are our free NFL picks and predictions for the 49ers vs. Vikings, with kickoff set for August 20.

The Under is 7-1 in San Francisco's last eight games. Find more NFL betting trends for 49ers vs. Vikings.

49ers vs Vikings picks and predictions

The 49ers will sink or swim with Trey Lance's year-two development. That reality is why San Francisco's preseason opener was so tantalizing, with Lance's absurd physical talent well apparent. Now, Niners fans will need to be patient, with Lance and the starters on ice this week.

Under center for San Francisco will be former Eagle Nate Sudfeld. Prior to joining the 49ers this offseason, Sudfeld's most noteworthy NFL moment came in Doug Pederson's final act in Philadelphia — blatantly tanking in Week 17 by inserting Sudfeld into the game.

However, in the QB-friendly confines of Philly, with a talented coaching staff, Sudfeld also developed a reputation as a high-upside backup. San Fran echoed that notion this offseason, handing out a fully guaranteed $2 million deal. Sudfeld looked like a safe pair of hands last week, throwing for 103 yards and a score on 8-of-11 passing.

Few systems in the NFL can manufacture offense like Kyle Shanahan's, but Sudfeld won't be short on help on the field, either. Rookie third-round pick Danny Gray has been making waves since the spring, and his elite speed popped last week with a 76-yard touchdown. Similarly, Ray-Ray McCloud garnered a team-high four targets and four catches, finding the end zone once as well.

While Sudfeld should provide the 49ers with a steady presence under center, Minnesota won't have a similar luxury. With Kirk Cousins out with COVID last week, it was backup Sean Mannion and sophomore Kellen Mond under center. Neither player's stat line was poor — Mond was 9 for 14, 119 yards, and two scores while Mannion was 8 for 12 for 79 yards — but that flatters the play.

Mond's inability to process on a play-to-play basis remained brutally apparent, with the second-year passer bordering on a disaster when forced to play within the confines of an offense. Mannion, meanwhile, is a low-skill career backup who doesn't possess the physical talent to punish even deep reserves on defense.

I have no confidence in Minnesota's quarterback situation here, even with Mond's physical talent mitigating some glaring shortcomings in his game in a preseason setting. I'm happily taking San Fran with the points.

Both due to scheme and talent, I expect both running games to thrive on Saturday.

Whether it's the wide-zone-heavy approach Kevin O'Connell will take or the ZBS of Shanahan, the running games will force youthful, inexperienced defensive linemen to flow laterally and stay disciplined.

Time and time again, gap discipline is non-existent in preseason football as teams go deep down their depth charts — those unmanned gaps against zone blocking schemes will lead to huge gains.

With no shortage of mouths in the backfield last week, Shanahan leaned on his rushing attack with 32 attempts compared to 25 dropbacks.

Tyrion Davis-Price and Jordan Mason are both pushing hard for early down roles in the regular season and ran well a week ago, combining for 66 yards on 16 carries. That rookie duo and incumbent Jamycal Hasty should receive the bulk of the touches on offense here as San Fran again leans on the ground game.

In Week 1, Minnesota had 28 dropbacks vs. 22 runs, but that run:pass ratio was skewed as the Vikings trailed wire-to-wire in Vegas. With the bulk of their skill position players in bubble wrap, a pair of tailbacks will be at the heart of their production.

Sophomore Kene Nwangwu, an electric athlete in space, showed as much last week with nine total touches for 59 yards. Mixing in with Nwangwu was rookie Ty Chandler, who ran for a team-high 50 yards. Both players can be devastating one-cut runners against lesser competition, and with the wide holes they'll get up front, expect flashy games from both.

After Overs went an uncharacteristic 14-3 last week, we've seen some unnecessarily high numbers on the board this week. That includes in Minnesota, where a 41 is still on the board at Caesars. With a dearth of talent at QB but big games on the ground there for the taking, side with the Under.

Ultimately, there's only one team I trust here to manufacture offense in what has the potential to be a pretty scrappy affair. That team is getting 4.5 points — after days of practicing in Minnesota — and is steeped in the foundations of its offense, while the Vikings are very early days under their new regime.

Even with the vast majority of starters sitting out here, I give the 49ers the edge in coaching, depth, explosive play potential, and most importantly, quarterback play.

With the line climbing well above a field goal, your best bet is sticking with San Fran and taking the points. 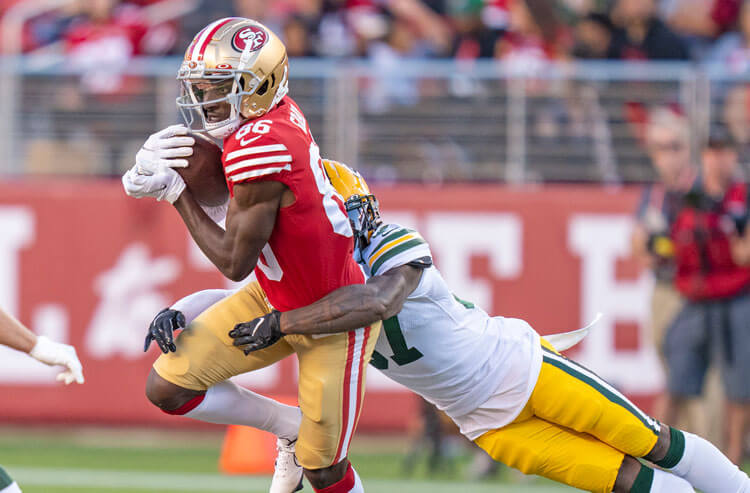 49ers vs Vikings Preseason Picks and Predictions: Running Rampant in Minnesota
Provided by