As Kyle Trask continues to moonlight for Tom Brady, our NFL betting picks predict better outcomes for the Buccaneers this week against the Titans and an offense that just isn't clicking with its backups in right now.

Week 2 of the NFL preseason features an NFC-AFC matchup between the Tampa Bay Buccaneers and Tennessee Titans at Nissan Stadium on Saturday night.

These teams will meet with both coming off losses. Last week, Tampa Bay dropped a close game to Miami, while Tennessee was the latest to fall to Baltimore on its 21-game preseason winning streak.

Despite issues getting the offense going against the Ravens, the Titans opened as 2.5-point home favorites in Week 2. Below are our best free NFL picks and predictions for Buccaneers vs. Titans on Saturday, August 20.

Tampa Bay opened as a 2.5-point underdog at most sportsbooks, with the line moving as much as a full point in Tennessee’s favor at Unibet and Bet Rivers by midweek. The total opened at 41.5 at the majority of major sportsbooks and has dipped between 38 and 38.5.

Head coach Mike Vrabel is 4-6-1 ATS in the NFL preseason and 1-2 ATS in its second week. Find more NFL betting trends for Buccaneers vs. Titans.

Buccaneers vs Titans picks and predictions

With Tom Brady on an indefinite break for “personal reasons,” the Bucs will once again lean on second-year quarterback Kyle Trask and veteran Blaine Gabbert in the offense.

Gabbert, listed as the No. 2 QB on the depth chart, got the start last week and played two series in a 26-24 loss to Miami, in which he completed all five of his passes for 56 yards and threw a 23-yard touchdown.

Following Gabbert’s quick score, Trask jumped in on the next series and completed five of six passes for 67 yards, leading the team down the field for another scoring drive punctuated by a one-yard run by Ke’Shawn Vaughn.

Trask’s next two series were ugly, with the former Florida signal caller throwing an ill-advised pass that was intercepted at the Tampa Bay 22 and turned into a touchdown by Miami’s offense. He followed that up with a fumble returned for a touchdown by Miami linebacker Sam Eguavoen that put the Dolphins up 20-14 with nearly a minute to play in the first half.Trask finished out the game and went 25-of-33 passing for 258 yards.

Offensive lineman Aaron Stinnie, who played for Tennessee from 2018 until November 2019, was the only Tampa Bay player listed as a starter who took the field. Offseason acquisition Julio Jones, who was released from the Titans in March, also sat out the Miami matchup.

Despite an absence of first-stringers, which will likely be the case again in preseason Week 2, the Bucs totaled 389 yards of offense compared to 242 by the Dolphins, went 2-of-2 in the red zone, and recorded 22 first downs to Miami’s 12.

Tennessee was outgained 389 to 299 by Baltimore and committed three turnovers, including a pair of interceptions by Logan Woodside.

The third-year backup quarterback came in early for rookie Malik Willis, who went 6-of-11 for 107 yards and ran for 38 yards and a score, but was pulled by Coach Vrabel for not passing the ball enough.

Willis will be called upon to test his arm in Week 2, especially against a Bucs secondary that ranked in the bottom half of the NFL last season.

Trask will also look to rebound from some poor mistakes while facing a Tennessee stop unit that let Baltimore backups Tyler Huntley, Brett Hundley, and Anthony Brown combine to complete all but seven of their 35 passes for 259 yards and a 6.8 yards-per-pass average.

Considering how much difficulty Tennessee had running its offense last week, and Willis being asked to do more in a passing game he’s still learning, the advantage is with the Bucs, who were a missed field goal away from winning over Miami as time expired.

In 2021, both of these defenses ranked in the Top 3 against the run but struggled against the pass.

On offense, these teams were polar opposites, with the Bucs boasting the No. 1 pass attack in the league (307.6 yards per game), while the Titans ranked in the Bottom 10 in passing yards (201.1). Tennessee, on the other hand, owned one of the best rushing attacks, even with running back Derrick Henry out for half the season, but the Bucs averaged just 98.4 rushing yards per contest.

We already know Henry is scheduled to sit all three preseason games, and Vrabel is looking for more in the passing game from his rookie QB. Bucs head coach Todd Bowles also indicated we’d see a lot more from Trask in this matchup, so expect a focus on the air attack from the Bucs.

We’re likely in for a few turnovers as both of these young quarterbacks get work in their respective offenses, but Tennessee should have a better day than it did against an ultra-competitive preseason team in Baltimore.

Look for a lot more points on the Titans’ end and the Over to hit in Week 2.

The offense has quite a bit to figure out, and we may see even more ups and downs with Willis, a dual-threat, forced to do more with his arm.

Gabbert proved a solid backup option in his limited action in Week 1, and Trask should improve against a weaker Tennessee secondary.

The Bucs were so close to a win in Week 1 and can get the job done on the road, while Tennessee continues to evaluate new personnel at receiver and the offensive line. 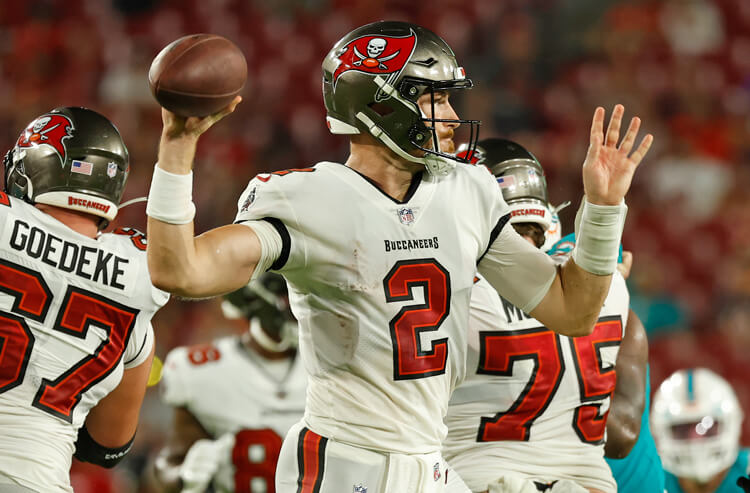