After tensions boiled over in a joint practice this week, the Patriots should have an extra impetus to stick it to the inferior Panthers. See why the Pats' capable backups can keep the pressure on Matt Rhule in this now-heated preseason tilt.

The Carolina Panthers are on the road this Friday to take on the New England Patriots in NFL preseason action.

The two teams held joint practices this week and several skirmishes broke out as three players were kicked off the field on Tuesday. They fought again on Wednesday and two more players were ejected. Expect the physical play to continue on Friday.

The Panthers won their Week 1 game, holding on to defeat the Washington Commanders 23-21. On the flip side, the Patriots dropped their first preseason game to the New York Giants.

Can Carolina go 2-0 in the preseason or will New England pick up its first victory? Continue reading our free NFL betting picks for Panthers vs Patriots on August 19.

The Panthers are 0-4 against the spread in their last four road games. Find more NFL betting trends for Panthers vs. Patriots.

Panthers vs Patriots picks and predictions

With what went on in the two joint practices the teams had Tuesday and Wednesday, this game might be a lot more physical than a typical preseason contest.

Several players were kicked off the field because of the fights on Tuesday and Wednesday, and it might have cost one his job.

It also may give the Patriots more motivation than they already had. Losing to the New York Giants last week was a bit of an embarrassment. I expect New England to come out far more inspired.

Patriots Head Coach Bill Belichick rested starter Mac Jones against the Giants, and the sophomore told reporters he’s eager to play, especially against a defense that gave up the second-fewest yards last season.

Jones completed 67.6% of his passes last season, throwing for 3,801 yards, including 22 touchdowns and 13 interceptions. He was 13th in yards, 15th in quarterback rating, and 14th in touchdowns.

Whatever action Jones sees will be minimal, and the bulk of the work at quarterback will fall to backups Brian Hoyer and Bailey Zappe. In the game against the Giants, Hoyer went 5-for-8 for 59 yards and a touchdown, while Zappe threw for 19-for-32 for 205 yards and a touchdown.

The two quarterbacks competing for the Carolina starting job — Baker Mayfield and Sam Darnold — will probably see more action on Friday. Mayfield was four of seven for 45 yards and Darnold was two of three for 16 yards and the lone passing touchdown in Week 1.

Carolina jumped out to a 20-6 lead against the Washington Commanders and then almost choked the game away, getting outscored 15-3 in the fourth quarter. They won’t be so fortunate if they find themselves in the same situation with New England.

Both teams scored 20 or more points in their respective Week 1 games and both easily hit the Over. The Panthers went past the total of 36 by eight points while the Patriots cleared the 34.5-point total by 9.5. It was part of a trend for the Overs, which went 14-3 in Week 1.

Though Jones, Mayfield, and Darnold will see more playing time, the backups and third-stringers will still see the bulk of the action.

The competition for the third quarterback is between Matt Corral and Phillip Walker. Walker seemed to win the first round, going 10 of 19 for 136 yards. Corral was an ugly 1-for-9 for 11 yards.

Neither threw a touchdown. Running back Spencer Brown scored and cornerback Duke Dawson improved his standing with a pick-six.

The Patriots are 4-0 on the Over in their last four games overall and 6-0 in their last six at home. I like the Over to keep cashing on Friday night.

Before the Giants loss, Belichick was 9-1 straight up in the preseason since 2018.

Even though the games don’t matter, Belichick treats them like the regular season. He was not happy with his team’s performance against New York in Week 1 and that was more than likely the theme for this week’s preparation for Carolina.

Belichick is a master motivator and the fights in practice only added to the rising tensions. Panthers coach Matt Rhule, who might be coaching for his job, should be thoroughly outcoached on Friday.

Jones will see his first action this preseason and should have a decent showing in the one or two series he plays. The backups have already demonstrated they are more than capable of moving the ball down the field.

Expect a bounce-back game from the Patriots and an outright win. 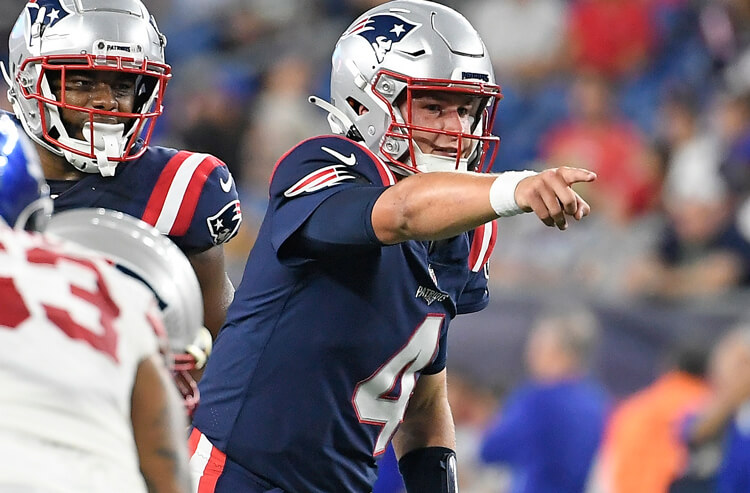