No one stat can predict the outcomes of football games. Sharpen your NFL handicapping by using these advanced metrics together.

With the boom of analytics in the NFL, there is seemingly a new metric every week that swears to redefine how we interpret and value team and positional performance.

With the continued swarm of these metrics, it can be hard to discern which help handicap a game.

No singular metric is perfect and all-encompassing, so it is vital to use and reference several in your process. Outlined below are some that we’d recommend adding to your arsenal.

DVOA by Football Outsiders analyzes the “success” of each play while contextualizing the situation (down and distance, field location, score, quarter, time, and opponent quality). DVOA measures the value of a team, unit, or player compared to the league average, appearing as a positive or negative percent (for example, -15 percent DVOA means 15 percent worse than league average).

Why should bettors use DVOA?

Because every team plays a unique schedule varying vastly in difficulty, DVOA is arguably the best at-a-glance way to see how good teams genuinely are. DVOA is demonstrably more accurate at explaining past performance and predicting future success.

Bettors can use DVOA to see how a game might play out and whether teams will extend or lose a lead if they have one. DVOA can also be used as an in-play “glossary” to help you determine if a live wager has merit.

DVOA indicators of a team being able to sustain or extend a lead:

Here, the more, the better  — so the more indicators that a team has, the better chance it will be able to extend the lead. The good/poor of each would invert for teams likely to surrender a lead.

DVOA indicators that a team can close a deficit:

Again, the more, the better and the good/poor of each would invert for teams likely not to be able to close a deficit.

Since DVOA relies on contextualizing for opponents, high variance results in games can throw off DVOA early in the season when the sample size is small. Football Outsiders attempts to account for this variance with their DAVE metric (DVOA adjusted for variation early), which mixes early-season performance with preseason projections. Still, it heavily relies on their preseason projections being correct.

DVOA’s reliability is also higher the larger the evaluated unit is. Generally, DVOA is comfortably reliable down to the level of passing/rushing offensive, and defensive unit splits and no further down (positional groups and individual players).

What are PFF player grades?

PFF player grades from Pro Football Focus attempt to quantify a player’s contribution to production. For each play, a player is graded on a scale of -2 to +2 in 0.5 increments for their contribution. These grades are then placed on a 0-100 scale and are provided on a per-game and seasonal basis.

Why should bettors use PFF player grades?

PFF player grades are an excellent tool for identifying skill gaps in NFL matchups, whether in the trenches, in coverage, or elsewhere. It is also helpful to determine how a team might fare given injuries to their starters or their meaningful depth players, as overall player grades are broken down further by their usage and how they fare in specific game elements concerning their position.

What are the shortcomings of PFF Player Grades?

PFF player grades are entirely manually generated by their analyst staff. Although PFF ensures that only the top-end of their staff of 600 analysts handles and reviews the process, the fact remains that it is still an arbitrary process prone to human bias and error. PFF also acknowledges that it cannot know the play call and responsibilities of all players on every play and will default to a zero grade for players on such plays. This means skillful players may be losing out on favorable grades if their role is generally muted or undeterminable.

EPA is a metric that quantifies the number of expected points that a play adds (or loses). EPA uses historical data based on the down, distance, and field position to determine the points scored on average from that exact situation.

Why should bettors use EPA?

EPA is particularly popular as a metric to evaluate quarterbacks, usually in EPA per dropback. It is also beneficial as a matchup tool. You can compare a team’s proficiency in using or defending certain play types to its opponent’s ability to defend or use it.

What are EPA’s shortcomings?

EPA is not opponent-adjusted and can be misleading if a team has faced an unbalanced schedule. Secondly, offenses have become more efficient over time and face the challenge of trading off sample size for more representative data. There are also concerns (like with many football statistics) over EPA’s ability to distinguish individual players’ contributions towards EPA and how predictive it is as a result.

CPOE  from Next Gen Stats aims to contextualize how good a quarterback’s completion percentage is while controlling for the difficulty of the throws they attempt. CPOE accounts for air distance, distance from the sideline, target separation from nearest defender, the quarterback’s distance from closest pass rusher, pass speed, and time to throw.

Why should bettors use CPOE?

CPOE relies on private player tracking data and a proprietary formula and is impossible to reconstruct. A version has been created using publicly available play-by-play data that merely uses depth of target and general direction (left, middle, and right). It correlates strongly to Next Gen Stats’ version (r^2 of 0.88) but is undoubtedly not a one-of-one translation.

Why should bettors use ANY/A?

ANY/A uses a straightforward formula that produces an easy-to-understand metric that correlates very strongly with scoring. Although ANY/A might not be sufficient on its own, it is undoubtedly a great metric to pair with other quarterback metrics.

ANY/A doesn't account for the situation, opponent, or the relative pass-catching or pass-blocking talent of a team. Therefore it is prone to discrepancies in opponent strength.

Additionally, ANY/A fails to capture any rushing production a quarterback produces and can undersell the proficiency of mobile quarterbacks. For example, ANY/A would suggest Matt Schaub (6.48) was much better than Michael Vick (5.46).

Route participation is the percentage of total pass plays during which a player ran a route. YPRR is a receiver’s total yards divided by the number of routes they’ve run.

Why should bettors use YPRR?

When betting on player props for receivers, it is crucial to identify who has the opportunity. Opportunities for receivers come in two primary forms: being on the field and being targeted while on the field. Route participation will tell you the former, whereas YPRR tells you the latter.

Although route participation and YPRR may be good at identifying the opportunity and potential production, it generally lacks nuance in identifying a receiver’s actual role. And although player prop markets are soft, the market has become relatively efficient for top-end players. Therefore, it is generally more profitable to target second-level and replacement-level talent.

What are air yards and aDOT?

Air yards are the number of yards the ball travels through the air on a given target. Whereas air yards would be a volume metric, aDOT takes air yards and turns them into a rate statistic by dividing them by targets.

Why should bettors use air yards and aDOT?

Because air yards are a volume metric, they are a good indicator of the total opportunity. More distinctly, if a player is converting an abnormally high or low amount of his air yards, he will likely regress (and likely to a career average level of proportionate production). This is particularly useful for player props and DFS.

aDOT, on the other hand, is a great way to identify a receiver’s role in the offense. A receiver with a higher aDOT is likely to be the field-stretching deep threat, whereas a lower aDOT is likely to be the possession or slot receiver. Identifying a player’s role helps capitalize on props for players who may be filling in due to injury or to identify a specific coverage mismatch.

What are the shortcomings of air yards and aDOT?

A receiver’s role can change season to season and even in the middle of one. For example, Robby Anderson was a renowned deep threat with the New York Jets (15.1 aDOT in 2019) before signing with Carolina in 2020. The prevailing assumption was that he would maintain that role with Carolina, but he surprisingly finished with a 9.8 aDOT and played a possession-heavy role. Then heading into the 2021 season, it was assumed he would keep his new possession role, but his role seems to have reverted (14.6 aDOT).

As North America’s most popular professional sport, there are a litany of resources that provide advanced stats and metrics on the NFL. Next Gen Stats, Football Outsiders, and Pro Football Focus are just a few examples.

DVOA means defense-adjusted value over average and was created by Football Outsiders. It analyses the success of football plays based on different situations.

EPA is expected points added by a play during an NFL game. 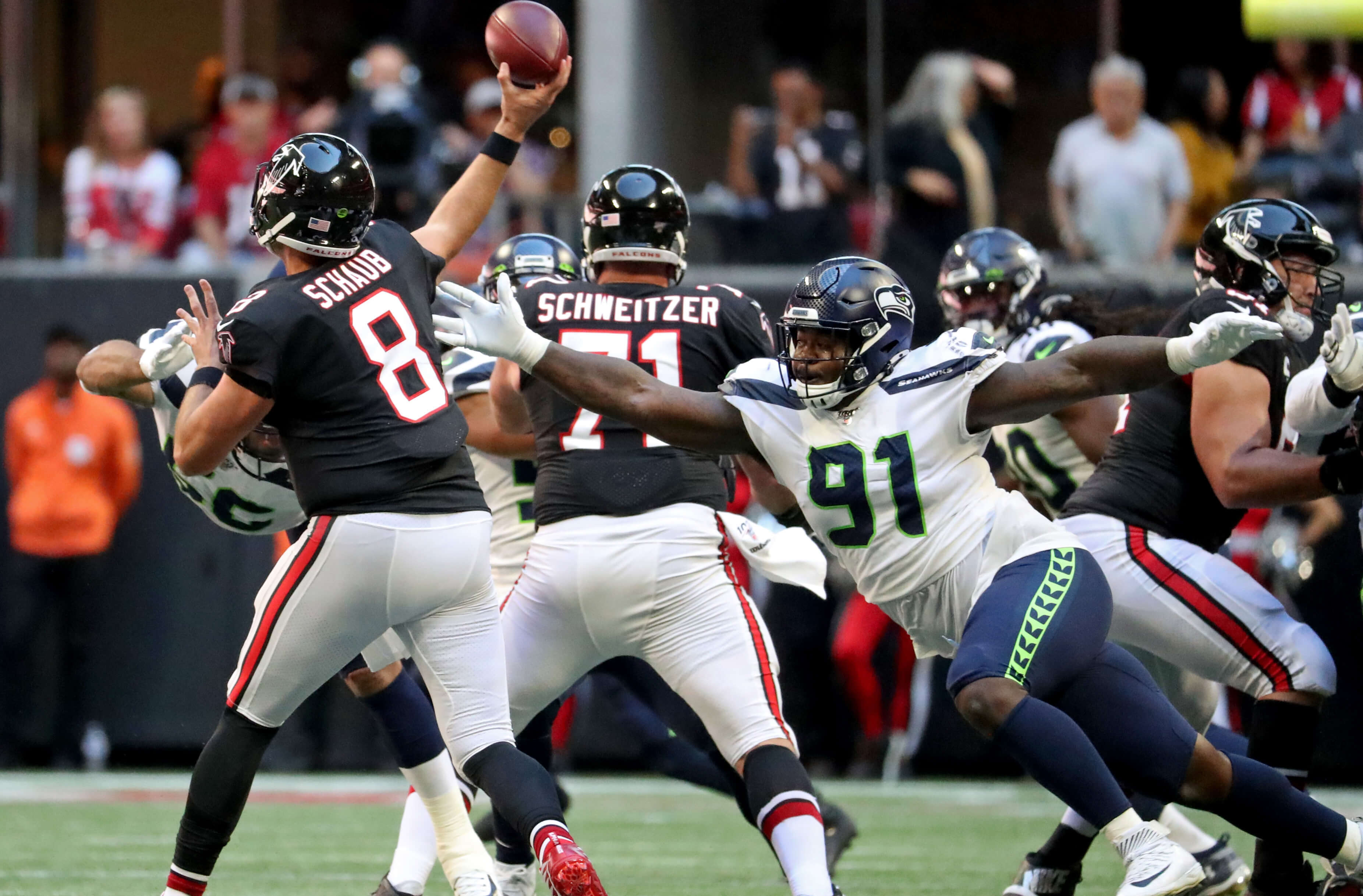