With Titans RB Derrick Henry back in the mix for the Divisional Round, and the Bengals suffering absences on the defensive line, we think Tennessee will trample all over visiting Cincinnati. Read on for our NFL betting picks. 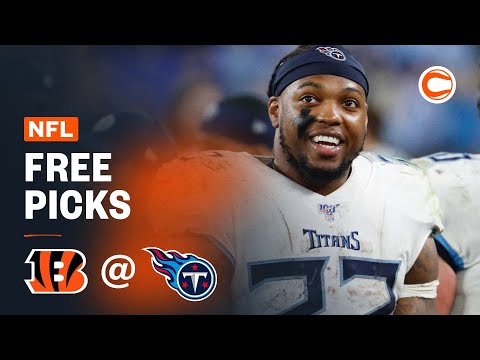 The Tennessee Titans not only begin their road to the Super Bowl in the AFC Divisional Round but are out to prove they’re a worthy No. 1 seed when they host the Cincinnati Bengals on Saturday.

The NFL betting odds have Tennessee as a 3.5-point favorite, with that spread bolstered by the expected return of Titans RB Derrick Henry. The Bengals, who topped the Las Vegas Raiders in the Wild Card Round, could be missing some key bodies on the defensive line – bad timing for this run-in with run-heavy Tennessee.

Here are our free NFL betting picks and predictions for Bengals at Titans on January 22.

The Under is 5-1 in the Titans' last six games as home favorites. Find more NFL betting trends for Bengals vs. Titans.

Bengals vs Titans picks and predictions

The last we saw of the Tennessee Titans they were scrambling to defeat the lowly Houston Texans with the top seed in the AFC on the line in Week 18. Tennessee allowed a 21-0 lead to evaporate in the second half and it nearly bit the Titans in the ass, holding on for a 28-25 win to earn a direct ticket to the second round of the AFC postseason.

That collapse may have soured football bettors, who were already questioning the Titans’ place atop the AFC, but outside those shaky final 30 minutes of the regular season action, Tennessee has handled its business in 2021 and took down some of the other clubs showcased this weekend, with wins over the L.A. Rams, Bills, Chiefs, and 49ers during the course of the schedule.

The Titans did hit bumps in the second half of the year, especially when Henry went down, but with the bulldozing back teaming up with fellow RB D'Onta Foreman in a rushing attack that saw the second-highest handoff percentage in the league, things are shaping up well considering Cincinnati’s injury woes up front on defense.

As of this writing, DT Larry Ogunjobi is out for the Divisional Round, and DEs Trey Hendrickson (concussion) and Josh Tupou (ankle) are question marks. On the season, the Bengals run stop unit ranks No. 13 in Defensive DVOA at Football Outsiders, but it’s been bullied in the home stretch of the schedule, allowing all but one of its last six foes to amass at least 100 yards on the ground. Over its last three contests, Cincinnati has allowed a beefy 5.9 yards per carry.

If Tennessee has its way on the ground early on, it not only wears down what could be a thin/banged-up Bengals defensive line but also declaws Cincy’s pass rush and opens spots for QB Ryan Tannehill and the passing game to do damage. The added week off not only gave Henry time to mend but this is also the healthiest the Titans’ air attack has been in a long time, with wideouts A.J. Brown and Julio Jones fresh and ready.

The Bengals defense didn’t look great in the Wild Card Round, allowing the Raiders to move the chains at will in the second half. It just so happened Las Vegas whiffed in the red zone, going 1 for 5 inside the 20-yard line. Cincinnati won’t be so lucky Saturday, as Tennessee ranks No. 6 in RZ TD percentage on the year and was 8 for 9 inside the RZ during its three-game winning streak to finish the schedule.

The Titans are a resistant and relentless team, winning six of its nine games after Henry was lost with the broken foot in Week 8. And while the offensive wheels wobbled, Tennessee’s defense stepped up big in the second half of the season, ranking No. 5 in EPA allowed per play since Halloween.

Tennessee has checked seven of its last nine foes to 22 points or less, posting a 3-6 Over/Under mark in that span, and hanging its hat on a run defense that gave up an EPA allowed per rush of -0.119 in those games (eighth lowest) and a success rate per run of only 34.5%.

The big issue for the Titans will be stopping Joe Burrow and the explosive Bengals passing attack. Tennessee has been susceptible to big plays this year despite ranking out 11th in Pass Defense DVOA. And that’s where you’ll find the Titans play defense on offense.

Tennessee plays one of the most methodical paces in the NFL, calling a play every 29.23 seconds (sixth slowest) and if it can get those ground gains with Henry back and the Bengals barfing up yardage, the Titans will attempt to milk every second out of their possessions to keep Burrow on the sideline.

Due to a home-friendly final stretch of schedule, this will be just the third road game for the Bengals since November 21. And one of those trips was a short hop to Cleveland to play the Browns' skeleton crew in Week 18.

Cincinnati wrapped the regular season as one of the better road offenses in the NFL, owning 0.463 points per play as a visitor (second highest). However, that output was skewed by a few cakewalk roadies at Detroit and the New York Jets, where the Bengals posted 34 and 31 points. Throw in a 41-point away effort against a depleted Baltimore defense and Cincy’s road scoring plumped up like it was stung by a bee, hiding lower-scoring days at Chicago (17), Pittsburgh (24), Denver (15), and Cleveland (16).

The Bengals have been able to produce more than 27 points per game on an average of just 61.5 plays an outing (seventh fewest). Cincinnati won’t get nearly as many touches in Tennessee Saturday, with the Titans putting on a TOP clinic.

Bengals vs Titans Divisional Round Picks and Predictions: Henry's Return Bodes Well for Tennessee
Provided by