Underdogs didn't fare well during Wild Card weekend, but things could be different. Jason Logan highlights the Rams pass rush in his Divisional Round Underdogs, which will make Tom Brady's life a living hell without his best protection in front of him. 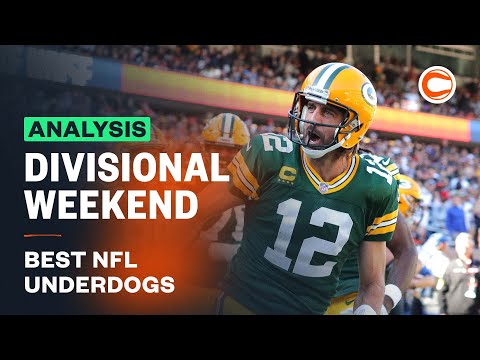 The great thing about betting NFL underdogs in the playoffs is that every team getting the points is a capable team. No more messing with the Jacksonvilles or the Houstons of the world.

Even with underdogs finally falling on their faces in the Wild Card (finishing 1-5 against the NFL odds last week), postseason pups instill a confidence in those clubs getting the short end of the win probability stick.

Hell, the four teams wearing the dog tags in the Divisional Round are a collective 13-5 ATS as pups on the season. And the two rarest underdogs are where we place our NFL picks and predictions for this weekend’s action.

NFL picks against the spread for Divisional Round

This home date with L.A. is a major step up in competition for the defending Super Bowl champs.

In the Wild Card Round, Tampa Bay blasted an Eagles team that fell ass-backward into the postseason thanks to a soft home stretch of schedule and the overall shittiness of the NFC East. And before the tournament even began, the Buccaneers faced few playoff-quality opponents in the final two months of action, narrowly escaping the Bills in Week 14 before losing to the Saints in Week 15.

Not only are the Rams the most complete team Tampa has tackled in a while (ranked No. 5 in Team DVOA), but L.A. has the upper hand upstairs. Los Angeles holds a rare mental edge over the Buccos after roughing them up in their previous two meetings: a 34-24 win in SoFi in Week 3 and a 27-23 victory at Raymond James in Week 11 of last season (with Jared Goff at the wheel).

The cost of last year’s run to the Lombardi and a season’s worth of everyone's best shot is taking its toll on Tampa at the end of this road. The latest injuries are crucial, with the offensive line potentially down two Pro Bowl starters in center Ryan Jensen and tackle Tristan Wirfs (and backup T Josh Wells nursing a quad injury as well). That’s terrible for Tom Brady’s well-being, considering what the Rams pass rush just did to Kyler Murray and the Cardinals.

Los Angeles recorded two sacks, five QB hits, snagged two interceptions (one for a TD), and batted down six passes in Monday's win. The Rams have recorded a total of 22 sacks over their last seven games and did so with a defense that blitzes on 26.6% of dropbacks (11th most), but mostly relies on a ferocious front four to generate that pressure. That’s been Brady’s kryptonite during his career.

As for TB12’s counterpart, L.A. quarterback Matthew Stafford is making just his fifth postseason start on Sunday afternoon after picking up his first playoff victory Monday night. Stafford also faces a vaunted pass rush from the Buccaneers, who bring extra bodies from all over the place – blitzing on a league-high 40.8% of dropbacks.

But unlike Brady, who faces the most feared four-man rush in football without his top two protectors healthy, Stafford says bring on the blitz. The Rams passer enters the Divisional Round ranked No. 1 in EPA per dropback versus the blitz (more than four pass rushers), according to NFL Next Gen Stats. And while his completion rate while pressured isn’t as impressive, he does average almost eight yards per attempt in those situations. Arizona blitzed Stafford on half of his 17 dropbacks in the Wild Card Round and he finished with 13 completions for 202 yards (15.5 yards per completion) and two touchdowns.

The Rams opened as low as +2.5 at most books and are up to +3 with some shops ticking back down to +2.5 before getting buyback on Tampa. Los Angeles is sitting as pricy as +3 (-118) but you can find a flat rate on the dog if you shop around.

This one could be decided by the end of the first quarter if the Chiefs can’t break their bad habit of slow starts in postseason games.

Kansas City once again started with a sputter in last weekend’s Wild Card contest, posting a scoreless first frame and falling behind 7-0 to the Steelers before erupting for 42 points in the final 35 minutes of football.

Looking back on K.C.’s playoff antics since Patrick Mahomes took over under center, the Chiefs have gone scoreless in the first quarter in four of those nine playoff games, trailed in five of those first quarters, and has fallen behind by a touchdown or more in four of those outings, including a 9-0 hole to the Bills in the AFC Championship Game last January.

That lead – and the subsequent 38 points Buffalo allowed in the final three frames – has been living rent-free in the Bills’ minds for an entire year.

The “revenge” factor is not something I buy into with pro sports (especially in the playoffs. Do you really need extra motivation?), but Buffalo has already shown a nasty vengeful streak this season - twice recently - slapping the rival Patriots with unrelenting one-sided squashes after that embarrassing Week 13 loss at home in the wind.

The key to those payback spots: quick starts.

The Bills opened with energy and bad intentions, jumping out to a 7-0 1Q lead thanks to confident fourth-down attempts, which led to a 17-7 edge before the half at Foxborough in Week 16. And most recently, the Mafia went all "horse head in the bed" on Belichick’s guys with a 14-0 1Q start and a 27-0 stranglehold before the Pats put up any points just before the break in the Wild Card Round last Saturday.

Those weren’t the only two times Buffalo has held a grudge. The Bills went back to the scene of last year’s AFC title game loss and handed Kansas City a 38-20 defeat in Arrowhead back in Week 5. While a lot has happened since that Sunday night in October (notably KC’s defense getting healthy), Buffalo now cares about K.C.’s home-field edge about as much as Bills fans care about the table settings at their tailgates.

In some ways, that’s how the Chiefs beat you before even getting on the field. The fear of facing this potent offense – especially in Arrowhead – leaves many opponents to lead with a more passive game plan when they have the football: slowing down, running more often, chewing up possession in hopes of icing Mahomes, and settling for whatever points wherever you can get them – rather than putting Kansas City on its heels.

This spread is moving down quickly as of Wednesday morning, with some shops already at Buffalo +1.5. However, there are still prominent online books holding on to Bills +2.5 (-116), so we’ll take all the points we can in what will be a fast start and fun finish Sunday night.