The Packers have hovered between 4.5- and 5.5-point favorites over the 49ers next weekend. This line may move if San Francisco's Nick Bosa is deemed unable to play. Back the Packers now as part of Jason Logan's Bet Now, Bet Later for the Divisional Round. 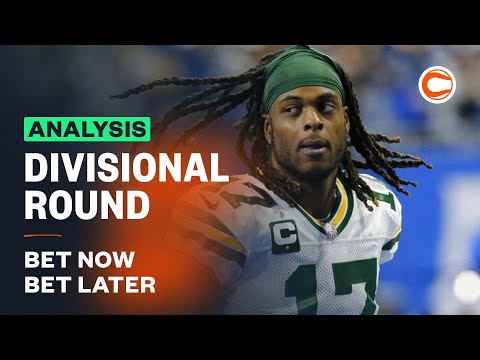 As of this writing, the Wild Card Weekend is still sorting itself out. But if books are going to hang NFL Divisional Round odds, we're going to size them up and see which ones we want to bet now and which ones we'll wait on - projecting line movement - to bet later.

With just four games on the board, NFL bettors will face the toughest and tightest set of spreads and totals of the entire season. That means that not only do you have to be on the right side, but also get the best of the number. We tell you how, with the Divisional Round edition of Bet Now/Bet Later. Good luck.

Green Bay opened between -4.5 and -5.5 after the Niners knocked off the Cowboys Sunday night. The big question going into this divisional round game — and a big reason why bookies parked it on those dead numbers — is the health of San Francisco defensive standouts Nick Bosa (concussion) and Fred Warner (ankle), with Bosa as the big name to keep an eye on.

Should Bosa not clear concussion protocols, the -4.5/-5/-5.5 spreads could flirt with -6 by gameday. As of this writing, we don’t have the Divisional Round game days, but if the schedule makers split up the NFC and AFC games — like they normally do — they won’t have the winner of Arizona/Los Angeles playing Saturday after a Monday Wild Card contest. That gives the Niners one less day to get guys healthy.

Should Bosa get clear before the Divisional Round, this one could come down to Cheeseheads -3.5/-4. While that move could be as many as two points, it doesn’t mean as much pushing through dead numbers of five and four. If you like Green Bay against the spread, you’re just trying to avoid a -6.

In the meantime, we’ll have to sit through all the talk about a California club coming to Lambeau Field in mid-January to play in sub-zero temperatures this coming weekend. On top of that climate crisis, San Francisco will be playing its third straight road game (fourth in the past month) and unlike “neutral-site” games at L.A. and Dallas, the 49ers faithful will have a tough time finding a seat at the frozen tundra.

I’ll be honest. As I type out our “bet later” spread for the Divisional Round, the Chiefs are still devastating the Steelers in the Sunday night Wild Card contest.

Sportsbooks hung a lookahead line of Kansas City -2.5 before that primetime game started and with KC up big in the fourth quarter, bookies reposted the game with the Chiefs -2.5 but juiced as much as -125 at some offshores. Could we see a field goal spread?

Sports bettors do have a short memory and the Chiefs’ one-sided win over Pittsburgh on Sunday is shinier than the Bills’ 47-17 smashing of New England on Saturday night. However, Buffalo’s squash is a bit more impressive considering that spread closed -4.5 and the Chiefs were 12-point chalk.

These two AFC heavyweights dueled back in Week 6, with the Bills taking an impressive 38-20 victory as 2.5-point underdogs in Arrowhead. Given that was part of a slow two-month start for the Chiefs, who were missing key members of the defense and posted a 3-4 SU mark in the opening seven weeks before going 9-1 SU to finish the year.

If you’re circling the wagons with the Buffalo Bills in the Divisional Round, wait and see if the 3-point spread shows its head. It might not be there long, so be ready to strike.

This total opened as low as 48 points while the Rams were rolling over Arizona on Monday night and the eventual 34-11 final pushed that number up an extra half-point to 48.5.

We did see some online books hike this Over/Under as high as 49 and those operators took instant buyback on the Under and dropped to 48.5 points. If you like the Under in this NFC Divisional Round matchup, this is a bet you’ll want to lock in now. As of Tuesday morning, the market consensus is 48.5 with some shops down to 48.

As impressive as the offenses were for Tampa and L.A., those respective defenses were equally as sound. The Buccaneers limited the Eagles to just 15 points and forced three turnovers in the Wild Card Round, and while they’re expecting to get stronger with returnees on defense the offense could be down starting O-linemen Ryan Jensen and Tristan Wirfs for Sunday.

The Rams defense is coming off one of its best days of the season, holding Arizona to a total of 183 yards with two sacks and two interceptions. Los Angeles has allowed an average of just under 17 points per game over its last seven, allowing 24 points or less in regulation in each of those contests.

If you expect all defense in this Divisional Round dance, then you'll want to grab as many points as you can with this total now and buy the Under.

The look-ahead total for this Divisional Round game was as low as 46 points on Sunday night before the matchups were official. That number jumped to 47 and as high as 47.5 points in the 12 hours since Cincy booked its tickets to Tennessee. As it stands on Monday morning, most sportsbooks are dealing the total for Bengals at Titans at 47 (Over -115).

Cincinnati put up 26 points versus the Raiders, but one of those scores came on a controversial call in which the officials blew the whistle in the midst of a passing play, pausing the Las Vegas defenders momentarily as they believed QB Joe Burrow had run out of bounds. That wasn’t the case and the touchdown catch stood.

The Bengals would settle for a pair of field goals in the second half while checking the Raiders to just 19 points, marking the seventh time in the past nine games Cincinnati has limited its foe to 21 points or less in regulation. Now, the Bengals enter the next round with bodies missing on the defensive line (Larry Ogunjobi and Mike Daniels out and Trey Hendrickson questionable with concussion), which could set the table for Tennessee's preferred playbook.

The Titans come into the second round of the postseason well-rested after earning a bye as the AFC’s top seed. Tennessee’s defense has held its own, allowing 22 points or less in seven of its last nine contests, while a methodical offensive pace helps pad those stats.

The Titans run the 27th slowest playbook in the land (29.23 per play) and eat up possession like Nashville BBQ (second-highest average TOP in the league: 32:39). The expected return of stud RB Derrick Henry adds another set of legs to Tennessee’s ground-and-pound approach, which dialed up the run more than 30 other teams despite missing Henry since Week 8. Given Cincinnati's health up front, the Titans run game can chip away, chew up the clock, and park Burrow & Co. on the sidelines.

If you’re thinking Under on this AFC Division Round rumble in the Music City, pause a beat and see if this total goes through 47.5 and to 48 points before buying back.