With kickoff coming soon, the San Francisco 49ers stand as 4-point favorites hosting the Dallas Cowboys in the NFC Divisional Round. We look at the action on that game. 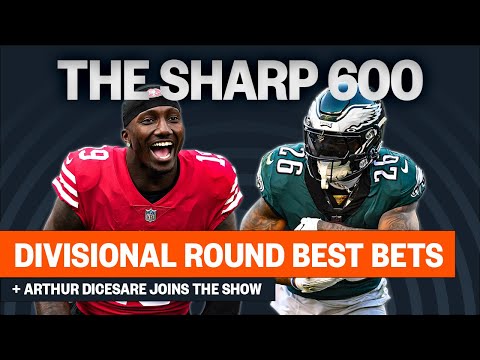 The NFL Divisional Round odds are all in place and pumping with action as we head toward kickoff.

We have NFL odds for the NFL Divisional Round games, and Sunday features two marquee matchups. It all starts with Joe Burrow and the Cincinnati Bengals taking on Josh Allen and the Buffalo Bills, and then the Dallas Cowboys will wrap the weekend up when they face the San Francisco 49ers on the West Coast.

Here's a look at the odds for the NFL Divisional Round, as well as line moves and action reports before kickoff.

These are the live NFL odds for the Divisional Round, highlighting the best odds available from regulated sportsbooks within your area.

Looking to bet on some NFL Playoff action? Here are two of the best bonuses* available:

2:20 P.M. ET, SUNDAY JANUARY 22: With kickoff 40 minutes away, the market is bouncing between Bills -5.5 and -6. Mainstream operators reporting their betting splits for this AFC Divisional Round game are showing one-sided bet count on the Bengals as underdogs, but the handle is more balanced at books like BetMGM and Caesars Sportsbooks are reporting 65% of ticket count on Cincinnati but 65% of the money riding on Buffalo. This total remains at 48.5 points across most operators with books reporting one-sided bet count and handle on the Over.

11:00 A.M. ET, SUNDAY JANUARY 22: This spread is starting to creep as high as Bills -6 on Sunday morning, with Buffalo between -5.5 and -6. Sportsbooks were heavy on Bengals money earlier in the week, but the handle has started to balance out with late-week action on the home side. Cincinnati has ruled out two starting offensive linemen, which has prompted some adjustment to the key number of Bills -6. According to BetMGM books, 66% of bets and 60% of money is taking the points with Cincinnati. As for the total, this Over/Under is sitting as low as 48.5 points. BetMGM is reporting 72% of ticket count and 62% of the handle on the Over.
1:20 P.M. ET, FRIDAY JANUARY 20: After one Vegas book jumped to Bills -6 on Thursday, the market has met a consensus of Buffalo -5.5 on Friday afternoon with one respected online operator holding at Bills -5. The move from Buffalo -3.5 to -5.5 is not as drastic as it would seem, as the line did go through some dead numbers. There is more money coming in on Buffalo over the past two days, as the Bengals have drawn as much as 72% of the bet count but books like DraftKings and BetMGM are reporting handle splits of 59% and 55% in favor of Cincinnati. That’s down from the 67% split on the money reported on Wednesday. As for the total, the Over/Under is sitting between 49 and 49.5 with 78% of bet count and 71% of handle on the Over. The weather in Orchard Park looks pretty good considering it's mid-January, with light winds and temperatures above freezing with possible snow in the forecast for this 3 p.m. ET kickoff.
3:45 P.M. ET, THURSDAY JANUARY 19: Midweek money is jumping on Buffalo and pushing this spread from -5 to as high as Bills -6 at one Las Vegas book. Most shops are dealing Bills -5.5 with flat -110 juice, but some books have increased vig on that spread, indicating a potential market move to -6 as we close in on the weekend.  This total, which opened at 50 points and dropped as low as 48, is seeing some buyback on the Over, which has moved the total to 49 points at some respected online operators. The forecast in Orchard Park was calling for strong winds earlier in the week, but Sunday afternoon’s climate has calmed down, with winds topping out at 10 mph with snow showers and temperatures in the mid-30s.
4:00 P.M. ET, WEDNESDAY JANUARY 18: The spread is bouncing between Buffalo -5 and -5.5, but it’s the total making moves in the middle of the week. This Over/Under opened at 50 points and is now as low as 48 points on Wednesday afternoon. The forecast for Sunday in Orchard Park is still calling for sub-freezing temperatures and possible snow showers, but the expected winds have calmed from early projections. Winds are now forecasted to top out at 16 mph and will calm even further in the second half. That has some books up to 48.5 with this total. According to DraftKings, 79% of bets but just 59% of the handle is banking on a high-scoring finish between the Bills and Bengals.
8:40 A.M. ET, TUESDAY JANUARY 17: The Bills continue to balloon as favorites, with this spread pushing through -3.5 to as high as Buffalo -5 on Tuesday morning. With the spread going through dead numbers – tempering the importance of this line move – we could see it peak at -5.5 if money on the host Bills doesn’t slow down. As for the total, this number hit the board as low as 49.5 and has climbed to 50.5. Weather for Orchard Park on Sunday is calling snow showers and temperatures feeling like 21 degrees thanks to winds of 24 mph with wind gusts of 35 mph on Sunday afternoon, according to Accuweather.
1:26 P.M. ET, MONDAY JANUARY 16: After slimming to as low as Bills -3 on Sunday night, the spread for this highly anticipated AFC rematch has seen a bit of buyback on the Bills, stretching the spread to a mix of -4 and -4.5. The total opened at 50, and a few books have bumped the number to 50.5 as of Monday afternoon.
11:30 P.M. ET, SUNDAY JANUARY 15: The Bills and Bengals will meet after having their Week 17 matchup suspended and then canceled following the Damar Hamlin incident. Cincinnati was a short home underdog in that matchup, closing between +1 and +2.5. The opening odds for this AFC Divisional Round game saw Buffalo as big as -6 at FanDuel immediately following Cincinnati’s win over Baltimore, but the market quickly swung to -3.5 with the line as low as -3. Both teams enter this matchup off closer-than-expected finishes in the Wild Card Round, but the Bengals do have injuries mounting on the offensive line.

11:00 A.M. ET, SUNDAY JANUARY 22: As of Sunday morning, San Francisco is a market consensus 4-point home favorite with some expensive -3.5 lines still available at select sportsbooks. The Niners are drawing 63% of the bet count but the handle has started to balance with 58% of the money on the host side after sitting much higher in favorite of San Francisco earlier in the week. The total is sitting as low as 46.5 points, with BetMGM reporting 72% of bets and 80% of handle banking on the Over.

1:30 P.M. ET, FRIDAY JANUARY 20: With the weekend almost here, San Francisco is a 4-point favorite at most shops with a few expensive -3.5 lines still available. The 49ers are the more popular pick, drawing 65% of bet count and 67% of the money at DraftKings while BetMGM books are reporting 69% of ticket count and 62% of handle on the home favorites. This total hasn’t moved much since opened at 46 points, currently sitting at 46.5 with one respected shop hanging 47 O/U. According to BetMGM, 65% of bets and 69% of the money is riding on the Over in this Divisional Round finale.
4:00 P.M. ET, WEDNESDAY JANUARY 18: After bouncing between San Francisco -3.5 and -4 in the first 48 hours of action, the market consensus has settled with 49ers -3.5 for Sunday night’s Divisional Round finale. According to DraftKings books, 68% of the bet count and 73% of the handle is laying the points with the Niners. The Over/Under is sitting between 45.5 and 46 points, with 76% of tickets and 72% of money backing the Over.
9:00 A.M. ET, TUESDAY JANUARY 17: Coming off an impressive win at Tampa Bay on Monday, Dallas opened as a 4-point road underdog in San Francisco and was quickly bet down to +3.5 with early opinion on Dallas. However, that line didn’t last long as the 49ers' action bumped the spread back to San Francisco as a cheaper 4-point home chalk. The total opened at 46 points late Monday night and is down to as low as 45 points at some online shops on Tuesday morning. The forecast for Santa Clara is calling for clear skies and temperatures in the mid-40s, with wind gusts topping out at 13 mph.

Looking for our favorite spread, total, and NFL prop bets for this week's action? Check out our best free NFL picks from the Covers staff!