We have a big college football matchup in the Big Ten West as the 2-0 Wisconsin Badgers visit one of the bigger surprises in the conference, the 4-0 Northwestern Wildcats.

The Badgers have demolished both opponents in their COVID-shortened schedule, but will now face what should be a much tougher test from the Wildcats. Oddsmakers have the Badgers as 7.5-point betting favorites, will they be able to cover that number against a stingy Wildcats defense?

Let’s take a look at our best college football predictions for No. 12 Wisconsin vs. No. 20 Northwestern, with kickoff scheduled for Saturday, November 21 at 3:30 ET.

It could be a wet afternoon in Evanston. The forecast is calling for showers leading up to kickoff, with a chance of them tapering off as the game moves along. Temperatures will sit around the low-40s with a cross-field wind of about 10 mph coming in from Lake Michigan. Be sure to monitor the gametime conditions with our NCAA football weather info.

Well, Wisconsin sure has had an interesting 2020. The Badgers opened the year with a resounding 45-7 victory over Illinois, easily covering as 20.5-point favorites. Then starting quarterback Graham Mertz (and what sounds like half the program) got COVID-19 and the Badgers didn’t play again for three weeks. But when they returned against Michigan it looked like they hadn’t skipped a beat, trouncing the Wolverines 49-11 as 11-point chalk.

What may be most impressive is the ways in which Wisconsin won. Against Illinois, the Badgers rode Mertz’s arm, as the freshman threw for 248 yards with five touchdowns and no interceptions. While against Michigan it was the Badgers’ run game that took over, as the team rumbled for 341 yards at a clip of 6.7 yards per carry. Oh, and the defense that Wisconsin is always known for is still doing its thing, allowing just 218.5 total yards per game and giving up just 9.0 points per contest—both the best in the nation.

Northwestern, on the other hand, has already matched last year's win total of four by getting back to what they were good at—playing defense and grinding out the clock with a solid run game. The only problem is, Wisconsin is basically just a better version of Northwestern. The Wildcats also haven’t faced a very daunting schedule to this point, with their toughest game coming against an inconsistent Iowa team that they probably should have lost.

Northwestern has a strong defense, no doubt. They rank 11th in total yards allowed per game and are giving up just 14 points per contest. But they can’t match Wisconsin on offense, and the balance the Badgers will bring to the table will eventually wear down the Wildcats. Bet the Badgers to keep rolling.

A quick glance at this matchup and your first thought might be “defensive battle.” The total doesn’t do anything to dispel that, sitting at 44 as of Wednesday night. But hold your horses before you go running to the betting window to bet the Under.

Northwestern has some strong defensive numbers and is giving up just 14 points per game, but here is the ranking of its opponents when it comes to points scored per game: 70th, 46th, 112th and 89th.  And as we’ve noted, Mertz gives the Wisconsin offense a whole new dimension. While the Badges might not put up 40-plus points for the third consecutive game, they’ll do the heavy lifting to get this game Over a relatively low total.

Wisconsin has gotten off to tremendous starts in each of its first two games. The Badgers led Illinois 28-7 at halftime and went into the break with a 28-0 lead over Michigan. While Northwestern has done a decent job of scoring in the first half, facing the Wisconsin defense will be a completely different challenge. Take the Badgers to cover the first half spread.

Did you know that if you parlayed today’s NCAA Wisconsin vs. Northwestern picks, you could win $58.14 on a $10 bet? 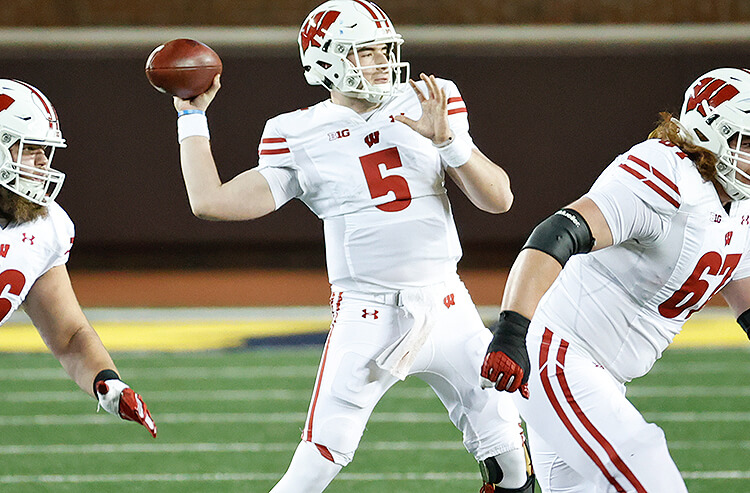 Wisconsin vs Northwestern picks and predictions November 21
Provided by