Indiana vs Ohio State picks and predictions for November 21

Who would have thought that Indiana versus Ohio State was going to be one of the most important Big Ten games of the year once the college football betting season finally got underway?

But that’s exactly the case as the No. 10 Hoosiers head to the Horseshoe in Columbus to take on the Buckeyes. Even though the Hoosiers are ranked, they still have a tall task in front of them as college football odds have the Buckeyes as nearly three-touchdown favorites.

Let’s take a look at our best college football predictions for Indiana vs. Ohio State, with kickoff scheduled for Saturday, November 21 at 12:00 ET.

It should be a cloudy, yet otherwise nice, fall day for football in the Midwest. The forecast is calling for overcast skies with temperatures in the mid to high-50s and minimal wind. Be sure to monitor the gametime conditions with our NCAA football weather info.

It may seem a bit crazy, but a lot of the trends are in Indiana’s favor. The Hoosiers are a perfect 4-0 ATS on the season, they are 5-0 ATS in their last five trips to Columbus, and the underdog is 7-2 ATS in the last nine meetings. Find more NCAA betting trends for Indiana vs. Ohio State.

Indiana continues to impress with each passing game. Last week was a second potential “letdown” spot after a big win over Michigan, but all the Hoosiers did was go out and squash Michigan State 24-0, easily covering as 7.5-point favorites. It was Indiana’s fourth straight cover to start the year and the Hoosiers have gotten here thanks to solid quarterback play from Michael Penix Jr. and a suffocating defense.

Penix Jr. has completed 61 percent of his passes for 1,070 yards with nine touchdowns and three interceptions, while adding a pair of scores on the ground. While the defense ranks in the Top 20 in total yards allowed per game and is surrendering just 19.3 points per contest.

Meanwhile, the Buckeyes are, simply put, one of the three best teams in the country with one of the best players in the country in Justin Fields. Each time he plays he looks more and more like a lock to go No. 2 in the NFL Draft behind Trevor Lawrence.

The Buckeyes junior QB is completing a ridiculous 87 percent of his passes for 908 yards with 11 touchdowns and no picks through Ohio State’s first three games. The running game is also starting to come around with Master Teague III and Trey Sermon leading the way.

If there is a weakness for the Buckeyes, it’s their defense. They are giving up too many yards in the passing game and aren’t creating a lot of takeaways. But they certainly have the talent to turn things around.

The Buckeyes' overall talent and the one-dimensional nature of the Hoosiers’ offense will prevent Indiana from pulling off an upset. But Penix Jr. has been really good and looks better each time he steps on the field—he should be able to do just enough against a secondary with a few question marks to keep this one within the number.

The total for this Big Ten battle has already risen two points to sit at 66 as of Tuesday night, but is that number now high enough for us to take a look at the Under?

Well, first off, this is a difficult number to break down. The Buckeyes average 46.3 points per game this season, but Indiana is clearly the best defense they have faced all year, with the next best being Penn State. In that game against the Nittany Lions, the Buckeyes still put up 38 points.

Second, Ohio State is allowing 23 points per game so far this season and has given up 25 or more points in each of its last two games, which came against Penn State and Rutgers...not exactly world-beaters on offense this season.

Third, while Indiana has allowed just 19.3 points per game, they clearly haven’t faced anyone like Fields and Ohio State. If we take a closer look at the Hoosiers schedule, it doesn’t hold up as well with each passing week. Penn State is still winless. Michigan looks like it doesn’t care about playing football at the moment. And Rutgers and Michigan State might be two of the worst teams in the conference.

This game might be very similar to Ohio State’s game against Penn State, and that game total got a push at 63. This game really has a 42-24 kind of feel to it, but the way Tom Allen has this Hoosiers team playing, they’ll come in fighting and do just enough to send this number Over.

The issues with the Ohio State defense means we will take a hard look at the Indiana team total. “Issues” obviously is a relative term for the Buckeyes, but as mentioned before their pass defense hasn’t been as strong as they would like, allowing more than 220 yards per game through the air, which has led to giving up an average of 26 the last two games.

Additionally, Penix Jr. is the most dynamic quarterback they have faced this year (I don’t want to hear anything from you Adrian Martinez fans) and we are getting a good number here. Take the Over. 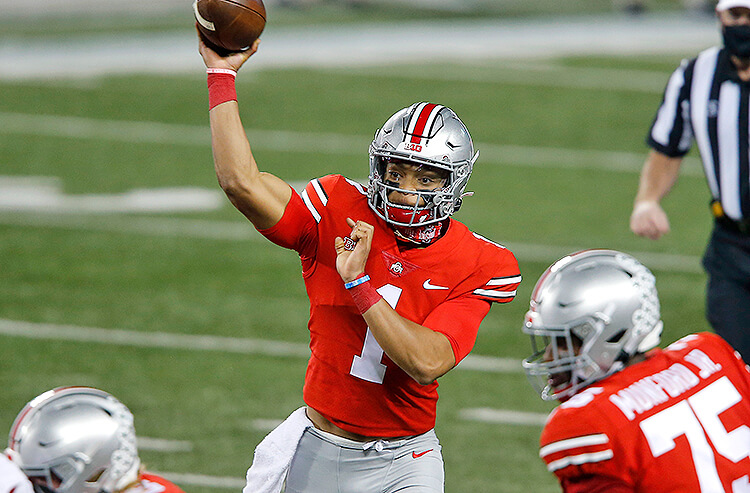