Guys, I just discovered the most amazing college football betting nugget in years. Maybe I’m behind the curve and everyone knows this but me, but did you realize that the annual game between Kansas State and Iowa State is known as “Farmageddon?!”

That’s right. The winner of this annual BARNYARD BATTLE gets to slaughter a fat, willing pig and feast upon it in a raucous victory celebration, while the losing team must construct a working grain silo at the opposing university within a week’s time. Now THAT’S a rivalry!

Here’s a look at our best college football free picks and predictions for Kansas State at No. 16 Iowa State, with kickoff slated for 4:00 ET in Ames, Iowa.

It’s not going to be a great day to watch football – or tend to the crops – on Saturday. Look for a high of 48 degrees with wind out of the north at 13 mph. We could see some showers as well, with an expected 35 percent chance of rain. Be sure to monitor the gametime conditions with our NCAA football weather info.

It’s been a rough road for the Wildcats, much like that dusty dirt pathway leading to the nearest pasture that farmers who follow this matchup know all too well. Up early as the sun rises, making sure the cows and chickens are fed, and then smacking the dust off their faded overalls as they settle in just in time for the big game.

Kansas State has lost two straight, but the Wildcats put up a fight against Oklahoma State two weeks ago, falling 20-18 with backup quarterback Will Howard entrenched as the starter, now that Skylar Thompson is out for the season. K-State outgained the Cowboys in that matchup, with 370 total yards compared to Oklahoma State’s 256.

The Cyclones continue to lead the way in the Big 12, escaping with a 38-31 win against Baylor two Saturdays ago. While quarterback Brock Purdy was a dark horse Heisman candidate coming into the season, he hasn’t met those expectations, much like a prized heifer doesn’t quite command the price you expected at auction. Purdy threw three interceptions last week but thankfully running back Breece Hall stepped up with 133 yards rushing.

The underdog is 6-0 in the last six games in this series, and while the Wildcats aren’t a great team, they don’t quit, and this double-digit spread is far too high.

Iowa State can throw the ball when necessary, but they’re most successful when Hall gets his carries, and I expect him to be the focus of the Cyclones offense.

Kansas State will be ready for such a challenge, having already faced the dangerous rushing tandem of Chuba Hubbard and L.D. Brown last game and the Under is 7-1-1 in K-State’s last nine games following a straight-up loss.

With less-than-ideal weather and Purdy underperforming this season, I’m looking at an ugly Iowa State win that is closer than the Cyclones anticipate, and I don’t think they hit their team total.

Just don’t bet the farm on it. 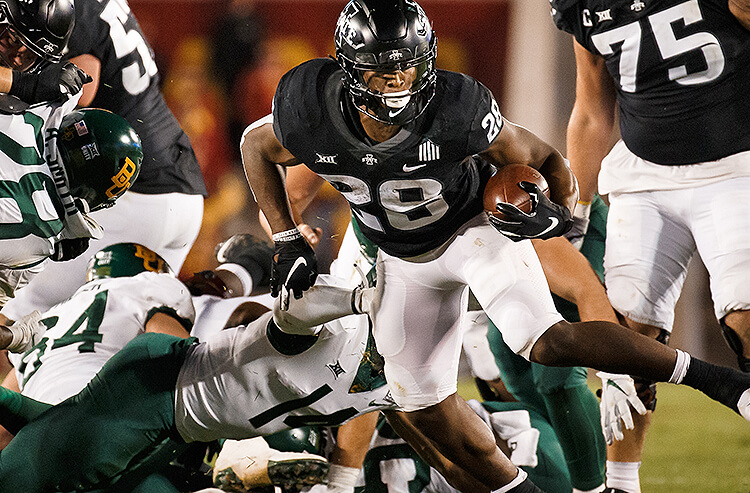