Tennessee vs Auburn picks and predictions for November 21

It’s an SEC showdown of teams coming off of COVID-imposed byes as the Tennessee Volunteers visit the Auburn Tigers in college football betting action Saturday.

Tennessee upset Auburn 30-24 as 14.5-point underdogs when these teams last met in 2018 and the Volunteers will need another strong performance if they want to do it again, as college football odds have them as 11-point underdogs this time around. Can the Vols pull off another shocker, or will the Tigers exact some revenge?

Let’s take a look at our best college football predictions for Tennessee vs. Auburn, with kickoff scheduled for Saturday, November 21 at 7:00 ET.

It should be a beautiful night for football at Jordan-Hare Stadium. The forecast is calling for mostly clear skies with temperatures in the mid-50s and minimal wind. Be sure to monitor the gametime conditions with our NCAA football weather info.

The extra time off might have been a good thing for Tennessee. The Vols come into this game having lost four in a row, going 0-4 ATS in the process. And frankly, fading Tennessee hasn’t even been a sweat: The Vols have failed to cover the spread by 10, 33.5, 9.5 and 13 points in each of those games.

After what looked like a promising start to the 2020 season, the wheels have come off, particularly on offense. Tennessee is averaging just 274 yards and 14.5 points per game over its four-game skid. QB Jarrett Guarantano has thrown for just over 500 yards in those five games and the run game is averaging just 3.6 yards per carry on the year.

Meanwhile, Auburn hasn’t played since Oct. 31 but it was playing well prior to their COVID time off. The Tigers had won two in a row, outlasting Ole Miss 35-28 as 3.5-point road favorites before thumping LSU 48-11 as one-point home chalk. QB Bo Nix still has his issues, but the Tigers’ offense showed nice balance in those two wins, throwing for more than 230 yards and topping 200 rushing yards in both.

Tennessee has done a decent job on defense, but the offense is too much of a mess to keep up with Auburn in this one. Take the Tigers to cover in this revenge spot.

The total for this SEC showdown is 50.5 as of Thursday afternoon, and the number is that low likely due to Tennessee’s allergy to scoring over the last four games. But this number might be a little too low.

Yes, Tennessee is scoring a hair over two touchdowns per game over this recent four-game stretch, but frankly, it feels like the Vols don’t need to do much more than that for this one to go Over. And while the Auburn defense is showing some signs of improvement, it has still allowed a touch over 381 yards per game over its last four games.

Plus, as previously mentioned, nothing is really going Tennessee’s way right now. It has a solid defensive line, but the run defense has been awful, so look for Auburn RB Tank Bigsby to have a big day. The talented back is averaging nearly six yards per carry, so if the Auburn offensive line can keep Nix upright, you can expect a fair amount of scoring in this one.

Meanwhile, Auburn scored 35 points in the first half of their mini two-game winning streak. Take a stab at the first-half Over in this one. 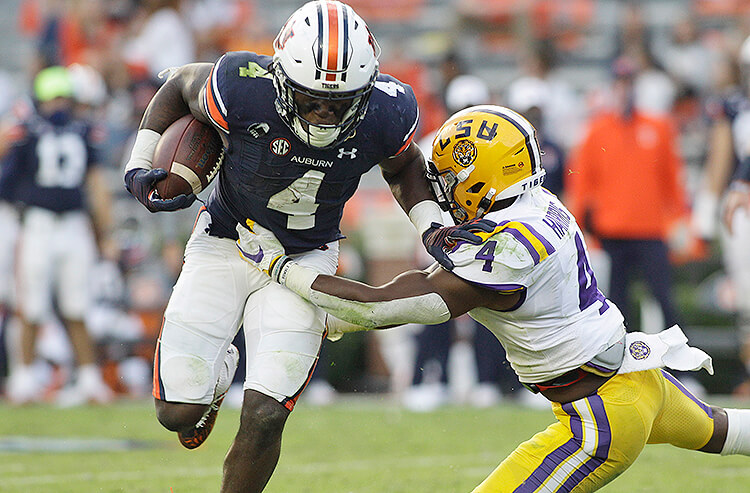 Tennessee vs Auburn picks and predictions for November 21
Provided by