Cincinnati is trying to become the first Group of Five team to make the College Football Playoff and the undefeated Bearcats will get an opportunity to shine up their resume when they visit UCF on Saturday.

This is a position the Knights were in a few seasons ago, and while the 2020 edition of the team isn’t as strong as years past, they still own arguably the most potent offense in the country. Can Cincy make a strong statement to the CFP committee by covering as 5.5-point road favorites?

Let’s take a look at our best college football predictions for Cincinnati vs. Central Florida, with kickoff scheduled for Saturday, November 21 at 3:30 ET.

It should be a beautiful afternoon for some AAC football. The forecast in Orlando is calling for mostly clear skies, with temperatures sitting in the mid-70s for game time. Bettors should take note of an expected 10-15 mph wind blowing towards the southwest corner of the stadium. Be sure to monitor the gametime conditions with our NCAA football weather info.

The Under is 4-0 in Cincinnati’s last four road games and 4-1 in the Bearcats' last five meetings versus UCF. Find more NCAA betting trends for Cincinnati vs. Central Florida.

There is a thought that if Cincinnati wants to actually convince the College Football Playoff committee to let it into the big dance, they’ll have to win and do it with some gusto. Some style points if you will, and that’s exactly what the Bearcats are doing.

What’s the old saying? Good teams win...but great teams cover. Well, Cincinnati is 5-2 ATS for the season, having covered its last four games and covering those spreads by an average of just over 22.5 points. And the Bearcats' average margin of victory this season is nearly 30 points per game.

So, how is Cincy doing it? While the Bearcats have been known for their defense in recent years (and they again have a very good defense), they now have an offense to go along with it. The Bearcats are led by QB Desmond Ridder, a dual-threat QB that has thrown for 1,483 yards with 14 touchdowns, against six interceptions, while completing nearly 67 percent of his passes. Ridder has also added 469 yards and nine scores on the ground as RB Gerrid Doaks paces a rushing attack that averages a ridiculous 6.4 yards per carry.

They’ll face a UCF team that ranks 93rd in the country in yards allowed per game, which includes allowing opponents to rumble for almost 190 yards per game on the ground.

If the Knights want to win this ball game, it will all ride on the arm of QB Dillon Gabriel. The sensational sophomore has already thrown for 2,774 yards with 23 touchdowns and just two picks this season to lead a UCF offense that ranks first in the nation in total yards (619.1) and passing yards (396.9) per game.

But this game will be Gabriel’s toughest test, going up against a Bearcats pass defense that ranks 20th in total yards allowed, seventh in opponent completion percentage and fifth in interceptions.

Gabriel will do his best to keep up with Cincinnati, but the Bearcats have already shut down good offenses this year and in the end, UCF’s deficiencies on defense will be too much for them to overcome. Hop on this number before it gets to -6 or higher.

At 63.5, this is the lowest total UCF will have seen since its season-opening game against Georgia Tech, which closed at 63. Since then the lowest total has been 71, but just because the Knights have a high-octane offense doesn’t mean they are an Over darling, going 3-3 O/U in AAC action and having cashed the Under in two straight games.

Cincinnati, on the other hand, will face the highest total they have seen all season by 6.5 points. In the Bearcats' three games against good AAC offenses (Houston, Memphis, Southern Methodist), there was an average total of just over 55.5 and those games went 1-2 O/U, seeing an average of 54 points per game. Now, expect the Knights to put up a few more points, but this number is just a touch too high.

Additionally, Cincinnati won this matchup last season by a 27-24 score, going Under the total of 64 and the Under is 4-1 in the last five meetings. We like that trend to continue.

That equates to just 2.3 points per game. With the Bearcats averaging over a touchdown in the first quarter this season, they are a good bet to open the scoring.

Did you know that if you parlayed today’s NCAA Cincinnati vs. Central Florida picks, you could win $55.60 on a $10 bet? 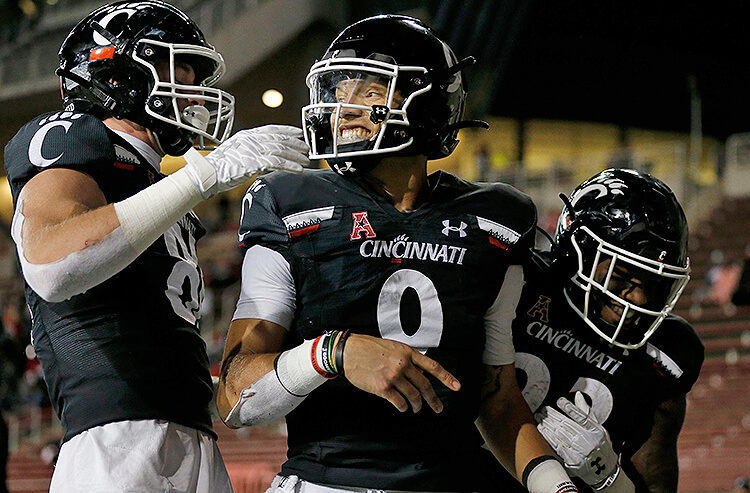