Florida State, 14th in the nation in adjusted offensive efficiency, finally started to flex its muscles in dropping 47 points in the second half against Colorado to advance to the Sweet 16. 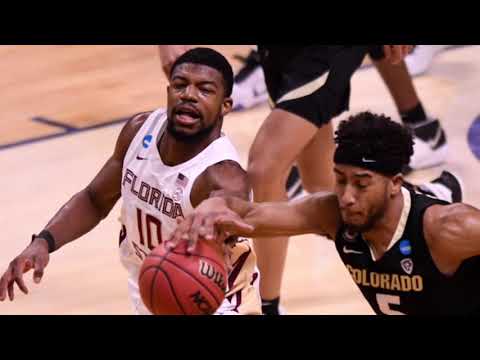 While many brackets have been blown to bits, a sliver of the East Region has gone according to plan with the No. 1 Michigan Wolverines taking on the No. 4 Florida State Seminoles in the Sweet 16 of the NCAA Tournament on Sunday.

Michigan, which advanced past the first weekend of the Big Dance with an impressive win over No. 8 LSU on Monday, opened as a 2.5-point college basketball betting favorite over Florida State, which rode a second-half surge to trounce No. 5 Colorado in the Round of 32.

Here are our free March Madness picks and predictions for Florida State vs. Michigan on Sunday, March 28.

As of 2 p.m. ET, three hours before tipoff, Michigan is down to -2 after opening -3 late Monday night at William Hill US. It's two-way action on the point spread, with Michigan taking 58 percent of tickets and Florida State nabbing 57 percent of money. The total tumbled from 146.5 to 142.5, with ticket count almost dead even and the Under drawing 66 percent of money.

The Wolverines were able to wear down LSU over 40 minutes on Monday night, playing a physical style on both ends of the floor and winning the war on the boards against an athletic Tigers team.

It was Michigan’s ball movement and patience on the offensive end that really dropped the game into a low gear, with the Wolverines recording 22 assists on 28 made field goals. While UM had success chopping down a suspect LSU defense, Florida State presents a different challenge.

Leonard Washington loves to switch up his looks on the defensive end, mixing man, zone and hybrid strategies to keep opposing playbooks scrambling. The Seminoles force teams to play beyond their planned sets and freestyle with the basketball—something Michigan isn’t exactly great at.

Florida State allows less than 12 assists against per contest and can hold their own on the glass when the Wolverines do toss up misses. The Noles own a rebound rate of 53.3 percent (38th) and have the size and experience to match up well with Juwan Howard’s squad.

Offensively, FSU has stalled over the past month and notably struggled away from Tallahassee. However, the Seminoles showed flashes of their dynamic offense in the second half versus a very good Colorado defense, pouring in 47 points in the final 20 minutes of the game.

The slow start to FSU’s win over Colorado and Michigan’s defensive prowess (ninth in adjusted defensive efficiency) isn’t spooking those setting March Madness odds from posting a high number for this Sweet 16 Over/Under. And why should it? There’s a ton of scoring depth on both sides, who shot well from the floor in their respective Round of 32 wins.

The Wolverines made almost 54 percent of their looks against LSU, with a 10-for-25 night from beyond the arc. They hit 9 of 26 triples in the opening-round win over Texas Southern and come into the second weekend of the NCAA Tournament boasting the eighth-highest offensive efficiency metric at KenPom.com.

The Seminoles, who hit at a 52-percent clip on Monday, finally started to look like themselves for the first time in a long time in the second half versus the Buffaloes. Florida State, which sits 14th in that same offensive efficiency rating, is a versatile attack that can score buckets in various ways with various players. Hamilton is rich with depth as well, sitting 23rd in bench minutes and going way down the pine for capable support.

Another reason to like the Over in this Sweet 16 showdown is that this will be a physical battle, so expect plenty of whistles. And that means points from the foul line with the clock stopped. Florida State went 17 for 21 from the stripe versus Colorado while Michigan finished 20 of 25 from the line in the win over LSU.

Don’t let FSU’s 24-point first half versus Colorado fool you: This team wants to explode out of the gate. The Seminoles averaged 39.8 first-half points in the regular season – sixth-most in the country – outscoring foes by an average of 9.2 points per game in those contests.

The postseason has seen FSU’s opening half attack slowed a bit, with tallies of 35, 30, 29 and 24 on Monday night. However, the Noles got their groove back against the Buffs and should hit the ground running in the opening minutes of the Sweet 16.

Michigan gave up 42 first-half points to LSU in the Round of 32 and watched slow-motion Maryland score 38 points in the opening 20 minutes during the Big Ten Tournament.

Did you know that if you parlayed today’s March Madness Florida State vs. Michigan picks, you could win $54.70 on a $10 bet? 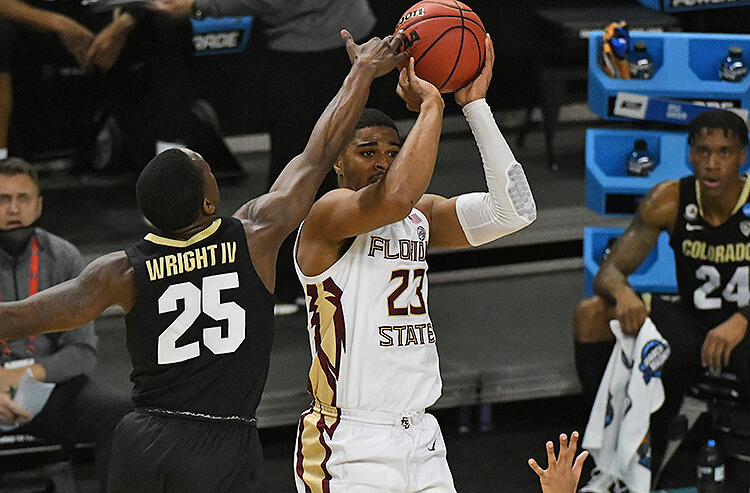