Top 10 March Madness Upsets & How to Predict Them: Peacocks Pull Off All-Time Stunner in 2022

The 2021 NCAA Tournament was loaded with upsets and there's already been a few stunners in 2022 — including one of the biggest bracket busters ever. What else is on deck in 2022? We look at the biggest upsets since 2000 and how to predict potential upsets.

If there’s one thing March Madness is known for it’s the upsets.

We've already had a number of double-digit seeds defy the March Madness odds in 2022 already, with an 11 seed, two 12 seeds, and another 15 seed (more on that below) already causing bracket havoc.

Upsets are a huge reason why basketball fans love betting on March Madness and you'll need to select a few if you plan on winning your bracket contest. With the 2022 tournament now underway, we recount the biggest March Madness upsets ever — plus some tips on how to identify more possible upsets this year.

The 10 biggest March Madness upsets since 2000:

Funny enough, a pair of Duke losses tie for the 10 biggest upsets since 2000. It’s even funnier if you’re among the legions of Duke haters.

The No. 1 Blue Devils blew a 17-point lead to lose 74-73 to the No. 5 Hoosiers in the Sweet 16 of the 2002 tournament - a finish best known for Jay Williams missing the free throw on a potential game-winning 4-point play.

Twelve years later, the No. 3 Dukies were stunned 78-71 by No. 14 Mercer in the Round of 64 with the little-known Bears out of the Atlantic Sun Conference cashing in as +850 moneyline underdogs. This upset was just two years removed from the Blue Devils’ loss to Lehigh as 11.5-point chalk in the opening round of the 2012 tournament.

The No. 4 Shockers were established March Madness mavens at this point, garnering a lofty 13.5-point spread versus No. 13 Marshall. The Thundering Herd exploded out of the break and dropped 47 points in the final 20 minutes of the game to win 81-75.

The No. 4 Hoyas couldn’t employ their methodical offense and got run out of the gym by the up-tempo Bobcats, who scored 97 points en route to this No. 14 over No. 4 upset. Ohio paid out at +900 on the moneyline.

The Hoyas didn’t learn their lesson from four years earlier and found themselves in a pace mismatch with one of the most exciting teams in college hoops that season. The No. 15 Eagles lived up to their nickname “Dunk City” and wore the wheels off No. 2 Georgetown with 54 points in the second half.

No. 14 UAB was a near +1,000 moneyline underdog for its Round of 64 date with No. 3 ISU. The Cyclones just couldn’t get right and finished with only 59 points after ranking ninth in scoring on the season. It was their lowest single-game output all year. That’s bad timing.

The No. 3 Jayhawks went 1 for 11 from beyond the arc and turned the ball over 13 times, leading to one of the biggest March Madness upsets of all time. The No. 14 Bison, out of the Patriot League, cashed in as +820 moneyline long shots with their 64-63 victory over KU.

The freshest big betting upset on the list saw the No. 2 Buckeyes turned the ball over 16 times and make just 5 of 23 from beyond the arc while the No. 15 Golden Eagles coughed the ball up only six times and dropped 11 triples, stunning Ohio State 75-72 in overtime as 15-point pups in the Round of 64 of the 2021 NCAA Tournament. Oral Roberts’ dynamic duo of Max Abmas and Kevin Obanor combined to score 59 of the team’s 75 total points, including 10 collective 3-pointers.

The No. 15 Blue Raiders sparked the shredding of brackets everywhere when they KO’d tournament favorite No. 2 Michigan State in the opening round of the 2016 Big Dance. Middle Tennessee State won 90-81 with 33 of those points coming from 3-point land and was around a +2,000 moneyline underdog to win outright. Many books didn’t even bother posting outright odds, with MSU as high as -9,000 ($100 bet would win $1.11).

The No. 2 Cyclones suffered another power outage in this opening-round flop against No. 14 Hampton. Iowa State went 6 for 16 from the foul line and coughed the ball up 17 times in a dismal 58-57 loss to the MEAC champion Pirates.

Not only does this overtime thriller count as one of the biggest upsets based on the closing line — 18.5 points — but also because the Kentucky Wildcats were on the shortlist of National Championship contenders.

UK coach John Calipari, famous for having a team full of one-and-done freshmen, had one of his most veteran-laden squads in recent memory as the Wildcats entered the 2022 tournament as the third-biggest favorite to win the national title.

They were expected to cruise past the MAAC champion Peacocks but Saint Peter's hung around by playing incredible defense: Kentucky star Oscar Tshiebwe scored 30 points on 11-of-16 shooting but the rest of the roster combined to shoot just 32.6% from the field (15-for-46) — including 26.7% from three — as neither team held a lead larger than six points.

The Peacocks managed to force overtime, where Kentucky crumbled, going 1-for-7 on free throws, while Saint Peter's outscored UK 14-4 over the final 3:23 of the extra frame to pull off the upset.

Not bad for a school with an enrollment of about 3,500 that was making just its fourth NCAA Tournament appearance ever.

This upset marked the first time a No. 1 seed lost to a No. 16 in the history of the NCAA Tournament. The Cavaliers’ methodical tempo got in trouble when UMBC went on a 20-6 run in the first five minutes of the second half. Virginia didn’t have the pace or firepower to battle back and lost 74-54 – an incredible 40.5-point cover by the underdog.

That surprising result not only busted brackets and burned UVA backers, but also torched a ton of live bets banking on the Cavs to complete the comeback. The Retrievers were pegged as high as +2,500 moneyline underdogs at some Las Vegas sportsbooks.

Norfolk State played a near-perfect game, shooting 62.5 percent in the second half and turning the ball over only 11 times versus Missouri’s famed pressure defense. The Spartans opened the game on a 15-7 run and never allowed the Tigers to get more than four points ahead on the scoreboard in the back-and-forth contest.

"We were looking for a big long-shot to bet, and the odds on Norfolk State seemed too high,” Derek Daniels, who bet $40 on Norfolk State at 45/1 odds (winning $1,800), told Covers back in 2012. “Everybody near the counter laughed when we made the bet, including ourselves. We still can't believe it hit."

The average number of upsets each year

On average, there have been 12.7 total upsets each year at the NCAA Tournament since the field expanded to 64 teams in 1985, per NCAA.com. This is assuming that an upset is defined as when a team two seeds lower beats a higher-seeded team (i.e. a nine seed beating an eight seed would not be considered an upset). The most total upsets in one tournament was 19 at the 2014 tournament and the fewest was four at the 2007 tournament.

When building out your bracket, you may want to consider the average number of upsets per round:

As we saw above, most of the upsets at March Madness come in the First Round — which really shouldn't be a surprise as the First Round has the most amount of games. But nailing the First Round upsets also helps you shape your bracket, so it's crucial to get a few of these right. Let's have a look at each of the First Round matchups (all numbers since 1985 and courtesy NCAA.com).

Don't even bother slotting one of these upsets into your bracket  — it has only happened once in tournament history (0.7 percent of matchups) when UMBC shocked Virginia in 2018.

This has been a bit more common, occurring nine times (6.4 percent) since 1985, including No. 15 Oral Roberts stunning No. 2 Ohio State in the opening round of the 2021 NCAA Tournament and Saint Peter's knocking off Kentucky in 2022.

Now we're climbing over 21 percent (21.4 percent to be exact) as a No. 13 seed has won 30 times in the First Round. This happened once in 2019 when UC Irvine beat Kansas State and most recently occured in 2021 with No. 13 Ohio stunning defending champ No. 4 Virginia.

This happens just slightly more often than the 12-over-5 upset at a clip of 38.6 percent or 54 total times since 1985. Two No. 11 seeds have not only won their opening round matchup but also advanced to the Sweet 16 of the 2021 NCAA Tournament: UCLA and Syracuse.

This has been the most common upset, happening 57 times or 40.7 percent of the time, which shouldn't be a surprise as these teams are more evenly matched on paper.

When looking for teams to circle as having the potential to pull off an upset, here are a few factors to consider:

Most March Madness upsets involve schools from smaller conferences, so it’s tough to measure the level of competition. However, many mid-majors will take on power-conference opponents during non-conference play at the beginning of the schedule. Go over any early games against notable opponents and see how those small schools held up.

Pace and tempo are big X-factors that have played into plenty of March Madness upsets. Get a grasp on a team’s style of play and how it clashes with its opponent, and whether it can impose that pace and style in the opening matchups.

For a March Madness upset to occur, the underdog usually has to play near-perfect basketball. That means making big shots and not leaving any points on the table. A number of notable NCAA Tournament shockers have been fueled by hot hands beyond the arc and solid free-throw shooting. Measure those two metrics when scanning for potential upsets.

Fans of March Madness can likely name some small-conference stars from years past off the top of their heads (Ali Farokhmanesh anyone?). Those lesser-known talents jumped into the national spotlight following notable NCAA Tournament upsets but had been making plays for their respective programs all season long. Sometimes having the best player on the floor is all you need to spark a Big Dance shocker, so take a close look at the big guns from the small conferences.

March Madness is a popular time of the year for sports bettors. Every betting site will offer March Madness odds but the top sites are safe and secure, offer a wide range of banking options, and give you a ton of markets for each game. Check out the best March Madness betting sites in your region.

In 2012, Norfolk State upset Missouri as 21-point underdogs in what we feel was the biggest upset in March Madness history.

Yes, nine No. 15 seeds have beaten No. 2 seeds in the NCAA Tournament. 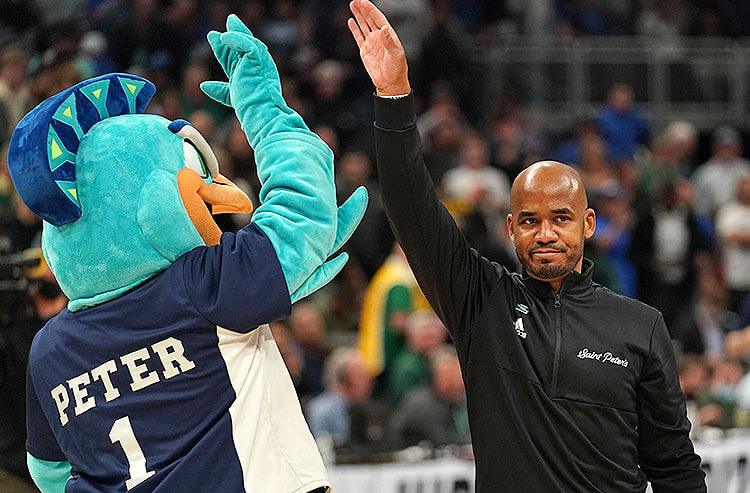 Top 10 March Madness Upsets & How to Predict Them: Peacocks Pull Off All-Time Stunner in 2022
Provided by