Oregon vs USC Sweet 16 Picks: USC's Size Too Much For Ducks 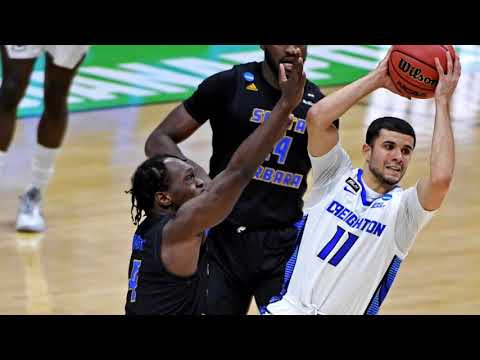 The West Region of the Sweet 16 features a Pac-12 battle between the Oregon Ducks and the USC Trojans. While the Big Ten and Big 12 received all the hype for much of the season, only one team from each of those conferences remains in the NCAA Tournament—while the Pac-12 has four schools still standing.

Oddsmakers are expecting a close battle between these West Coast foes, with college basketball betting lines opening with Southern California as a slim 1-point favorite.

Here are our free March Madness picks and predictions for Oregon vs. USC on Sunday, March 28, with tip-off at 9:45 p.m. ET.

PointsBet USA pegged Southern Cal a 1-point favorite at the outset late Monday night, stretched to -2.5 by lunch hour Tuesday, then dipped to -2 Thursday and is still there at 7:15 p.m. ET Sunday evening, two-plus hours before tip time. "Still good two-way action, with 58 percent of bets on USC and 53 percent of handle on Oregon," PointsBet's Mike Korn said. The total bounced around a bit, from 138 to 139.5, then back to 138, and it's now 138.5, with 64 percent of bets/59 percent of money on the Over.

The Under is 5-1-1 in the Trojans' last seven games as a favorite. Find more NCAA betting trends for Oregon vs. USC.

Picks made on March 23

The USC Trojans entered the NCAA Tournament with March Madness odds of +3,500 to win the national title and, despite a pair of impressive wins, remain live long shots at +2,800. They are coming off an absolute beatdown over No. 3 seed Kansas, destroying the Jayhawks on offense and defense en route to an 85-51 victory.

USC is led by Pac-12 Player of the Year and Defensive Player of the Year Evan Mobley. The freshman center is averaging 16.5 points, 8.8 rebounds, and 3.0 blocks per game, and along with older brother Isaiah, gives the Trojans one of the tallest teams in the country. USC ranks 15th in the country in KenPom's adjusted offensive efficiency, while ranking fifth in defensive efficiency.

Oregon is fresh off an impressive victory of its own, running and gunning past the No. 2 seed Iowa Hawkeyes by a score of 95-80. The Ducks are 10th in the country in adjusted offensive efficiency and have all five starters averaging double-digits in points. However, they have trouble defending at the rim, ranking outside the Top 150 by allowing opponents to shoot 50 percent from inside the arc.

These teams met up last month with USC cruising to a comfortable 72-58 victory at home. And it wasn't like the Ducks' three-point attempts weren't dropping, it was inside the arc where they couldn't score, shooting just 40 percent from 2-point range. It's also interesting to note that Evan Mobley had an off night in that contest, with just 11 points, five rebounds, and zero blocks, while his brother sat out with a calf injury.

Although both of these schools are coming off huge victories over highly regarded squads, the Trojans dominated on both ends of the floor in their win while the Ducks only dominated on half of the court. Their small lineup was absolutely abused by Hawkeyes big man Luka Garza, who went 14 of 20 from the field for 36 points, and they could be in for another rough night against the Trojans' big men.

If USC could pull away for an easy win against Oregon when the Ducks outside shots were falling and – even with a rare poor night from Evan Mobley – we feel very comfortable backing them at this spot on neutral ground. Take the Trojans to cover this small spread.

The Ducks have a very efficient offense but despite a guard-dominated lineup they tend to play at a slower pace, ranking 227th in adjusted tempo. While they ran the floor against Iowa, we expect a slower slog against a conference rival that ranks even lower on the adjusted tempo totem pole.

Oregon shoots a sizzling 38 percent from beyond the arc, but its tallest starter is just 6-foot-6 and it had difficulty shooting over the Trojans trees down low in the previous meeting in February.

The Trojans have been monsters in the paint, ranking fifth in the country with 5.3 blocks per game and leading the nation in opponent 2-point field goal percentage at 41.6 percent. They've been even stingier in the NCAA tourney, holding Drake to 28.9 percent shooting from inside the arc and limiting Kansas to 32.4 percent.

While the Trojans are coming off a fantastic offensive performance where they scored 85 points against a defensively strong Jayhawks team, their outside shooting in that contest was an outlier. USC went 11 for 18 from beyond the arc in that contest (61 percent), but it averages a more modest 6.3 three-pointers per game on 34.7 percent shooting. Expect a bit of regression to set in for both offenses and back the Under.

The Ducks are coming off an incredible first half where they scorched the Hawkeyes for 56 points, but they also allowed a whopping 46 points themselves. Oregon ranks just 179th in the country in first-half scoring defense by surrendering 33.5 points per game.

Now the Ducks face a USC squad that has gotten much better guard play recently and has been jumping off to quick starts in the tournament, putting up 40 points in the first half against both Drake and Kansas. Take the Over on the Trojans team total for the first 20 minutes. 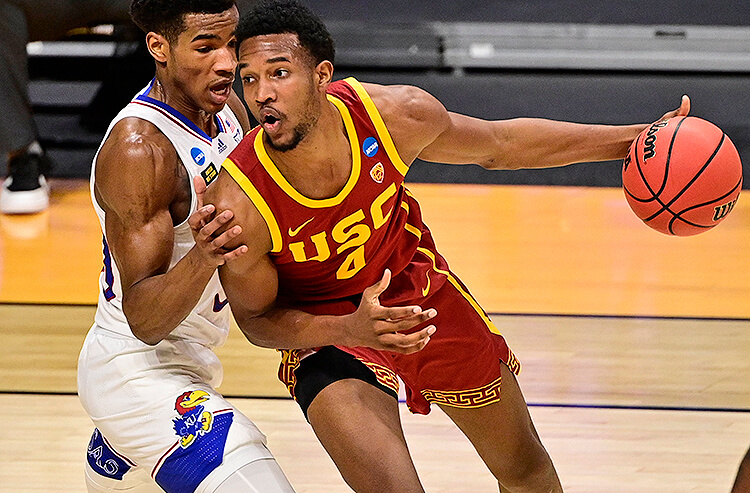 Oregon vs USC Sweet 16 Picks: USC's Size Too Much For Ducks
Provided by