With the National Championship just around the corner, the March Madness MOP odds board is now being led by Kansas' Ochai Agbaji (+120) with a couple of bracket-busting Tar Heels — Caleb Love and Armando Bacot — lingering behind him.

Emerging as the March Madness champ is a team effort, but pivotal to those title teams is the star that takes home the Most Outstanding Player award.

With the National Championship game only a few hours away, March Madness MVP odds continue to evolve, with the leader starring for the new team atop the March Madness odds: the Kansas Jayhawks.

Here is the latest look at the odds to win March Madness 2022 MVP with the National Champion set for action on April 4.

Ho-hum, another Big 12 title and No. 1 seed for the Kansas Jayhawks, who have two dynamite frontcourt players (in David McCormack and Jalen Wilson) and a dynamic veteran backcourt led by junior Christian Braun and senior star Ochai Agbaji.

Agbaji led the Jayhawks in scoring last year and has taken his game to another level this season, with a team-high 18.9 ppg (Braun is second at 14.2), while contributing 5.1 rpg. Agbaji is one of the premier shooters in the nation, converting 76.4% from the free-throw line, and hitting at a lethal 41.1% clip on 3-pointers.

Agbaji hadn't played his best basketball early in the NCAA Tournament but has played better as the games have gotten bigger. He scored a team-leading 18 points with five rebounds, four assists, and four steals in Kansas' Elite Eight win over Miami and followed it up with 21 points on just eight shots including 6-7 from beyond the arc.

He remains the best player on the team favored in Monday night's National Championship tilt, making him a logical choice as a +120 favorite.

Time and time again, it's been Caleb Love who has stepped up to the plate during North Carolina's run through the bracket.

His two best NCAA Tournament games have come in the Sweet 16 against UCLA (30 points, 11-24 shooting) and in last night's Final Four bout with Duke, where he posted 28 points and four rebounds on 11-20, including a flurry of clutch second-half buckets.

Should UNC cause another upset Monday night, it will likely be fueled by another big-time performance from Caleb Love, making him an interesting choice at +500.

Armando Bacot has been another key piece to UNC's bracket run and is available at +500 alongside his teammate.

The 6-foot-10 junior has dominated the boards, averaging 16.8 rebounds across the NCAA Tournament, including 22 in UNC's Elite Eight win over Saint Peter's and 21 more in last night's upset over Duke.

He's also provided the Tar Heels with a consistent scoring punch, reaching double digits in all five games, including 20 against Saint Peter's.

How is the March Madness MVP decided?

The honor of March Madness MVP is awarded by the Associated Press after the NCAA Tournament. Most often, the Most Outstanding Player comes from the NCAA championship team. There have been a dozen players named MVP that weren’t on championship teams.

History of the March Madness MVP

Not all Final Four MVPs go on to the pros, but they live on forever in NCAA Tournament glory — especially if you bet on their odds to win March Madness MVP. Tournament MVPs almost always come from the winning team. The last player to be named MVP whose team did not win was Hakeem Olajuwon for the Houston Cougars in 1983.

Most betting sites have offered odds on the tournament MVP for a few years now, but sportsbooks based in Nevada have only been allowed to book this March Madness prop since 2016.

American odds can be converted to decimal or fractional using our odds converter.

The Associated Press votes on the March Madness MVP after the National Championship Game.

Kansas' Ochai Agbaji is the solo betting favorite at +120. North Carolina's Caleb Love and Armando Bacot are both available at +500 ahead of Monday's National Championship game. 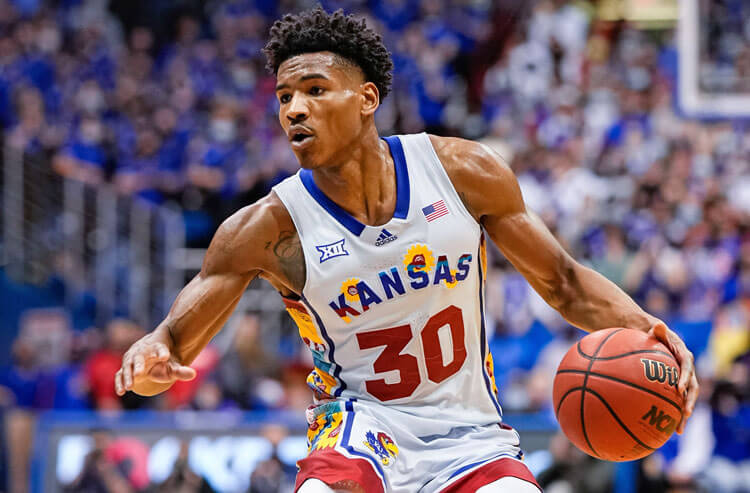