The New York Knicks are trying and that’s all Big Apple bettors can hope for, with the team covering in four straight games heading into Sunday’s Atlantic Division rivalry with the Toronto Raptors.

New York is a perfect 4-0 ATS in that span despite going 2-2 SU, but this is nothing new if you’ve been watching and wagering on the Knicks this season. The club is 31-21-1 against the NBA betting spreads but rolls into Sunday just under .500 at 26-27 SU.

Check out our free NBA picks and predictions for Raptors vs. Knicks on April 11.

The Knicks are 8-1 ATS in their last nine games as home favorites. Find more NBA betting trends for Raptors vs. Knicks.

The Raptors are playing the second stop of back-to-back games and their third game in four nights when they come to Madison Square Garden.

Toronto blew the doors off the Cleveland Cavaliers in the opening 12 minutes of Saturday’s game, jumping out to a 47-26 first-quarter lead and held a 33-point edge at the half, allowing coach Nick Nurse to spread out the minutes over an injury-depleted roster.

The good news for the Raptors is that, while Fred VanVleet and O.G. Anunoby (rest) are out Sunday, Kyle Lowry will return after missing six consecutive games and Pascal Siakam is back in the lineup return after getting a rest day in the win over the Cavs.

Toronto’s backcourt woes have thrown a wrench into one of the better transition attacks in the NBA. The Raptors, who ranked tops in the league in transition field goal attempts and fifth in effective field goal percentage in transition (61.7%) last season, are sitting third-worst in transition EFG (57.9%) in 2020-21.

The Knicks have been solid defending transition teams this year, limiting foes to an NBA-best 53.5 percent EFG in transition. New York has been forced to run small in recent games due to injuries to the frontcourt but that could work to its advantage versus the up-and-down tempo of Toronto.

New York continues to play to the level of its competition and hasn’t let bettors down in those rare spots giving the points. The Knicks are 13-6 ATS as favorites this season and 20-8 ATS in their last 28 games when pegged as the chalk.

Even with Nurse being able to lean on the bench due to Saturday night’s blowout in Cleveland, expect some wear and tear on traveling Toronto in this second of back-to-back games. The Knicks will impose their plodding pace on the offensive end, looking to siphon the gas out of the Raptors’ transition attack.

New York claims the slowest pace in the NBA at 96.5 which is complemented by an active defensive making opponents work for open looks. The Knicks get their heels above the 3-point line, limiting foes to just 33.8 percent success from distance (1st) and an average of 12 made triples per contest.

Toronto jacks up more than 40 looks from deep per outing but has watched those attempts temper in recent showings, with only 32 average 3-point shots over its last three games heading into Sunday. The Raps have made only 33 percent of those attempts in that span and will struggle to find open shots on the perimeter if they can’t beat N.Y. down the floor in transition.

When forced into a halfcourt set and made to move the ball, Toronto finds itself taking bad shots late in the shot clock. The Raptors made only 32.3 percent of 3-point attempts with 4-7 seconds remaining on the shot clock and that dips to 29 percent success with four or less remaining.

Second-year standout R.J. Barrett is on a tear, posting efforts of 20, 29, and 22 points in his last three games—playing above his season average of 17.6 points per contest.

The 6-foot-6 small forward is 24 for 40 from the floor in that three-game stretch, including a red-hot 12-for-16 clip from beyond the arc. Barrett is also making the most of his chances at the foul line, shooting 11 for 13 from the charity stripe in those three games and 82.4 percent overall from the line this month.

With a hot hand and plenty of motivation to make good versus the Raps, we like Barrett to top his point total of 17.5 on Sunday night.

Did you know that if you parlayed today’s NBA Raptors vs. Knicks picks, you could win $XX.XX on a $10 bet? 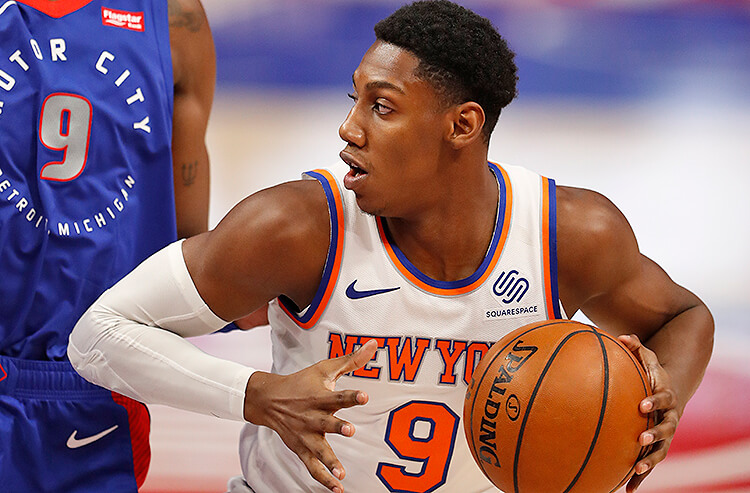