Switzerland vs Turkey Euro 2020 Tips and Predictions: Holes in Defense

Switzerland can take advantage of a poor Turkey team and give themselves a chance of progressing with a win in their final group stage game. Can Turkey take anything from the Euros? Check out our tips and predictions.

Group A will wrap up on Sunday, with Switzerland taking on Turkey in Baku, Azerbaijan.

Turkey is pointless through two games of the Euros and have looked like one of the worst sides in the tournament, while Switzerland sit on just a single point but could give themselves a chance of progressing with a win.

Keep reading for our Switzerland vs. Turkey tips and predictions for June 20.

It will be a sunny, hot day in Baku for Switzerland and Turkey's closing game of the group stage, with temperatures expected around 90 degrees Fahrenheit at kickoff.

Though Turkey was seen as a potential darkhorse ahead of the Euros, they have not even been competitive through two matches. First dispatched by a great Italian side, Turkey then followed it up by an equally toothless performance against Wales. The two consecutive defeats have left them to fight for scraps, and third place in Group A, against Switzerland.

While Switzerland were swatted aside by Italy with ease as well, they were considerably better against Wales. A 1-1 draw was a fair result, but the Swiss controlled the match and their xG of 1.98 is indicative of the chances they created through Breel Embolo up top. Switzerland are, traditionally, dependant on Xherdan Shaqiri in the final third, but Embolo has been their most dangerous player in the tournament.

Switzerland has lacked attacking intent for the majority of the tournament and may not see Shaqiri's best at all this summer, but they still have enough talent to break Turkey down. Turkey's back five has been completely out of sorts through two matches, and even the ever-steady Caglar Soyuncu was poor against Wales. With Switzerland desperate for a result to give themselves a chance and Turkey not showing any fight, this one is only going to go one way.

With Shaqiri struggling to impact games for Switzerland and stalwart striker Haris Seferovic having another steady, unflashy tournament leading the line, it has fallen on Embolo to create opportunities for Switzerland. He has done just that, finishing moves well — including the lone goal for his country so far — as well as creating chances by receiving the ball in dangerous areas and laying it off for teammates.

Switzerland will push forward in this one, with three points vital to their hopes of progressing. The movement of Wales absolutely killed Turkey in the second matchday, with the Dragons unlucky not to put more past a poor Turkey team. Embolo's movement is superb and, with Seferovic playing highest and Embolo given a more free role, he'll find plenty of space against Turkey.

Embolo can add to his goalscoring account at this year's Euros and help to give Switzerland all three points. 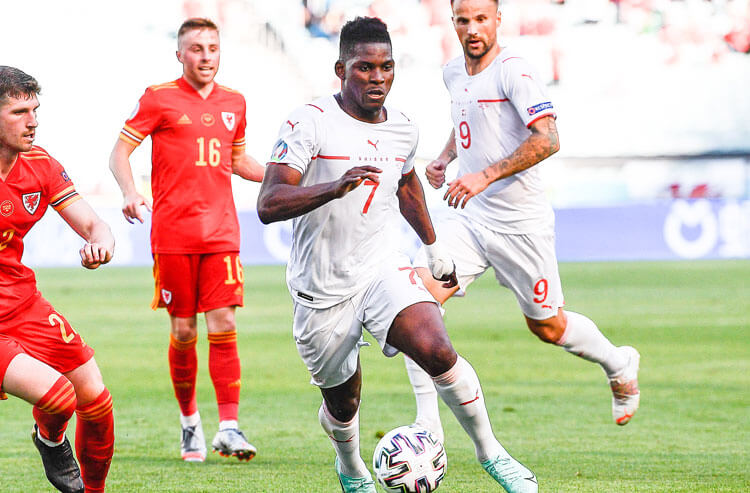 Switzerland vs Turkey Euro 2020 Tips and Predictions: Holes in Defense
Provided by