Italy vs Wales Euro 2020 Tips and Predictions: Azzurri Too Talented For Wales

Italy posted twin 3-0 wins in their first two Euro 2020 games but despite having a more offensive mindset, the Azzurri have still posted 10 straight clean sheets in international competition — and we don't see Wales snapping that streak.

Italy has looked like the top team at Euro 2020 but they will put their flawless record on the line Sunday as they wrap up Group A play in a match against Wales.

The Dragons came away with four points through their first two matches of group play but Euro 2020 betting lines opened with them installed as massive +750 underdogs against the Azzuri, with the draw at +310.

Here are our best free Italy vs. Wales tips and predictions for soccer action on June 20.

It's expected to be an absolute scorcher in Rome on Sunday with temperatures topping out at 90 degrees Fahrenheit.

Italy entered Euro 2020 at +800 to win the tournament and after a pair of terrific showings have seen their odds shift to +600, third-best on the Euro 2020 odds board.

Wales looked very sharp against Turkey on Wednesday, putting away the Crescent-Stars with a 2-0 score after a Connor Roberts goal in extra time.

That said, the Dragons came into this tourney with plenty of question marks, especially on the attack. While Wales looked clinical against Turkey they were very stagnant against the Swiss in their opening match and were fortunate to salvage a draw.

That's not a good sign as they take on an Italian side that has been practically unbeatable since Roberto Mancini took over as manager in 2018. The Azzurri won all eight of their games at Euro 2020 qualifying and have continued that excellent form with ten wins and three draws since qualifiers.

Not only is this Italian side extremely stingy when it comes to defending but they have been much braver on attack during the Mancini regime, with striker Ciro Immobile giving them a world-class finisher up front.

It isn't exactly a surprise which way we're going with our moneyline pick, with Italy absolutely dominating possession in throttling Turkey and Switzerland by identical 3-0 scores in their first two games of the tourney.

While it is possible that they'll come out a bit flat after a couple of cake walks, they will eventually ride the momentum of their home crowd in Rome and overwhelm the Welsh.

We don't want to take anything away from Italy's improved play on the attack as they have slotted six goals in the first two matches of the tourney, but they have a reputation for being a defensive powerhouse for a reason.

While this version of the Azzuri is less cautious with the ball, their ability to control possession and pin opposing teams in their own end has enhanced an already terrific defensive squad.

Italy has now posted an incredible ten straight clean sheets and hasn't conceded a goal in 965 minutes. Not only did they keep Switzerland and Turkey off the score sheet — they held them to a combined total of just one shot on target, making life easy for keeper Gianluigi Donnarumma.

They're bound to eventually let one by but with Wales deploying a conservative mindset and often finding goals hard to come by, we don't think it's going to happen on Sunday. Back the Azzuri to win and pick up the clean sheet at plus money. 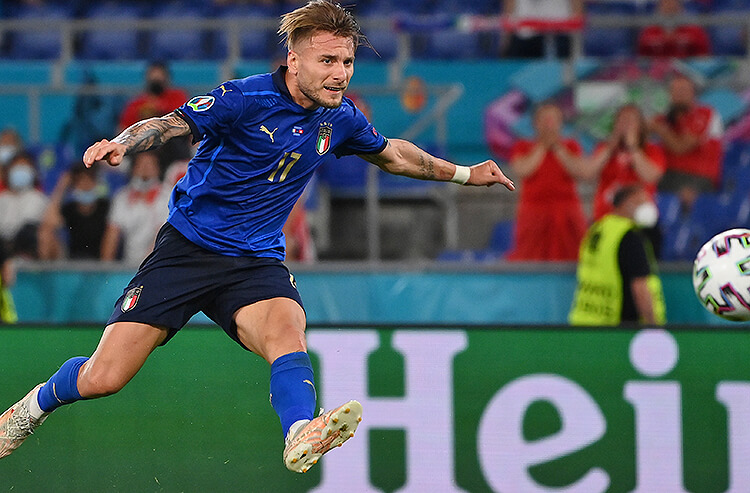 Italy vs Wales Euro 2020 Tips and Predictions: Azzurri Too Talented For Wales
Provided by