England vs Croatia Euro 2020 Tips and Predictions: Pride of the Lions

England and Croatia will begin Group D play on Sunday with a rematch of their semi-final in Russia three years ago. Can England get revenge at Wembley? Check out our tips and predictions for England vs. Croatia.

England's evolution since making the semi-final in Russia three years ago will get an early, symbolic test to begin the Euros. The Three Lions will face their biggest challengers in Group D, and the team that eliminated them in 2018, Croatia, at Wembley Stadium on Sunday.

Can England get by the test that stopped them at their last major tournament? Check out our tips and predictions for England vs. Croatia on June 13.

As of 1 a.m. ET Sunday, a few hours before the first Euro 2020 match of the day, England is a -165 favorite, Croatia is +500 and Draw +260 at BetMGM Nevada. The match opened England -120/Croatia +325/Draw +250. "Tickets are almost dead even, actually four more tickets on Croatia, and the money on both teams is almost dead even, too. Right now, we're a decent loser to Croatia and a small winner to England," BetMGM Nevada's Scott Shelton said. The total of 2.5 has a 2/1 ticket count and 4/1 money on the Over.

It will be a clear, sunny day in London with temperatures around 80 degrees Fahrenheit and no wind.

England has undergone plenty of change since their charmed run to the World Cup semi-final in 2018. While many key members of the squad remain, the Three Lions have spent the last three years playing on the front foot more consistently and evolving into a side capable of breaking down even the most well-drilled defensive systems. The emergence of players like Mason Mount, Phil Foden, and Jack Grealish have solved a midfield problem that culminated in England being completely overrun in the middle against Croatia in Russia, absent of answers.

While there's no questioning the lethal ability and depth of England's front line at the Euros, with one of the world's best strikers in Harry Kane flanked by Jadon Sancho or Raheem Sterling and Foden or Marcus Rashford, the ability of their backline has come into question repeatedly. However, in a match against an opponent at Croatia's level, we'll see England mitigate any possible defensive issues by playing with a five-man backline, and a midfield of Declan Rice and Mount.

England's setup on Sunday should aid their efforts to break down a Croatia side that remains as stout in defense, and talented in midfield, as they were three years ago. The two-man midfield will allow Kane plenty of space to drop deep and receive, with likely starters on the wing Foden and either Sancho or Rashford adept at getting in behind. Foden, in particular, could prove to be the difference for England this summer and ended the season in the Premier League as perhaps the country's most dangerous and in-form attacker.

Should Croatia hold England out for an extended period again, a player like Jack Grealish, too, gives them a different dynamic and is one of the best players in the world at advancing the ball into dangerous areas. The Aston Villa man ranks in the 97th percentile or above in shot-creating actions, progressive passes, and progressive carries among attackers in Europe. Though he isn't expected to start for England, he could deliver as a substitute.

England are one of the most talented attacking sides in the world, and their second or even third option off the bench could prove to be a match-winner. With an additional defender at the back against a Croatia team that plays just one striker, their defensive shortcomings won't be an issue.

Three years ago, England captain and No. 9 Harry Kane was awarded the golden boot for leading the World Cup in scoring. Since then, he has won his third Premier League golden boot (this season), scored 19 goals in 26 starts for England (including the decisive goal in England's only competitive match against Croatia since the World Cup), and another 76 goals at club level.

Kane is a serial goalscorer and in this England team, he'll have a similar dynamic to the one he has enjoyed at Tottenham with Son Heung-Min, dropping deep to receive the ball, playing it to an attacker making a forward run on the half-turn, before getting into goalscoring positions himself.

Kane is one of the world's best finishers in the prime of his career, and he is captaining an England squad with massive expectations. As he has for his club and country for years now, expect him to deliver on Sunday. 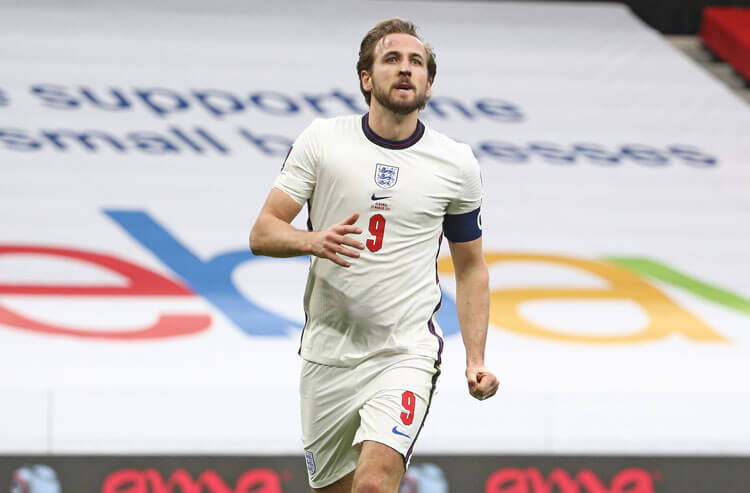 England vs Croatia Euro 2020 Tips and Predictions: Pride of the Lions
Provided by