Austria's best chance at a win in Group C will come in their opener against North Macedonia on Sunday. Will they need more than a goal to see victory? Check out our tips and predictions for Austria vs. North Macedonia.

Months after one of the most famous victories in their history, North Macedonia will make their Euro debut in Group C play against Austria.

The European soccer minnows' victory over Germany in WC qualifiers will have them believing anything is possible this summer, and they can ride that positive feeling into the easiest match they'll have in the group stage.

It's expected to be a rainy evening in Bucharest on Sunday, with a 76 percent chance of precipiation around kickoff and temperatures around 65 degrees Farenheint and 80 percent humidity.

As most smaller nations tend to do, North Macedonia is going to set up defensively, with a back five and another bank of four ahead of them. As they did in their shocking win over Germany, they will try to find success on the counter after their opposition has committed numbers forward. Luckily for North Macedonia, one of their primary outlets will be someone used to playing at 100 miles per hour.

Left wingback Ezgjan Alioski is coming off the best season of his career for Leeds United in the Premier League, performing as a vital part of one of England's most thrilling sides. Alioski and Enis Bardhi will be tasked with progressing the ball on the counter, with the eternal Goran Pandev up top and Eljif Elmas playing alongside him, but likely to drop into midfield when they are defending.

While North Macedonia will do a lot of sitting deep in this one and hope a rare counter presents an opportunity, Austria won't be overly threatening themselves, either. Lead striker Marko Arnautovic has put up modest numbers in China since leaving the Premier League, though he has performed better for the national team, with 0.68 goals per 90 minutes in Euro qualifying. Should Austria struggle to break North Macedonia's defense down, we could see towering striker Sasa Kalajdzic come in to give their attack a different dynamic. The 6-foot-7 forward is coming off the best season of his young career and is an aerial threat in the penalty area.

With Austria likely to dominate possession, it's why we look at Marcel Sabitzer, not David Alaba, as the key man. Alaba is the best player in Austria's history and just entering his prime, and could play any of three spots on the field for his country. But as the No. 10, it'll be on Sabitzer to unlock North Macedonia's low block. The RB Leipzig man is well-equipped to do so, as he ranks in the 94th percentile in assists, the 77th percentile in shot-creating actions, and the 93rd percentile in progressive passes among midfielders in Europe.

It may not go as smoothly as Austrian supporters will hope, but Sabitzer and company should be able to get through North Macedonia over 90 minutes.

There's a reason we are stressing Sabitzer's importance in this one, as well as the potential for the aerially dominant Sasa Kalajdzic to play the hero. It's because there's great potential for this match to be a bit of a slog throughout, before Austria begins to commit further numbers forward and play with urgency, as this is their best chance to gain three points in their group.

With Alioski leading the break for North Macedonia, the chance is there for a smash-and-grab result. However, the Red Bull roots of this Austria squad means there will be a lot of high press without the ball, which should negate the threat of a counter against a North Macedonia squad short on technical ability.

It may take Sabitzer, Alaba, and Austria's attack a while to finally break through North Macedonia's defensive line but when they do, they can breathe a sigh of relief as one goal will be enough. 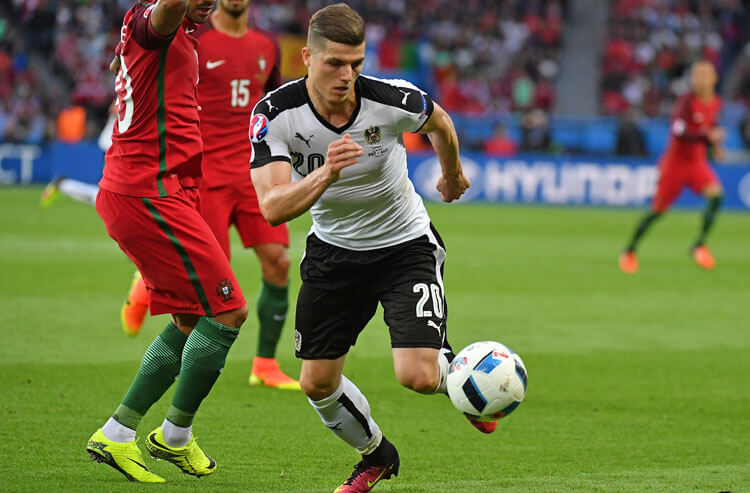 Austria vs North Macedonia Euro 2020 Tips and Predictions: Locked In Lynx
Provided by