Sweden have stormed through the women's soccer tournament at the 2020 Olympics, which started with a blowout of a once unbeatable USWNT. Can they finish it off with a gold medal over Canada? Check out our picks and predictions.

Medalists from the previous Olympics will look to improve upon their finish at the 2016 games, as reigning bronze medal winners Canada face former runners-up Sweden.

Canada took bronze at the previous two games but find themselves in their first gold medal game in Olympic soccer, while Sweden medaled for the first time in 2016. Adding to the drama is that Sweden sent Canada home from the previous World Cup, with a win in the quarterfinals in 2019.

Which of these two will take home their first gold medal? Check out our free Olympic soccer picks and predictions for Canada vs. Sweden on August 6.

This game was originally supposed to be played on Friday morning in Tokyo, but temperatures were expected to be scorching hot in the high-90s. As a result, both Sweden and Canada have requested the kickoff time be moved — and it was, to 9 p.m. Friday night (local time), where it is expected to be in the low-80s  and (most importantly) not in direct sunlight.

Somehow, Canada's women's team have reached their first gold medal game. The Canadians navigated their group without a loss, miraculously got by Brazil on penalties, despite the legendary Christine Sinclair missing the first penalty, then finally got over the hump in a win over their rivals the USA in the semifinals.

While Canada's resilience in the knockout stages is well worth noting, they have continued along as they did in the group stage. The three-game round robin saw Canada win one, against Chile, but draw the other two as they advanced with just a +1 goal differential. Through the quarter and semifinals, it has again been just a single goal that has separated them from their opposition.

Sweden, meanwhile, began the tournament with a statement of intent and haven't looked back. A stunning, dominant 3-0 win over the dynastic U.S. women's team began group play and ended the States' unbeaten run of over 30 games. They displayed some resilience of their own in coming from behind against Australia and one of the best players alive, Sam Kerr, in what ended up as a 4-2 victory. They dispatched hosts Japan with little issue in the quarterfinals, before a second win over Australia sent them back to the gold medal game.

Since the first whistle, Sweden have been the best team at the tournament, undefeated whilst conceding only three times and scoring the second-most. Both teams in the gold medal game will improve upon their 2016 finish but, unfortunately for Canada, that means going home with silver.

Canada's strength in this tournament has been their defense, as center-back Kadeisha Buchanan has continued to be one of the country's best players, while goalkeeper Stephanie Labbe has been excellent — and made two stops in the penalty shootout heroics against the USA.

Getting through on penalties in the quarters and holding the U.S. out in the semis, Canada have not conceded since the closing moments of the group stage and they hold a 1-4 O/U record on a 2.5 total. Stina Blackstenius and the Swedish attack have been phenomenal at this tournament, but they will find it difficult against the Canadian backline.

Not to be outdone, Sweden have three clean sheets in five games, and have rarely been tested even against Australia and the outstanding Kerr in the semifinals. While they are 3-2 O/U in the tournament, all three Overs were hit on Sweden's goal-scoring total alone.

Another factor to consider here is the weather. Canada and Sweden have submitted a joint request to have their start time moved, as it is currently set to be played in extremely heavy heat and humidity. Should the kickoff remain as is (11 a.m. local time) the weather will bog down play and both attacks will suffer. 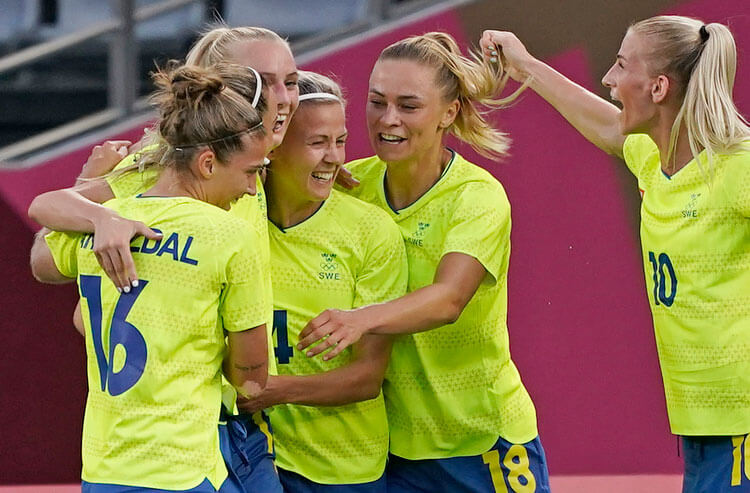 Canada vs Sweden Olympic Soccer Tips and Predictions: Can Sweden Complete a Perfect Tournament?
Provided by