The United States is once again the favorite to bring home the most overall medals and most gold medals from the Summer Olympics... but China is making things interesting.

The Olympics opened on July 23, and Olympic betting markets are front and center right now — with the most common market being Olympic medal odds for each nation.

The U.S. is the heavy favorite to capture the most golds and total medals... but China has closed the gap and made it interesting on the odds board.

Another thing to know is that there will be an additional 33 medal events in Tokyo than in 2016. The 2020 Summer Olympics will have 339 events in 33 sports.

We previously said that if you’re not betting on the United States to capture the most gold medals, you're a brave person.

But things are extremely tight, as the Americans had the lowest Olympic medal odds at -550 to win the most golds... but are now tied at the top with China at -120.

Since 1996, the U.S. has captured the most gold medals in five of the last six Olympic competitions. Followed the U.S.A. and China are Japan (+8,000), then the Russian Olympic Committee, Great Britain, and Australia at +25,000.

FanDuel: Get $1 bonus in site credit for each gold medal the USA wins. Claim Now.

PowerPlay: Get $5 and 10 Free Spins for every Canadian Medal! Claim Now.

Odds for most medals overall

You won’t find much difference in the odds between the most golds and total medals. The U.S. is the clear favorite, although they went from -5,000 on July 30 to -700 right now — which is still an implied 87.50 percent probability. The Americans have finished with the most medals for six straight Olympics and are set up to accomplish the feat for a seventh straight event.

The remaining Top-9 countries are nearly identical to the gold medal total odds, with China the only threat to the  U.S. at +400, followed (albeit wayyyyy behind) by the Russian Olympic Committee (+4,000) and then Japan, Great Britain, and Australia at +25,000.

The United States' dominance in the Summer Olympics should continue in 2021. America’s total medals line sits at a robust 110.5 medals, with the Over/Under set on the total gold medals opening at 42.5. There aren’t many events where the Americans won’t be competitive.

On the men’s side, 100m-sprinter Trayvon Bromell is a big favorite to capture gold at -110. All four of the men’s golfers are ranked in the Top 5 in the world. The basketball team, led by Kevin Durant and James Harden, will look for their fourth straight gold. The baseball team announced its roster on July 1 and should be considered a favorite in the tournament. Swimmer Caeleb Dresel is a threat to win seven medals in the pool. Nyjah Huston is the favorite to win the men’s street skateboarding event at +125, and sprinter Noah Lyles has a shot at sweeping the board in the men’s 100m, 200m, and 4x100m.

Star gymnast Simone Biles leads the women’s side. Biles has the chance to win five gold medals in Tokyo, becoming the only American to accomplish the feat. The women’s softball team is a heavy -163 favorite to capture gold. Katie Ledecky is a threat for five golds in the pool, and four-time world champion Carissa Moore will look to take home the first Olympic gold medal in surfing.

Canada has finished 20th or higher in five of the last six Olympics and hasn’t won more than four gold medals since 1992 in Barcelona. Canada opened at +100,000 to capture the most medals in Tokyo, meaning a $100 bet would net backers $100,000 but at 0.1 percent implied probability, it’s as long a shot as they come.

Tokyo is projected to be a better result for the Canucks as their gold medal total is set at 4.5 and paying -155 for the Over. Their total medals line is set at a sharp 19.5.

Kylie Masse is a favorite to reach the podium in swimming. The 23-year-old hasn't lost a 100m backstroke competition since winning the bronze medal in Rio. Many of Canada’s possible gold medals could come in the pool with a strong team of men and women, including Sydney Pickrem, Taylor Ruck, Maggie MacNeil, and Penny Oleksiak.

Rossie Maclean has back-to-back Olympic golds on the trampoline and will be looking for her third straight. Street skateboarder Annie Guglia is a gold-medal hopeful. Claudia Holzner and Jacqueline Simoneau currently have the sixth-best odds to win the women’s duets artistic swimming gold at +6,600. Sprinter Aaron Brown is a long shot in the men’s 100m at +8,000. At the same time, 19-year-old tennis star Felix Auger-Aliassime could surprise some in the men’s tennis competition after breaking nearly every age record since he qualified for an event on the ATP Challenger Tour as a 14-year old.

Great Britain has the fourth-highest odds to capture the most medals (+5,000) and fifth in the odds for the most gold medals (+10,000). With neither of those markets having a great probability of cashing, bettors can bet Over/Under on a set total. Great Britain’s golds total can be found at 14.5 while the total medals Over/Under is set at 41.5 and trending upwards.

Those totals look good to Over bettors as Great Britain has topped both those totals for three straight Summer Olympics. 2016’s 67 medals in Rio were the most Great Britain has won as it finished with the second-most total medals. However, the Brits are expected to have a lower medal total as 2016’s success was heavily reliant on track cycling, artistic gymnastics, and rowing. The 2020 delegation is projected to be weaker in these events than in 2016.

Great Britain is expected to win gold in several rowing events, including the men’s coxless four rowing, men’s eight rowing, and women’s lightweight double skulls. Not to be forgotten is cycling’s golden couple, Laura and Jason Kenny. The pair took home five gold medals in Rio, and each has a chance to become Great Britain’s most decorated Olympians ever.

Dina Asher-Smith will be competing in the women’s 100m, 200m, and 4x100m. Last year, Asher-Smith won three world championship medals, including a gold in the 200m. 12-year-old Sky Brown (skateboarding) will also represent the nation and will be the youngest Brit ever to compete in the Olympics.

How to bet on the Olympic medal odds

Now you know betting odds for Olympics medals, and it's time to bet. Let us guide you through how to bet on the Olympics with some basics on reading odds and tips for making smarter Olympic bets.

Where to bet on the Olympic medal totals

Who is the favorite to win the most medals at the Tokyo Olympics?

Team USA is set to dominate in Tokyo as it comes into the Summer Olympics as -900 favorites to capture the most total medals.

Who is the favorite to win the most gold medals at the Tokyo Olympics?

The Americans are a massive favorite to win the most gold medals at the 2020 Summer Olympics with a hefty price tag of -700 to capture the most golds.

Who won the most medals at the 2016 Olympics?

The USA left Brazil with a total of 121 medals in 2016 which was 54 more medals than the next nation. The Americans tend to dominate the Summer Olympics.

Who won the most gold medals at the 2016 Olympics?

To no one's surprise, the USA won the most gold medals in Rio at the 2016 Summer Olympics with 46 in total. The next highest nation was Great Britain with 27. 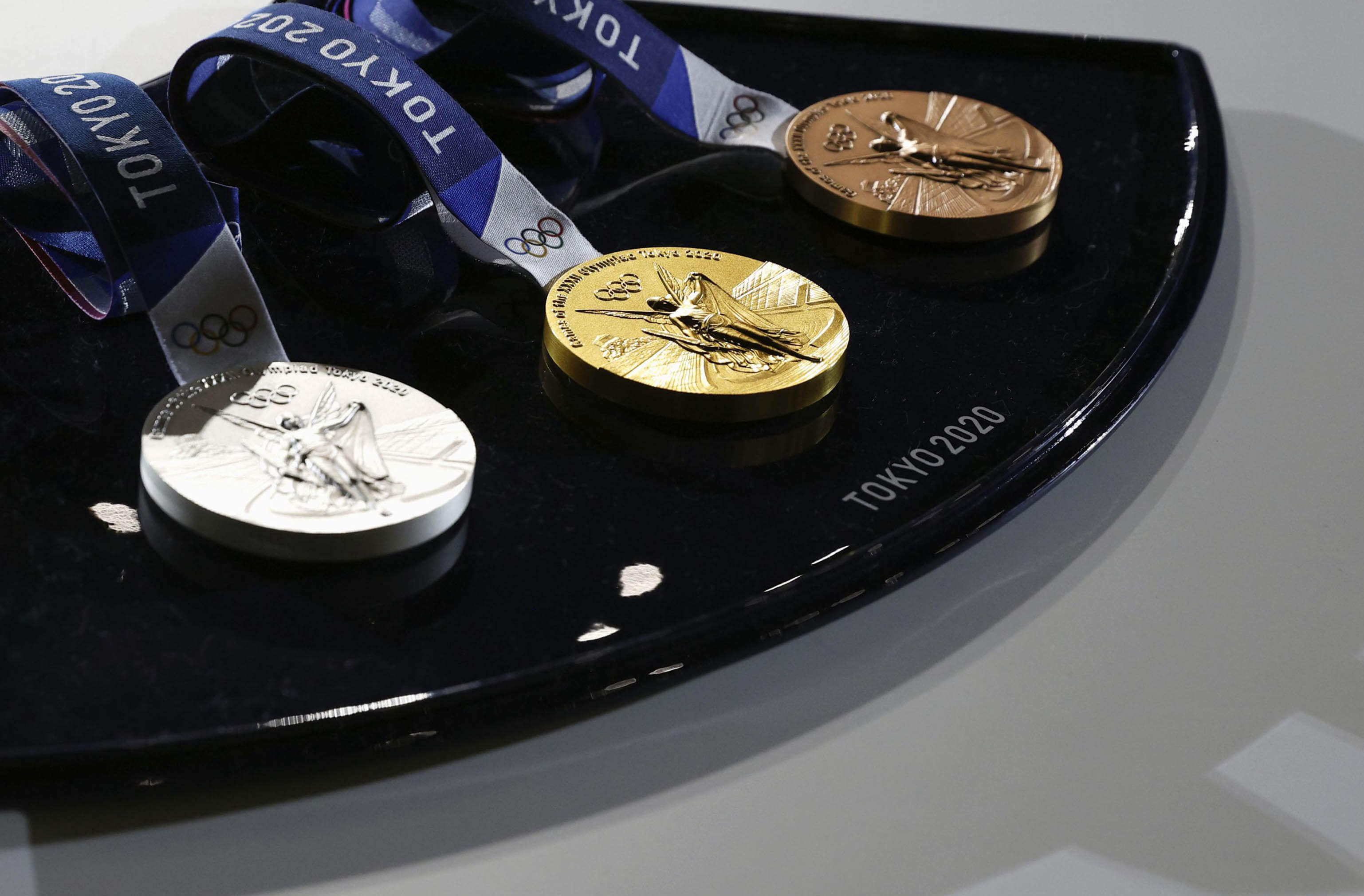