Olympic hockey odds are on the board for Beijing 2022, where NHL players will be allowed to participate once again. That's good news for Canada, who is the odds-on favorite to claim gold for the third time in the last four NHL-driven tournaments.

After some back-and-forth on if they would participate or not, the 2022 Beijing Olympics will feature NHL players for the men's hockey tournament — which is fantastic news for both Olympics bettors and hockey fans alike.

The decision to allow the best hockey players in the world obviously means Canada gets a leg up in the hockey futures board, but many of the other traditional powerhouse hockey nations are right up there with the Canucks.

With the NHL season just weeks away, and the Olympic tournament still months off from puck drop, here are the early Olympic hockey odds for the upcoming 2022 Olympics.

Canada finished a disappointing third in the 2018 Olympics in South Korea, but that needs to come with an asterisk as NHL players were not permitted in that event. In Olympic events with NHL players, Canada has claimed gold in three of the last four tournaments — and is the odds-on favorite once again with the top players in the world competing.

Odds via Sports Interaction as of September 28, 2021

Canada the odds-on favorite for gold

Here's the thing about Canada and hockey — there's no shortage of available talent and no other country in the world can match its depth.

While the roster hasn't officially been announced yet — as regular-season performance and potential injuries can cause changes — Team Canada's roster is almost assuredly going to feature the two best players currently in the world in Connor McDavid and Nathan MacKinnon, one of the greatest players ever in Sidney Crosby, plus superstars in Brad Marchand, Patrice Bergeron, Brayden Point, and John Tavares... as depth players.

All the talk goes to Canada's forwards, but it's the blue line where the Canucks generally outshine the competition. Led by Golden Knights teammates Shea Theodore and Alex Pietrangelo, Canada's defensive corps will likely also feature budding megastar Cale Makar, plus dynamic talents in Dougie Hamilton and Morgan Reilly — with high-profile veterans like Drew Doughty, Aaron Ekblad, and Brent Burns in the mix as well.

The goaltending situation is the only true question mark for Canada. If Carey Price is healthy and on the top of his game, he's the unquestioned No. 1... but if he's off, then it's likely veteran Marc-Andre Fleury, or less-proven talents in Jordan Binnington, Jake Allen, Mackenzie Blackwood, or Carter Hart getting the call — a steep dropoff.

Regardless, Canada has an embarrassment of riches and even with some tough decisions to make, is well justified as the clear-cut favorite to claim gold again.

Don't look now, but the Americans might almost have a roster to make that of their North American neighbors — and are second on the odds board at +350.

Team USA has top-end talent in Auston Matthews, Patrick Kane, and (if healthy) Jack Eichel, with solid depth scoring in J.T. Miller, Kyle Connor, international hero T.J. Oshie and the brothers Tkachuk (Matthew and Brady). But what has US backers salivating is the talent and depth on the blue line.

Also giving the Americans a slight edge over Canada (right now) is the stability in goal — 2019-20 Vezina Trophy winner Connor Hellebuyck is the clear No. 1 for this team and is in the prime of his career, with Helle likely being backed up by another standout No. 1 (John Gibson), and possibly adding a rising young goalie such as Spencer Knight, Thatcher Demko, Cal Peterson or Jake Oettinger into the mix to give them some Olympic seasoning.

The US hasn't medaled since 2010 and hasn't claimed gold since the Miracle on Ice in 1980 — but this is undoubtedly the American's best chance to end one (or both) of those droughts.

Where can I bet on Olympic hockey? 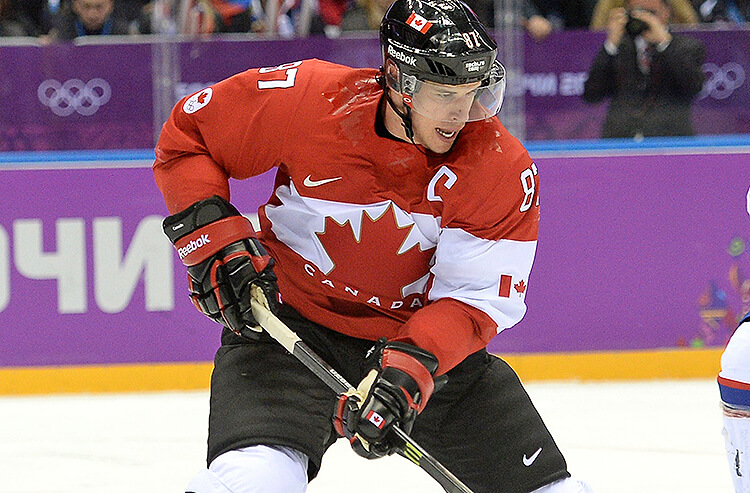