Thanksgiving Day marks a pivotal matchup in the NFC East when the Dallas Cowboys play their annual holiday home game against the rival Washington Football Team this Thursday.

The Cowboys snuffed out a four-game losing skid with a victory in Minnesota in Week 11 and opened as 3-point favorites for this Week 12 contest. Early action on Washington has bumped that spread below the key number to -2.5, with the Football Team coming off a 20-9 home win versus Cincinnati on Sunday.

Dig into our NFL free picks and prediction for Washington vs. Cowboys on November 26.

Weather won't be a factor at indoor AT&T Stadium. Be sure to monitor the gametime conditions for other matchups with our NFL weather info.

Washington and Dallas have played Over in eight of their last 10 meetings. Find more NFL betting trends for Washington vs. Cowboys.

These divisional foes played just a month ago, with Washington smashing Dallas 25-3 in the Cowboys’ second game without injured quarterback Dak Prescott.

Backup QB Andy Dalton went down with a concussion in that Week 7 matchup, but made his return under center this past Sunday, throwing for 203 yards and three touchdowns in a 31-28 win at Minnesota. It was the first time since Prescott was hurt that Dallas had scored more than 19 points, and that effort gives Cowboys backers some hope heading into this short week.

There are plenty of weapons around Dalton, who found nine different targets including WR Amari Cooper. The star wideout reeled in six balls for 81 yards and has remained a threat despite the game of musical chairs under center for the Cowboys in recent weeks. Complementing that aerial attack was a return to form for RB Ezekiel Elliott, who posted his first 100-yard rushing day of the season.

That suddenly-deep Dallas offense runs into one of the stingiest and hardest-hitting defenses in the league in Week 12. Washington tops the NFL in passing defense and has recorded 32 sacks on the year – tied for third-most in the league. The Football Team piled up six sacks in their Week 7 win over the Cowboys and had four sacks versus the Bengals this past Sunday.

Dallas rolled out a new-look offensive line in Minnesota, shifting Pro Bowl right guard Zack Martin to right tackle in hopes of plugging the leaks in this injury-riddled protection. It appears to have worked, as Dalton was sacked only once and knocked down just twice by the Vikings. With Elliot regaining his footing in the ground game, the Cowboys can keep the WFT pass rush honest and pick up a crucial win in this disaster of a division.

This total opened at 48 points and has since sunk like a stone to as low as 46, which is what you’d expect for a game helmed by Alex Smith and Andy Dalton. What is this, 2013?

One week of solid offense from Dallas may not be enough for most bettors to bank on, especially against this Washington defense, but it feels like something is brewing in Big D. Dalton was given time to make plays in Week 11, or more accurately, allow his talented receiving corps to make plays. On top of Cooper’s efforts, rookie WR Ceedee Lamb caught four balls for 34 yards, including one of the best TD catches you’ll ever see, and TE Dalton Schultz continues to emerge as a viable target.

But for all those positives on offense, it’s the Cowboys defense that will drive up the score on Thursday. This secondary continues to look lost and has allowed opposing passers to boast an average rating of 106.6 on the year, giving up a league-high 24 passing touchdowns with only three interceptions.

The Football Team isn’t an offensive juggernaut by any means but has posted an average of more than 23 points per game in the past four contests. Alex Smith continues to work his way back into form under center and has a deep-strike WR in Terry McLaurin, who should feast on this soft Dallas secondary.

And speaking of “Scary” Terry, the Washington wideout burned the Cowboys for 90 yards and a touchdown in Week 7, including a 52-yard TD strike in the second quarter.

McLaurin had just five catches and 84 yards versus the Bengals in Week 11 but has snagged seven balls in each of the past four outings, totaling 374 receiving yards in that span. He’s fourth in the NFL in receiving yards and second in yards after the catch behind Saints RB Alvin Kamara.

Dallas is a terrible tackling team to begin with and has allowed 33 passing plays of 20 or more yards on the season.

Did you know that if you parlayed this week’s NFL Washington vs. Cowboys picks, you could win $56.82 on a $10 bet? 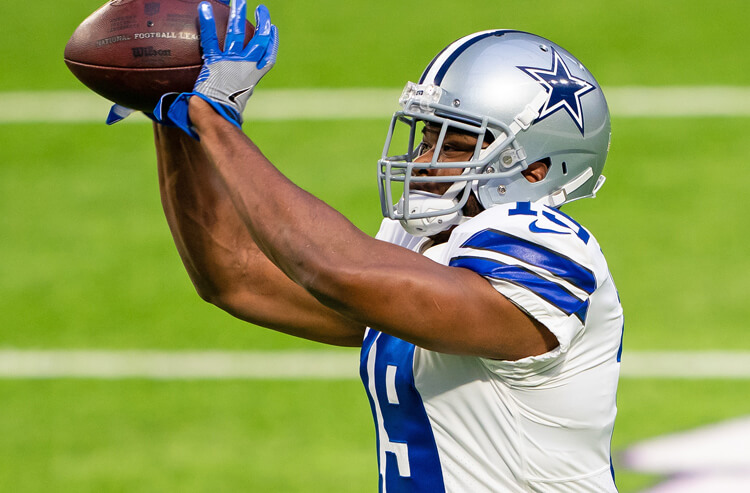