It's never too early to look ahead in the NFL, but while the focus is on who will win the Super Bowl (or even what teams will win each conference), we're going to look at NFL Playoffs odds.

Why? Because, well, you can't win the Super Bowl without making the playoffs—baby steps, right?

As we cruise into the back half of the NFL betting season, there have already been some pleasant surprises – and major disappointments – and with the ebbs and flows of the season each team's chances of making the postseason are constantly in flux.

Here are the current odds for each team to make the NFL Playoffs heading into Week 11 action. How the odds work is very simple: "Yes" means that they advance to the NFL Playoffs (as a division champion or a wild card), while "No" means they miss the postseason...so better luck next year.

It's been a stark contrast between the start of Tennessee's season, in which it went 5-0 and topped 31 points in four of those games, and the 1-3 stretch the Titans are mired in now, including a loss to the Bengals and a Thursday Night Football blowout loss at home to the Colts last week.

While the biggest culprit behind the Titans' struggles is their defense, which allows the eighth-most yards per game, the offense has slowed down quite a bit as well, scoring just 21.25 points over their last four games, compared to 37 ppg in the four contests prior.

So why are we buying a team trending downwards that is still at -205 to make the playoffs? Well, the Titans do already have six wins in their pocket and their remaining schedule features games against the Jaguars, Texans and Lions, as well as the Browns and a rematch against Indy. Those are all winnable games, and with the Titans also entering that time of year when RB Derrick Henry kicks it into high gear, they should still be able to cobble together enough wins to sneak into the expanded playoffs.

Tennessee also faces a banged-up Baltimore squad in Week 11—if the Titans win that game, their value will be gone, but if they lose this week, you could get even more value on a team that, as mentioned above, does have a favorable schedule down the stretch.

Just like we rode the Chicago Bears week in and week out until their "No" odds were no longer plus money, we're going to stick with buying the Vikings until we bleed every last drop of value dry.

Vikings' superstar RB Dalvin Cook wasn't a superhero last week, rushing for just 96 yards on 30 carries, but the Vikes were able to get past the aforementioned Bears on Monday Night Football, moving up to 4-5 and pulling within two games of a playoff spot.

Despite missing a game and a half, and already having his bye week, Cook leads the NFL with 954 rushing yards and 12 rushing TDs. The Vikings defense is improving – going from 32 ppg allowed over their first six games to 18.3 points against over their last three wins – and their next three games are against Dallas (2-7), Carolina (3-7) and Jacksonville (1-8), teams that are a combined 6-22 this season and sit 31st, 20th and 25th in the NFL in rush defense.

The Vikings were +960 to make the playoffs three weeks ago, they were +430 two weeks ago and they're currently now at +160. How much longer will this team stay available at plus money?

I don't think it will be very long, so jump on them now.

The Eagles were finally healthy, getting back WR Alshon Jeffery, TE Dallas Goedert, RB Miles Sanders plus some offensive linemen. Taking on a terrible New York Giants team it just beat two weeks ago, Philadelphia was set to notch its third straight win and take a stranglehold on the NFC Least lead.

The Eagles dropped an incredible stinker, committing 11 penalties and failing to convert a single third down in a 27-17 performance.

When trying to figure out where the Eagles' problems lie, it's becoming more and more apparent that the microscope has to go on quarterback Carson Wentz. The former second-overall pick is completing just 58.2 percent of his passes and has just 12 touchdowns this season—against 12 interceptions. Simply put, he needs to be much better for the Eagles.

The sad thing is that even if Wentz continues to struggle, the Eagles still sit in first place in the NFC East and are in the driver's seat to make the playoffs. But their next five games are against the Browns, Seahawks, Packers, Saints and Cardinals: we could easily see them sitting at 3-10-1, so we're going to take this plus money while it's still available.

We'll admit: the Rams beating up the Seahawks last week definitely caught us by surprise, but that doesn't change our perception of the Rams: A very good defense, a not very good quarterback and a record that could still plummet quickly.

Los Angeles granted Tua Tagovailoa his first NFL win in Week 8, despite limiting Miami to just 145 yards of total offense. But that's what happens when you have four turnovers (including a fumble return touchdown), allow a punt return touchdown and you have QB Jared Goff throw 61 times—you lose.

The Rams only threw 37 times in last week's win against Seattle, but Goff did not throw a touchdown and the defense forced three turnovers. Even though he does have 13 TD passes this season, Goff also has six interceptions and three lost fumbles. The Rams are better when relying on a run game that is eighth in the league in rushing yards per contest, when Goff can work off of play-action to take shots downfield.

Los Angeles is 6-3, but its remaining schedule includes a game against the Buccaneers, a rematch at Seattle and two dates with the Cardinals.

That tough schedule, coupled with surging Minnesota's easier slate, has us thinking twice about the Rams making the playoffs. And with juicy +330 odds for them to miss out on the postseason, we simply cannot say no.

The NFL Playoffs expanded for the 2020 season. While there traditionally were only 12 teams that made the playoffs, this year will see 14 in the postseason — seven from each Conference.

In each conference, the division winners will comprise the Nos. 1-4 spots, while the Nos. 5-7 spots will come via wild cards. The top seed in both the AFC and the NFC will get a first-round bye, with the other matchups proceeding as follows:

After the first round, the No. 1 seed will face the lowest remaining seed in their conference, while the other two teams will square off. Those winners will meet in the conference championship, and then the winners of those games — the AFC and NFC champions — will meet in Super Bowl LV on February 7, 2021 at Raymond James Stadium in Tampa Bay.

Where Can I Bet On Odds To Make The NFL Playoffs?

Many online books and casinos offer bets on football odds and props. In the USA, DraftKings, FanDuel and PointsBet are popular sites to bet on the NFL playoffs. In Canada, Sports Interaction, bet365 and Pinnacle are our favorite sportsbooks for NFL Playoffs odds. Check out the best sportsbooks available where you live to find NFL playoffs odds. 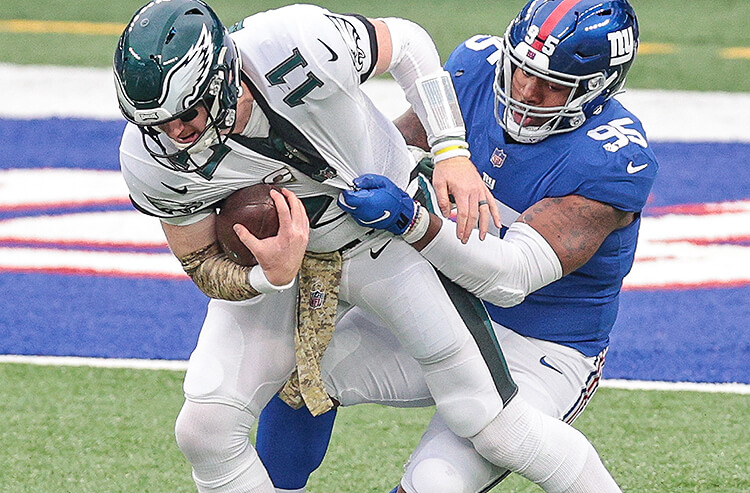 Ravens vs Steelers Week 12 Thanksgiving Picks, Predictions
Get the best sports betting information delivered straight to your inbox for free.
By signing up for the Covers newsletter, you agree to receive electronic communications from Covers about our products and services, as well as other content that may be of interest to you
About Us
Contact Us
Careers
Our Team
Our Community