The Detroit Lions host their annual Thanksgiving Day matchup, this time welcoming the Houston Texans to the table in Week 12.

The Lions opened as 2.5-point home underdogs for Thanksgiving, coming off a 20-0 shutout loss to the Carolina Panthers. Houston, on the other hand, picked up its second win in the last three games with a strong performance against the Patriots in Week 11.

These are our NFL free picks and predictions for Texans vs. Lions on November 26.

This game will be played indoors at Ford Field. Be sure to monitor the gametime conditions for other Week 12 games with our NFL weather info.

The Lions have coverer the spread just six times in their last 20 games. Find more NFL betting trends for Texans vs. Lions.

This spread is dangling below a field goal and will likely move to Houston -3 by kickoff on Turkey Day. The short week doesn’t leave much time to mend for either team, but it could be extra costly for Detroit.

Quarterback Matthew Stafford played through a thumb injury on his throwing hand in Week 11’s loss to the Panthers—and it showed. He completed only 18 of 33 passes for 178 yards and failed to throw a touchdown pass for the first time since Week 10 of 2019.

It also didn’t help that offensive standouts RB D'Andre Swift, WR Kenny Golladay and WR Danny Amendola were out with injuries. Their statuses for Thanksgiving are still up in the air and there’s not much time to get them back on the field.

Texans QB Deshaun Watson has been phenomenal the past two months and held on to the hot hand in Week 11. He finished with 344 yards and two TDs in the win over New England (along with 36 yards rushing and a TD on the ground) and now takes on a disciple of the Bill Belichick defense he just torched in Detroit head coach Matt Patricia.

The Texans are better than their record would indicate, having played plenty of playoff-bound opponents to start the season, and they have some momentum heading into this short week, which works in their favor. Get Houston below the field goal while you can.

Watson hit nine different targets against the Patriots, however, Houston’s passing attack could be missing a couple of pieces for Thanksgiving, with WR Randall Cobb expected to miss time with a toe injury and fellow wideout Kenny Stills questionable as he nurses an ailing quad.

Given the shaky state of the Lions’ passing game, the rushing attack is the best solution versus this Houston defense—a ground game that may still be without Swift (concussion). The Texans allow 5.1 yards per carry to opposing runners and even though Detroit mustered just 40 yards on the ground versus Carolina, it handed off only 17 times and had to abandon the run after falling behind.

While Houston may allow those shorter gains on the ground (which keep the clock ticking), it did look much stronger defending the pass against the Patriots. J.J. Watt batted down four throws and the team had two sacks and eight hits on the QB. The Detroit offensive line allowed Stafford to get sacked five times on Sunday and have allowed 13 sacks in the past four games.

Houston’s defense has been under fire most of the year, but it does stiffen up inside the red zone, allowing opponents to score a touchdown in just half of their tries over the past three games and on 60 percent of those chances for the entire season. The Lions have been rotten in the red zone in their last three outings, finding paydirt less than 43 percent of the time.

The Texans rank dead last in rushing defense and have allowed opposing running backs to march for more than 1,400 yards and 12 touchdowns this season.

Detroit is waiting on the concussion protocols for standout rookie Swift, who missed Week 11, and could once again be left handing off to veterans Adrian Peterson and Kerryon Johnson, the latter of which had six carries and caught two of five targets for a combined 38 yards last Sunday.

That versatility on the ground and through the air – and the instability of the depth chart – make Johnson a tempting prop play to score a touchdown on Thursday. Take a bite of this plus-money payout. 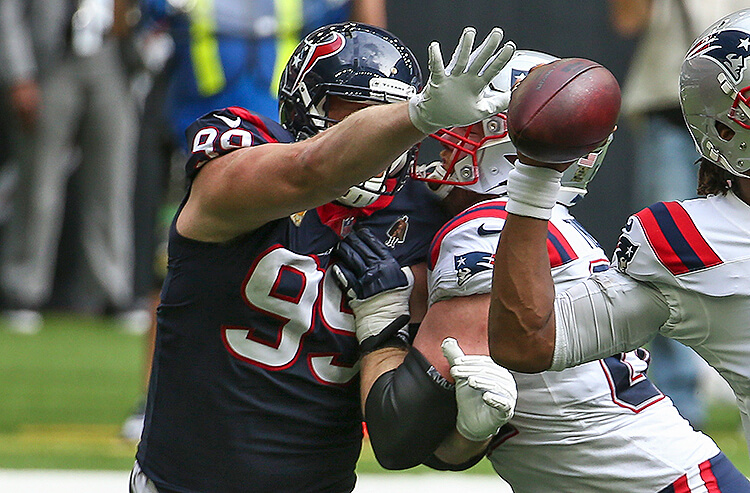 Texans vs Lions Week 12 Thanksgiving picks and predictions
Provided by