Ben Roethlisberger's return to action may not be enough to save the Pittsburgh Steelers on Sunday night against Los Angeles as they're still missing key pieces on D. See if the Bolts can get the job done at home in our SNF picks for Steelers vs. Chargers. 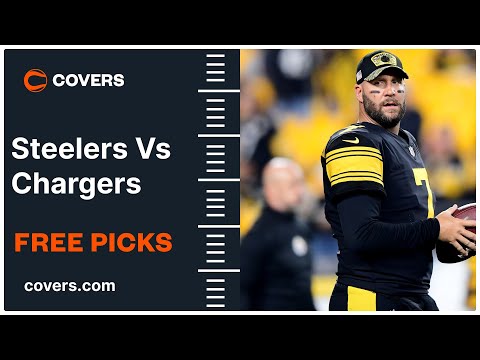 A coast-to-coast battle headlines Sunday Night Football in Week 11 when the Pittsburgh Steelers cross the country to take on the Los Angeles Chargers.

The NFL betting odds have L.A. as 5.5-point home chalk at time of writing with Pittsburgh quarterback Ben Roethlisberger being activated in order to return from COVID-19 protocols after missing last Sunday’s tie game with Detroit. The Chargers are in dire need of a course correction with only one win in their last four contests.

Check out our free NFL picks and predictions for Steelers at Chargers on November 21.

Los Angeles opened as low as -4 and quickly moved to 6-point home chalk before settling in at -5.5 most of the week. This line jumped to as high as -6.5 on Friday but has since come back below the key number with Roethlisberger cleared to play. The total opened at 47 points, dipped as low as 46.5 before coming back up to 47.5. Use the live odds widget above to track any future line movements right up until kickoff and be sure to check out the full NFL odds before placing your bets.

The Chargers are 6-2 ATS in their last eight vs. AFC teams. Find more NFL betting trends for Steelers vs. Chargers.

Steelers vs Chargers picks and predictions

Chargers QB Justin Herbert is searching for consistency after a roller coaster ride in each of the past four games. Herbert appeared to snap a two-game funk with an impressive road win at Philadelphia in Week 9 but stubbed his toe again last Sunday, throwing for just 195 yards on 59 percent completions in a loss at Minnesota.

Pittsburgh usually isn’t the defense to help rival quarterbacks find their way, but this stop unit is missing three main figures – most notably when it comes to defending the passing game – with top pass rush T.J. Watt out and veteran members of the secondary missing, including CB Joe Haden and S Minkah Fitzpatrick.

Pittsburgh ranks middle of the road in Pass Defense DVOA at Football Outsiders (15th) and hasn’t played a passing game this good in a long, long time (at Green Bay in Week 4). The Steelers secondary is now stretched thin against a savvy and sizable Bolts receiving corps and without Fitzpatrick patrolling the defensive backfield, Herbert has a green light to test this team over the top.

If the Chargers can get Herbert going early and force the Steelers to play from behind, Pittsburgh will have to steer away from its methodical short-yardage attack and stretch this conservative Matt Canada playbook further downfield.

Roethlisberger’s accuracy dwindles when asked to leave his comfort zone and Pittsburgh ranks 24th in EPA per drop back (+0.013). This is the weakest passing game Los Angeles has faced all season and if the Bolts can make the Steelers’ playbook one-dimensional, this spread shouldn’t be too much of a chore.

The biggest task for Los Angeles will be stopping the run: something that has plagued this defense all season. The Chargers sit dead last in Run Defense DVOA, allowing 4.8 yards per carry, and are missing starters on the defensive line. Los Angeles has also struggled to stop drives on third down, allowing a third-down success rate of 48.89 percent over the last three outings.

While the Steelers don’t utilize traditional handoffs much (just 38% of snaps) they do find other ways to get the ball in the hands of budding rookie RB Najee Harris, who has exploded for gains over the past five outings. Harris has carried the ball at least 23 times in each of those contests and caught a total of 16 passes for 119 yards receiving.

The Bolts' defense has given up big scores over its last five showings, allowing an EPA per play of +0.105 which ranks 30th in the league during that span. That porous stop unit and an offense that runs the second-fastest tempo in the league (26.27 seconds/play) are reasons why the Chargers have gone Over the total in three of their last five games.

With the Steelers down key bodies in the secondary and Herbert anxious to break out early on, expect L.A. offensive coordinator Joe Lombardi to test this defense with some deep shots over the top – which strays from his recent play-calling tendencies.

This pass attack has been pretty tame, with Herbert averaging only 7.2 intended air yards per throw on the season and the Bolts offense topping out at 26 yards as the longest passing play in two of the last four games.

But with the Bolts back home on the fast track inside SoFi Stadium, Fitzpatrick out due to COVID and Watt not closing in on the QB, Herbert will have time to throw and face no trouble topping this modest total for his longest pass on Sunday night. 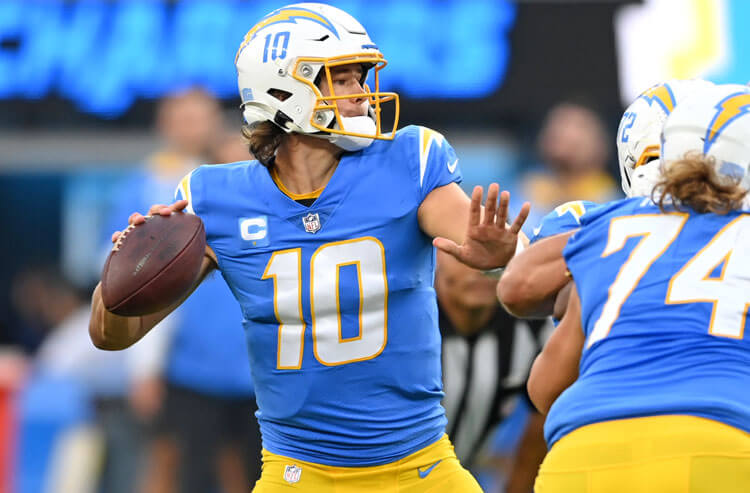