The Seahawks are without Russell Wilson for the foreseeable future, yet it's the defense that's still the biggest problem. Can Seattle's stop unit — and new QB Geno Smith — win in Pittsburgh against Big Ben and the Steelers? Find out with our SNF picks. 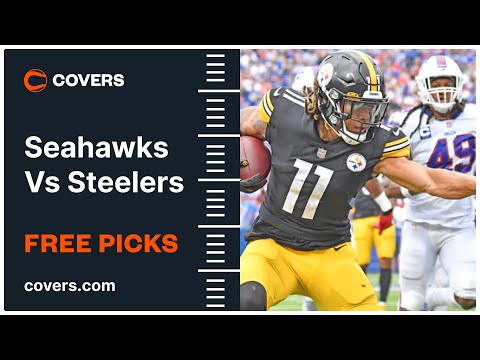 No Russell Wilson means some of the star power of Week 6's Sunday Night Football matchup is gone, but the Seattle Seahawks will try to get by with Geno Smith when they visit the Pittsburgh Steelers at Heinz Field.

Wilson's finger injury led NFL betting odds to have Seattle as a 4.5-point underdog against a Pittsburgh team that snapped a three-game slide with a home victory in Week 5, improving to 2-3 on the season. The Seahawks, also 2-3, have had extra time to prep for Pittsburgh since playing last Thursday.

Here are our free NFL picks and predictions for Seahawks vs. Steelers on Sunday, October 17.

The look-ahead line for this game set back in the spring was Steelers -1.5. But with Wilson expected to miss an extended period after injuring his throwing hand last Thursday, the official Week 6 opener has Pittsburgh as a 3.5-point favorite and that was quickly bet up to -4.5, with some books dealing Steelers -5. The total opened at 43.5 points and is down to 42.5.

The Steelers are 18-10 ATS (64 percent) in home non-conference games in the regular season under head coach Mike Tomlin (since 2007). Find more NFL betting trends for Seahawks vs. Steelers.

Losing your franchise QB is never great. However, as it pertains to the Seahawks and Wilson’s absence in Week 6, things are about as good as they could be.

Veteran backup Geno Smith has been with the team for a while and knows this playbook inside and out – showing that with a solid effort in relief last Thursday. Seattle also benefits from the timing of that Wilson injury, happening in a midweek contest and giving the offense added time to adjust.

Too bad that extra time off couldn’t fix the Seahawks’ defense.

Even if Wilson was healthy, football bettors would be hesitant to hop on Seattle due to a disaster of the defense. The stop unit has been historically bad, according to ESPN Stats & Info, with the Seahawks allowing 450 yards or more in four straight games – tied for the longest streak in NFL history of 450-plus yards allowed.

The Steelers aren’t the Rams, but this offense is starting to gain traction after struggling through the first four outings of 2021 and Pittsburgh has a chance to build momentum from Week 5’s win over Denver, putting a three-game losing streak behind them.

On the other side of the ball, Pittsburgh’s defensive stats don’t have the same shine as last season, when they ranked No. 1 in the land. Injuries and opposition have worked against the Steelers to open the schedule, playing QBs like Josh Allen, Derek Carr, Joe Burrow, and Aaron Rodgers in the first four games before getting the best of Broncos QB Teddy Bridgewater last Sunday. Smith falls well behind those opposing passers.

Pittsburgh still brings plenty of pressure, boasting a rate of 28.6 percent per opponent dropback (fifth-highest) and owning a hurry rate of 16.8 percent (third). It faces a Seahawks offensive line that allowed Wilson to feel the heat on more than 32 percent of dropbacks with an adjusted sack rate of 8.2 percent (26th) at Football Outsiders.

The move from -3.5 to -5.0 is something we can live with — this spread will likely flirt with six by kickoff on Sunday night, and it’s vital to get Pittsburgh below that key number.

As mentioned, Smith is a pretty good option considering the drop-off between most starters and backups. He was able to connect on 10 of 17 throws for 131 yards passing with one touchdown and an interception that wasn’t his fault (WR Tyler Lockett tripped) versus L.A. last Thursday.

The extra time off allows Smith to work on timing with the first-teamers as well as gives offensive coordinator Shane Waldron a window to tinker with the playbook to best fit Geno’s skill set. Obviously, there are game-changing plays that Wilson seems to pull out of thin air, but the Seahawks aren’t doomed offensively.

As for Pittsburgh’s offense, it faces little resistance from the Seattle stop unit. The Seahawks lug a +0.111 EPA per play (25th) into Week 6 and could get ripped up by this quick-hitting Steelers attack, allowing a total of 706 yards after the catch to foes through five games (sixth most) and giving up 4.5 yards per run.

Pittsburgh puts foes on their heels with one of the fastest paces in the NFL, snapping the ball every 26.83 seconds (ninth-fastest). The Rams run a similar tempo and amassed 476 yards of offense last Thursday. The Steelers won’t need that output to top this modest total on Sunday night.

With JuJu Smith-Schuster out with a shoulder injury and WR James Washington still on the mend from a groin ailment, Claypool is Ben Roethlisberger’s top target in Week 6.

He’s coming off a huge 130-yard effort, catching five of six targets in the win over Denver last weekend. Funny enough, it was one of Claypool’s less busy games of 2021 after being targeted 15 times (nine catches) in Week 4 and nine times (three catches) in Week 3.

Seattle has struggled to slow down opposing passing games – ranked 28th in pass defense DVOA – and has allowed No. 1 receivers to be targets 9.5 times per outing, which sits fourth-most for WR1 in the NFL. 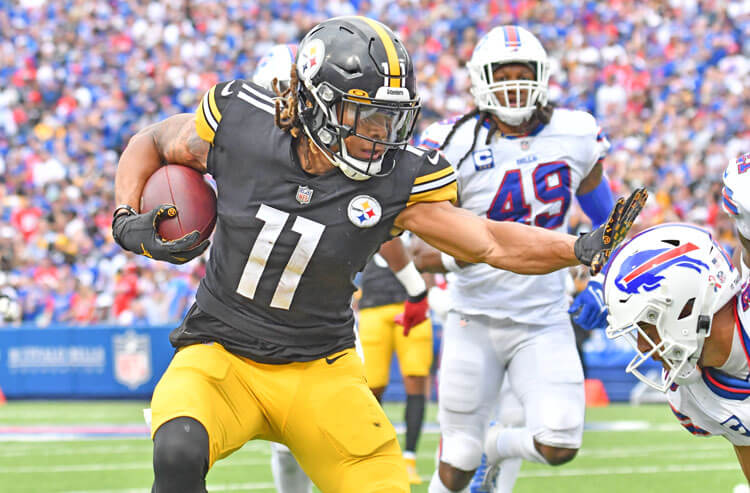