Patriots vs Eagles Preseason Picks and Predictions: Trying to Impress

Bill Belichick has nothing left to prove, but new Eagles head coach Nick Sirianni can make a good first impression with an impressive preseason. Our Patriots vs. Eagles picks and predictions dives into how that will impact NFL betting on Thursday.

The second week of NFL preseason betting rolls out with the Philadelphia Eagles hosting the New England Patriots on Thursday.

These teams are familiar with each other after holding joint practices this week, allowing Eagles rookie head coach Nick Sirianni to not only study his latest exhibition opponent but learn from a master in Patriots coach Bill Belichick.

The 1.5-point spread is one of the shortest lines on the Week 2 preseason board, with New England coming off a Week 1 win and Philadelphia falling in its exhibition opener. Here are our free NFL picks and predictions for Patriots vs. Eagles.

Patriots head coach Bill Belichick played Under the Week 2 preseason total in 2019 but had gone Over the number in New England’s second preseason contest in nine straight years going back to 2010. Since 2007, the Patriots are 11-2 O/U in Week 2 of the preseason. Find more NFL betting trends for Patriots vs. Eagles.

The Eagles may have lost their 2021 preseason debut to the Pittsburgh Steelers, but they looked good in the opening half when first- and second-teamers took the field, holding a 16-7 lead before getting blanked 17-0 in the final 30 minutes.

Quarterback Jalen Hurts was solid in limited work, going 5 for 7 with 54 passing yards, and those two incompletions came on drops. He’ll get added snaps in Week 2 of the preseason, with Philadelphia working in a brand-new system under Sirianni and coordinator Shane Steichen.

Hurts only ran once in Week 1 versus Pittsburgh but can make something from nothing when plays break down, and those mobile QBs are worth their weight during the preseason when timing and chemistry are hard to come by.

Backing up Hurts is the immortal Joe Flacco, who was 10 for 17 for 178 yards and a touchdown versus the Steelers, and third-stringer Nick Mullens, who’s battling the veteran for the No. 2 spot on the depth chart.

New England posted a victory over Washington in its preseason opener, edging the Football Team (or soon-to-be Red Hogs, we can only hope) 22-13 thanks to a 16-6 surge in the second half.

Cam Newton played two series under center for the Pats before giving the keys to rookie QB Mac Jones, who went 13 for 19 with 87 yards and played 33 snaps well into the third quarter. Journeyman backup Brian Hoyer came in for mop-up duty in the final frame.

Belichick is usually drum-tight about his preseason plans, but bettors should expect a similar division in work on Thursday. New England really wants to get Jones as much game action as possible in preparation for his likely stab at the starting job at some point in the regular season.

New England is 29-32-4 ATS under Belichick in exhibition play and the Hoodie will take a long look at his defensive depth in Week 2’s matchup, with so many new faces in the stop unit. While preseason results mean little to an established head coach like Belichick, they can go a long way in winning over the front office, locker room, and fans for rookies like Sirianni.

We’ll grab the points with the home side Thursday, knowing Sirianni is motivated, and the starters will build on an impressive showing in Week 1.

This total opened at 37 points and has climbed to 38.5, with bettors banking on more offense as first-teamers stretch their legs in the second tune-up tilt of the summer.

This movement could also be a knee-jerk reaction to the low-scoring results from Week 1 of the preseason – a collective 3-13 Over/Under count – with those early bettors bracing for a regression to the Over.

Both teams have capable No. 1 and No. 2 quarterback options, which is better than most preseason setups. With the NFLX schedule compressed to just three games in 2021, the Week 2 matchups take on more of a dress rehearsal role and we’ll see extended action from those top QBs and first-team skill players, including the running backs.

The Patriots rumbled for 127 yards on the ground on 25 carries versus the WFT defense while the Eagles, who just cut RB Kerryon Johnson, only handed off 11 times and sat RB1 Miles Sanders. Sanders’ workload for Week 2 of the preseason is up in the air, according to Sirianni, but Philly still has Jordan Howard, Kenneth Gainwell, and Boston Scott in the backfield. 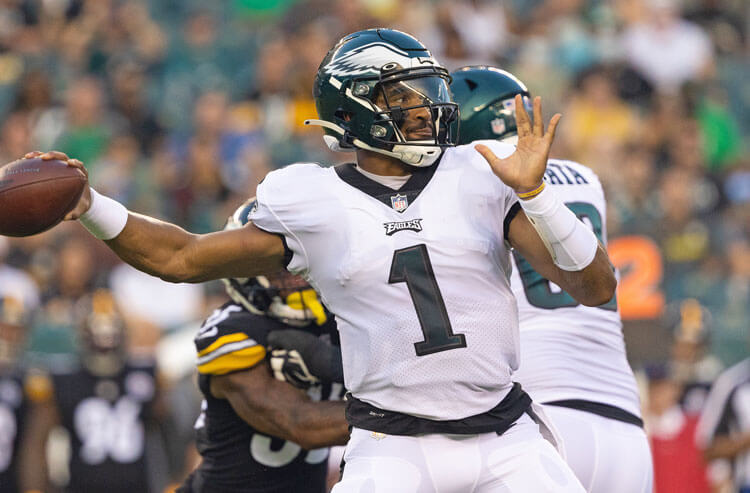 Patriots vs Eagles Preseason Picks and Predictions: Trying to Impress
Provided by