Chiefs vs Cardinals Preseason Picks and Predictions: Mahomes Is Where the Heart Is

While Kliff Kingsbury plays lineup games, straight-shooter Andy Reid has said he'll be giving his stars some burn in the first half. Is that enough to back the reigning AFC Champs in preseason action? Find out with our Chiefs vs. Cardinals picks.

The Kansas City Chiefs take on the Arizona Cardinals under the Friday night lights in Week 2 of NFL preseason betting.

Arizona, coming off a slim win over Dallas in Week 1 of the exhibition slate, is a 3-point underdog at home to the defending AFC champs, who won their opening preseason contest with San Francisco last week. It appears the Chiefs’ superstars will see more game time when this tune-up tilt kicks off at 8 p.m. ET Friday.

Here are our free NFL picks and predictions for Chiefs vs. Cardinals in Week 2 of the preseason.

I’ve got a bone to pick with Arizona head coach Kliff Kingsbury, who last week told reporters No. 1 QB Kyler Murray and some of his key starters would see action in Week 1 of the preseason. They did not, with Kingsbury pulling the plug on those plans just ahead of that run-in with the Cowboys.

The Cardinals are once again being cagey about the playing time of Murray and the first-teamers in Week 2 of the exhibition schedule. Standout WR DeAndre Hopkins won’t be playing and Murry may only get a series or two before handing snaps to Colt McCoy and dual-threat QB Chris Streveler, who combined for 162 yards of offense versus Dallas.

Kansas City head coach Andy Reid was stingy with the minutes for his starters in a Week 1 preseason victory over the 49ers, playing them for the first quarter, but told reporters his first teams would be most of the first half versus Arizona – that includes mega-star QB Patrick Mahomes. That announcement had significant impact on the odds for this matchup, bumping KC to -3 and injecting the total with plenty of points.

While Arizona was able to edge Dallas 19-16, the offense had to settle for four Matt Prater field goals and went 5 for 13 on third downs. Brief appearances by the starters should help improve those stats, but it won’t be enough to keep up with the Chiefs if Reid really does play Mahomes & Co. for the opening 30 minutes.

And for what it’s worth, Kansas City’s third and fourth-stringers outscored San Francisco 12-7 in the second half of last week’s exhibition outing, pushing Kansas City into the win column with a 19-16 finish and covering as 2.5-point underdogs.

I’m going to go with what I know and that’s Reid running out his starters for the opening two quarters while Kingsbury plays games with preseason bettors.

As mentioned above, the Over/Under for this Week 2 game shot up when Kansas City announced Mahomes and the starters would see more action. The total opened at 37 points – coming off a Week 1 slate that finished 3-13 O/U overall – and moved to 41 with sharp money piling on the Over.

Both Kansas City and Arizona stayed below their respective Week 1 totals of 37 and 39 points with a pair of 19-16 wins. Those games featured plenty of play from the third and fourth string QBs as well as a heavier workload on the ground: Arizona ran 31 times while Kansas City handed off on 22 snaps.

Reid said he wanted the offense to get used to Mahomes’ cadence and build some chemistry, which would imply he’ll likely go pass-heavy in the opening half before kicking the tires on his rushing corps in the second, knowing Clyde Edwards-Helaire and Darrel Williams are his top backs.

Arizona’s receiving depth chart is pretty much written in ink, but the rushing game will need a polish after losing Kenyan Drake this offseason. The Cardinals have Chase Edmonds and James Conner atop the depth chart and could flash some two-RB sets on Friday, with Conner coming off the COVID list this week. A ground-heavy approach makes for short gains with the clock ticking – always a good mix for Unders.

Forty-one points is an awful lot for a preseason game, even with Mahomes on the field for a half. Arizona’s offense stalled out and Kingsbury was happy settling for field goals rather than going for it on fourth down and extending drives. We’re going to buyback the big move and go Under in Week 2. 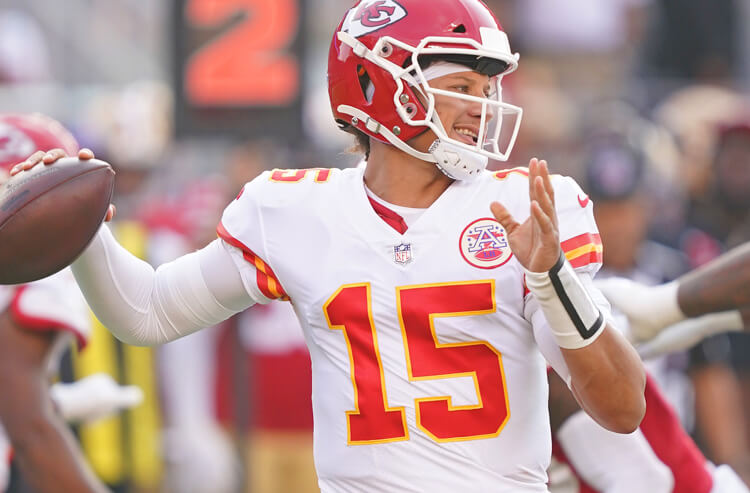 Chiefs vs Cardinals Preseason Picks and Predictions: Mahomes Is Where the Heart Is
Provided by