Bengals vs Washington Preseason Picks and Predictions: Will Starters Factor in Enough?

We can expect more snaps from the starters with NFL preseason betting entering its second week, but will Ryan Fitzpatrick and Co. play enough to impact the total? Our Bengals vs. Washington picks and predictions breaks down how the QBs will factor in.

NFL preseason betting enters its second week, and for the Cincinnati Bengals, that means putting a worrisome offensive line to the test against a loaded Washington Football Team defensive front.

Despite an ugly second half against the Patriots to begin preseason play, WFT will host Cincinnati as five-point favorites, with Cinci coming off a win over the Buccaneers.

Read on for our free NFL betting picks and predictions for Bengals vs. Washington on August 20.

The Under went 13-3 in the first week of the 2021 preseason, including 2-0 in games involving Washington and Cincinnati. Find more NFL betting trends for Bengals vs. Washington.

Though Washington's defense collapsed deep into its first preseason game as the bench emptied, there were a few encouraging signs for bettors. Both first units, on offense and defense, played well against the Patriots' first team. And, more pertinent to betting against the spread, was the play of their quarterbacks.

Ryan Fitzpatrick delivered a few superb throws in limited action, Taylor Heinicke took care of the ball and led the first touchdown drive of the game, and Steven Montez completed 71 percent of his passes while throwing the only TD of the day. There was little flash, with the trio combining to average 5.4 yards per attempt, but they did enough to show the WFT should be competitive wire-to-wire in August.

Competency at quarterback, especially after the starters bow out, is key to preseason results, and Washington's signal-callers were all competent last week. Better yet, this week will see the return of Kyle Allen, who started four games a year ago before a gruesome ankle injury ended his season. Though he has reportedly struggled since returning to practice, this season will be Allen's fourth working with WFT OC Scott Turner, so if nothing else, his command of the offense should be seamless upon returning.

The Bengals, meanwhile, will continue along with their preseason schedule without Joe Burrow, who is yet to return from the torn ACL that ended his rookie season. In his absence, Kyle Shurmur and Brandon Allen had a similarly efficient game to Washington's trio of passers, save for an interception each. After Shurmur had twice as many drives as Allen against the Bucs, those roles should be reversed as the Bengals' starters get more run (and Allen, the presumptive backup, stays out with them).

The strength of the Bengals in their win over the Patriots, however, was their defense, which flew around the field and caused three turnovers. The experience on defense is up front, where the perennially underrated Sam Hubbard is joined by free agent addition Trey Hendrickson on the edges, while D.J. Reader causes havoc inside.

Neither Cincinnati's quarterback play nor defense is superior to that of Washington's, and with the starters in line to play more this week, that talent gap will be apparent.

Even with consistent play from its quarterbacks, Washington was only able to muster 13 points against New England, going scoreless in two of four quarters along the way. Even with additional possessions for Fitzpatrick and the starters, and a cameo for Allen, it's clear the WFT offense is still in early preseason mode and expectations should reflect as much ahead of Week 2.

Fitzpatrick's playtime in this one is a bit of a wildcard when betting the total, if only because of his ability to create an explosive play with downfield shots — and a blossoming connection with Terry McLaurin increases that possibility. However, the Bengals' new-look secondary performed well against Tampa Bay, and free safety Jessie Bates is one of the best players at his position in the league and can negate Fitzpatrick's Uncle Rico tendencies.

On the Bengals' side, neither Allen nor Shurmur inspire much confidence, though Allen will be helped by Cincinnati's talent across skill positions. However, any positive bump will be mitigated by Washington's great defensive line, which should absolutely feast in such an advantageous matchup.

Fitzpatrick won't go deep enough into this one for us to back the Over with the Bengals' offense involved as well. Take the Under on Friday night.

Did you know that if you parlayed this week’s NFL Bengals vs. Washington picks, you could win $26.45 on a $10 bet? 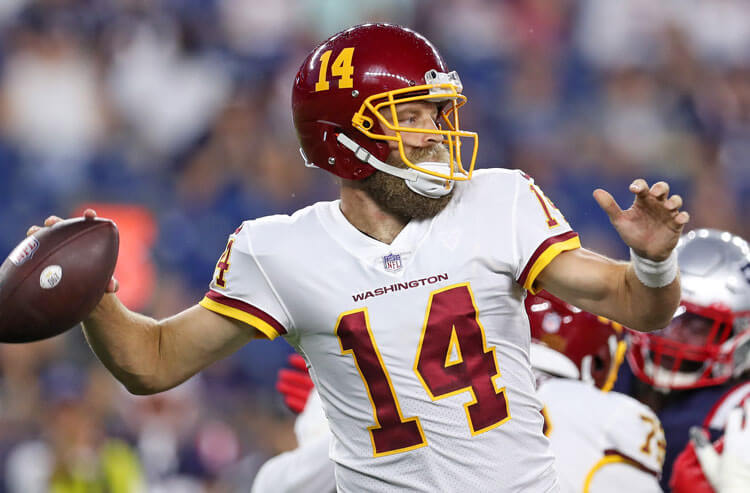 Bengals vs Washington Preseason Picks and Predictions: Will Starters Factor in Enough?
Provided by