The Alabama Crimson Tide will meet the Florida Gators for the SEC title this weekend, and while the teams competing isn’t surprising...the college football betting spread might be.

The Crimson Tide are bulldozing every team and spread in their path, while the Gators are coming off a shocking loss to LSU. As a result, Bama is a big 17-point favorite. Will the Tide keep rolling, or will the Gators pull off the upset?

Here are our best college football free picks and predictions for the SEC Championship between No. 1 Alabama and No. 7 Florida, with kickoff set for Saturday, Dec. 19 at 8:00 p.m. ET at Mercedes-Benz Stadium in Atlanta, GA.

This game will be played indoors at Mercedes-Benz Stadium in Atlanta, Georgia. Be sure to monitor the gametime conditions for other conference championship games with our NCAA football weather info.

Choose whatever term you’d like to describe Alabama this season: The Tide are on a mission. Bama can’t be stopped. The Alabama Death Machine is fully engaged. Whatever you like. Because simply put, Alabama is dominant.

The Crimson Tide are a perfect 10-0 SU and look to be getting stronger each week. What’s most impressive about their current run is that the Tide are a remarkable 7-0 ATS over their last seven games, while facing an average of nearly 24.5 points of chalk per game over that span—thanks in part to a next-level offense that puts up nearly 50 points and 540 yards per contest.

Meanwhile, the Gators suffered a massive stumble heading into this SEC Championship, losing outright to LSU 37-34 as 24-point chalk. The loss also essentially torpedoed any hope the Gators had for making the College Football Playoff. So, will Florida have much motivation heading into this game?

Well, this SEC championship will also be billed as a Heisman showdown with Alabama’s Mac Jones going against Florida’s Kyle Trask. But this really shouldn’t be a conversation. While Trask is having a great season, Jones is the most outstanding player on the most outstanding offense in the country.

Jones is completing 76.4 percent of his passes for 3,321 yards with 27 touchdowns compared to just three interceptions. And that is while basically playing just three quarters a game for the past six weeks. Jones is throwing to arguably the best receiving corps in the country, even with losing Jaylen Waddle to injury, and has the luxury of handing the ball off to Najee Harris in the backfield.

They face a Florida defense that has some OK numbers on the surface, but has shown it can be vulnerable to giving up big chunk plays against capable teams—and Alabama is the most capable of all.

Trask leads the nation’s best passing attack for the Gators and he and star tight end Kyle Pitts should be able to move the ball a bit, but the Bama defense has shown a lot of improvement and should be able to key on the passing game in this one. Additionally, since giving up 48 points to Ole Miss back in October, the Tide have given up just 77 total points in their last seven games.

On top of all that, Alabama has won the SEC Championship game in each of Nick Saban’s last six appearances, winning by an average margin of 18.5 points. Roll Tide.

This is a matchup between two of the highest-scoring teams in the country, so it shouldn’t be a shock to see a total approaching 75. But is the number a tad too high?

One of the reasons Alabama has looked so good has been the steady improvement of its defense as the season has moved along. As mentioned above, the Tide have surrendered just 77 total points in its last seven games. While Florida will be the best offense Bama has faced over that stretch, the one-dimensional nature of the Gators offense will hold them back in this game.

Alabama should build itself a nice lead then lean on Harris and the running game to drain the clock in the second half, resulting in a game that sneaks below the number.

No college football team gets off to better starts than Alabama. Of schools that have played at least five games in this topsy-turvy season, no one has averaged more first-half points than the Tide’s 29.1 per contest. At the same time, Bama has allowed a total of just 33 first-half points over its last six games.

Take the Tide to head into the break with a healthy lead and cover the first-half spread. 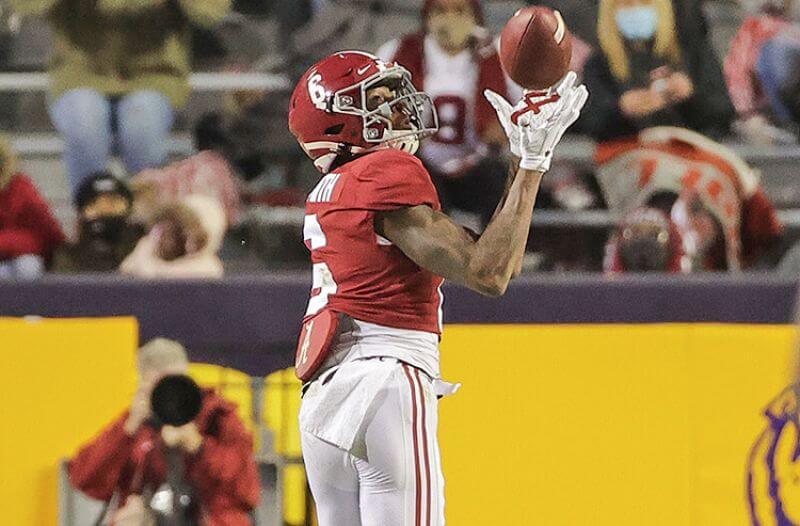