The Boise State Broncos have the experience, but No. 24 San Jose State is undefeated for a reason as they get ready to battle for the Mountain West Championship on Saturday.

In the upside-down world that is the 2020 college football season, the Boise State Broncos give us some semblance of normalcy, as they return to the Mountain West title game for the fourth consecutive year.

The Broncos will try to secure their third conference title in four years when they take on the undefeated San Jose State Spartans, who are looking for their first Mountain West title in program history.

Here are our best college football betting free picks and predictions for the Mountain West Championship between Boise State and No. 24 San Jose State, with kickoff set for Saturday, Dec. 19 at 4:15 p.m. ET at Sam Boyd Stadium in Las Vegas, NV.

It should be a beautiful afternoon for college football in the desert. The forecast is calling for clear skies and temperatures in the mid-50s with minimal wind. Be sure to monitor the gametime conditions with our NCAA football weather info.

The Over is 4-0 in Boise State's last four games after scoring less than 20 points in their previous game. Find more NCAA betting trends for Boise State vs. San Jose State.

One thing that will be different about Boise State’s appearance in this Mountain West title game is that it won’t be played on the blue turf of their home field at Albertsons Stadium. But home field or not, the Broncos will still be favorites, with oddsmakers giving them 6.5 points of chalk for this matchup.

Boise State went 5-1 this season (3-3 ATS), including 5-0 in conference play. The Broncos' lone loss came against a very good BYU team. But this is not as strong a Boise State team we are used to. Led by quarterback Hank Bachmeier, the Broncos are just 86th in total offense, with a big culprit being a running game that just hasn’t been able to get anything going.

Lead back Andrew Van Buren averages just 3.6 yards per carry and the team ranks 108th in rushing yards per game. Boise State has been solid on defense, but has been gashed for a few yards on the ground.

San Jose State is known for its passing attack, but this Spartans team has looked good in all phases of the game on their way to a 6-0 record. San Jose State has also been a great bet all year going 5-0-1 ATS.

The man under center for the Spartans is Nick Starkel. The senior QB is having a fantastic year for the Spartans, completing 66.3 percent of his passes for 1,453 with 13 touchdowns, compared to just four interceptions in just six games. But what has made the Spartans really dangerous is that they’ve added a running game. Running back Tyler Nevens has rushed for 454 yards – at a ridiculous clip of 8.9 yards per carry – to go along with five scores. The SJSU defense has been solid as well, ranking 34th in yards allowed per game and giving up 17.5 points per contest.

The Broncos have the experience, but the Spartans are no fluke and can certainly win this game outright, but take the points to be safe.

The total for the Mountain West Championship is sitting at 55 as of Thursday afternoon, and that number looks a little low.

San Jose State averages 30.3 points per game this season and have shown they can score against good defenses such as San Diego State. But more importantly, with the balance they have on offense, it doesn’t seem like Boise State has the ability to slow down the Spartans.

For the Broncos, despite not putting up a ton of yards, they have still managed to put up 36.2 points per game on offense this season. Add in their experience and resiliency and they should keep this one close.

Additionally, the Over is 5-1 in Boise State’s six games this season, and while SJSU has been a good Under bet, it could be a bit tougher for them to slow down the Broncos—which means we like the Over in this one.

Everything we’ve said to this point means the San Jose State team total is too tempting to pass up. The Spartans have scored lower than this number just once all season, and that was their season-opening game against Air Force.

Plus, Boise State is giving up 26 points per game and having trouble containing competent offenses. 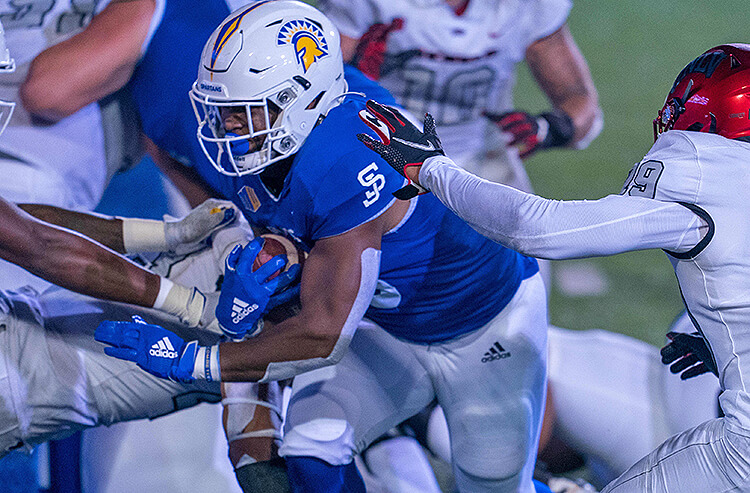 Alabama vs Mississippi State Picks and Predictions: Tide Look To Get Back On Track
Andrew Caley | Oct 16, 2021

Kentucky vs Georgia Picks and Predictions: Underdogs Get Best of the Dogs
Jason Radowitz | Oct 16, 2021

Auburn vs Arkansas Picks and Predictions: Tigers Too Fierce for Hogs
Jason Radowitz | Oct 15, 2021
About Us
Contact Us
Careers
Our Team
Brand
Testimonials