Chanticleers RB CJ Marable ran for 73 yards and a touchdown in a win over Louisiana on October 14. He'll look for a better performance in the Sun Belt Championship, as he's averaging 136.3 yards over his last three games.

You want the best college football betting story of the year? Look no further than Conway, South Carolina.

The Coastal Carolina Chanticleers have charmed the nation with their out-of-nowhere undefeated run. Of course, it doesn’t hurt that they have a fierce, teal rooster as their mascot, either.

The Chants are an AP Top-10 team with dreams of a perfect season, and they can move a step closer on Saturday with a home victory against Louisiana in the Sun Belt Championship.

Let’s take a look at our best college football free picks and predictions for No. 17 Louisiana at No. 9 Coastal Carolina, with kickoff scheduled for Saturday, December 19 at 3:30 ET.

Brooks Stadium will see mostly sunny skies and a high of 53 degrees with wind out of the East at 4 mph. There’s only a small, 6 percent chance of rain. Be sure to monitor the gametime conditions with our NCAA football weather info.

The Chanticleers are 4-0-1 ATS in their last five home games. Find more NCAA betting trends for Louisiana vs. Coastal Carolina.

Quietly overlooked in a season of surprise football teams, the Louisiana Ragin’ Cajuns make the trip out east having won six straight and sitting at 9-1 SU on the season.

Their lone defeat? A 30-27 loss back on October 14 to the very team they’ll be facing on Saturday: Coastal Carolina. Two weeks ago, Louisiana escaped with a 27-24 victory against Appalachian State, a game with little meaning that the Ragin’ Cajuns could have very well lost. Quarterback Levi Lewis struggled mightily, going 8-23 for 101 yards, but running back Elijah Mitchell ran for 95 yards and Trey Ragas added two scores on the ground.

Much like Louisiana, the Chanticleers are also fortunate to be coming into this matchup off a victory. Coastal won a 42-38 shootout on the road at Troy last week, thanks to a balanced offensive attack. Quarterback Grayson McCall threw for 338 yards and three touchdowns with receiver Jaivon Heiligh recording 11 catches for 138 yards and two scores. Coastal Carolina also got 120 yards from CJ Marable on the ground.

The Chanticleers won their last game by scoring a touchdown with 45 seconds to play. They’ve been a team of destiny thus far, and the trends back that up. Coastal is 5-0 this season ATS versus teams with winning records, and in playing in front of a home crowd for the conference title, I expect them to cover the small chalk.

The Chanticleers have one of the better linebacking units in the country and despite the extra week to prepare, it’s hard to believe in the Ragin’ Cajun offense based on its disjointed effort against the Mountaineers.

The early money has hit the Over, but I disagree. The Under is 6-2 in Louisiana’s last eight games and I’m betting on the score sliding just Under the number.

It’s easy to get caught up in Coastal Carolina’s success this season, but the Chanticleers are undefeated for a reason and have the numbers to back it up.

They’re averaging 37.5 points per game and dropped 514 yards of total offense last time out against Troy. They’ve got enough weapons to eclipse their team total and capture the Sun Belt Championship in the process.

Did you know that if you parlayed today’s NCAA Louisiana vs. Coastal Carolina picks, you could win $62.18 on a $10 bet? 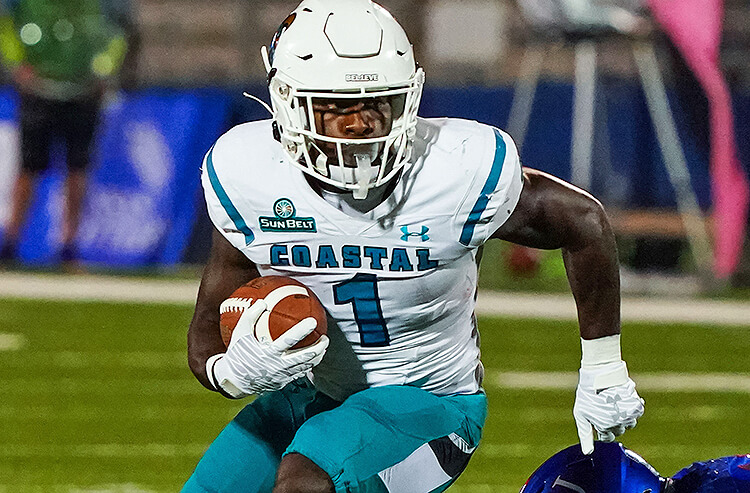 Oregon vs UCLA Picks and Predictions: Back the Bruins at Home
JD Yonke | Oct 23, 2021
About Us
Contact Us
Careers
Our Team
Brand
Testimonials