The Big Ten had to bend the rules a bit, but the Ohio State Buckeyes will be in the conference championship game for the fourth consecutive year. On the other side, Pat Fitzgerald keeps working his magic at Northwestern as the Wildcats return to the Big Ten title game for the second time in three years and are just one year removed from a three-win season.

Here are our best college football free picks and predictions for the Big Ten Championship between No. 14 Northwestern and No. 4 Ohio State, with kickoff set for Saturday, Dec. 19 at 12:00 p.m. ET at Lucas Oil Stadium in Indianapolis.

This game will be played indoors at Lucas Oil Stadium. Be sure to monitor the gametime conditions for other conference championship games with our NCAA football weather info.

Northwestern has not been a great bet when going up against Ohio State. The Wildcats are just 1-7 ATS in their last eight games against the Buckeyes. Find more NCAA betting trends for Northwestern vs. Ohio State.

Yes, originally the Big Ten had put in a rule that if a team did not compete in at least six football games in this COVID-shortened 2020 season, that it would not be able to play in the conference championship game. That was until Ohio State was involved. So, of course, the conference was going to bend the rules.

And to be fair, why not. The Big Ten was the one to implement the rules and the Buckeyes are probably one of the four best teams in the country, and it all starts with quarterback Justin Fields.

The Buckeyes’ signal-caller has completed 78.1 percent of his passes for 1,407 yards with 15 touchdowns, compared to three interceptions, in five games. He’s also added 239 yards and five scores on the ground. Fields also has the luxury of playing behind one of the best offensive lines in the country, which has also started to open up holes for the Buckeyes’ running back duo of Master Teague III and Trey Sermon, who average 4.9 and 6.3 yards per carry, respectively.

But Ohio State will be up against what is another excellent Northwestern defense. Led by Paddy Fisher and Blake Gallagher, the Wildcats rank 12th in total defense and are allowing just 14.6 points per game this season.

Unfortunately, the offense just doesn’t pull its weight, ranking 100th in total offense and 90th in points per game at 25.3. With a defense this strong, that is usually good enough, but that likely won’t be the case going up against the firepower of Ohio State.

The Wildcats defense is good enough to slow down Ohio State for a while. But eventually, the Buckeyes’ talent be too much to handle and they’ll hit some big plays—and the Wildcats offense won’t be able to keep up. Lay the points with the favorites.

The total for the Big Ten Championship is on the board at 57.5 as of Wednesday evening and that would be the lowest for Ohio State this season, while at the same time being the highest total for Northwestern.

As mentioned, the stout Northwestern defense and maybe a little rust for an Ohio State team that will have played just once in the last four weeks will keep the scoring down a bit early. But once the Buckeyes take over, they will lean on the run game late, while the Wildcats' below-average offense won’t do much against an improving Ohio State defense that can really shut down the run and cause turnovers with the best of them.

Did you know that if you parlayed today’s NCAA Northwestern vs. Ohio State picks, you could win $55.60 on a $10 bet? 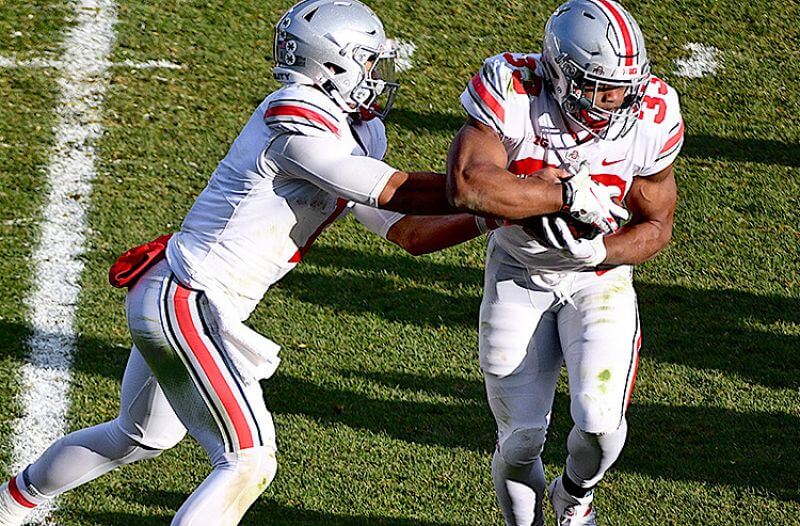