A quick note on the Triple Option’s absence last week. This is a hard thing to talk about, so I’ll just say it. My fiancé lost her father suddenly last week and his death has shaken our family to its core.

Losing a family member is always tough, but it is even tougher around the holidays. So, just a quick reminder, hug all your loved ones and share kindness with all this holiday season, while I share ATS picks for every conference title game in college football this week.

The Triple Option returns with my best college football picks and predictions for Week 16.

Before last week, Marshall was another Group of Five team pounding its chest looking for more respect from the College Football Playoff committee. Then came the game again Rice. College football bettors were stunned when the Thundering Herd lost outright to the Owls 20-0 as 24-point favorites.

Now, Marshall will have to settle for a C-USA championship with their New Year’s Six bowl hopes dashed. But that will be easier said than done going up against the UAB Blazers, who are making their third straight appearance in the conference championship.

Despite the humbling loss, Marshall’s defense is special, and they're going up against a one-dimensional UAB offense. On top of that, the Herd are playing at home, take them to bounce back and lay the points.

The Buffalo Bulls and star running back Jaret Patterson will look to win their first MAC championship since 2008 when they meet the Ball State Cardinals Friday at Ford Field in Detroit, MI.

Ball State has had a nice season and has a decent enough offense, but they won’t have their top back for this game and lost to a team that Buffalo beat by 30. And nobody has been able to stop Patterson, so I won’t be fading him here.

USC is the only super-outside shot the Pac-12 has at returning to the College Football Playoff, but the Trojans will have to crush the Oregon Ducks in the conference championship game Friday at Memorial Stadium in Los Angeles. Then, hope for absolute chaos.

USC has had its issues, but have ridden Kedon Slovis’ arm to a 5-0 record in Pac-12 play. The defense has given up too many yards, but have the talent to improve. While Oregon’s defense has not been as strong as expected, but its biggest issue this season has been turnovers. The Ducks don’t cause any, while giving up the ball way too much.

The Ducks might be the most talented team in the Pac-12, but they just haven’t played a complete game yet, and hoping they do so against a team like USC is a big ask.

How I assume the meeting the Big Ten had this week went:

“You can’t compete in the Big Ten Championship Game without playing in at least six games.”

“Ohio State has only played five."

“You can’t compete in the Big Ten Championship Game without playing in at least five games.”

And to be fair, why not. The Buckeyes are probably one of the four best teams in the country. Justin Fields is awesome and he plays behind one of the sturdiest offensive lines in the country, which has also started to open up holes for the Buckeyes’ running back duo of Master Teague III and Trey Sermon.

Northwestern is led by another strong defense, but the offense just doesn’t pull its weight. That defense might even be good enough to slow down Ohio State for a bit, but the Buckeyes will eventually hit some big plays and the Wildcats won’t be able to keep up.

OK. This has been a pretty chalky column so far, so let’s change that up in the Big 12 Championship game, where the Oklahoma Sooners will meet the Iowa State Cyclones.

Iowa State is the Big 12's best chance at making the CFP, but will need to upset Oklahoma for the second time this season. But this Sooners team has won this title game each of the last three seasons.

The Cyclones beat the Sooners 37-30 as 7.5-point underdogs back in early October, and have won five in a row thanks to a balanced offense led by quarterback Brock Purdy and running back Breece Hall.

The Sooners still have a potent offense with Spencer Rattler at the helm, but it is one-dimensional, and the Cyclones know they can force him into some poor decisions. This one should be close.

The ACC Championship between the Clemson Tigers and the Notre Dame Fighting Irish is one of the biggest games in this topsy-turvy college football season and will have plenty of implications when it comes to the CFP.

Notre Dame obviously took the first meeting this season. A 47-40 overtime thriller back in early November. But some guy named Trevor Lawrence didn’t play that game. Oh, and a handful of the Tigers defensive starters didn’t as well.

Don’t get me wrong, the Irish are good, particularly their defense. But Trevor Lawrence is Trevor Lawrence, and he will do Trevor Lawrence things. (How’s that for analysis?) The Notre Dame defense will keep things close for a while before Clemson pulls away late and shows that the early game didn’t really mean anything.

The Boise State Broncos return to the Mountain West title game for the fourth consecutive year and will be going up against the undefeated San Jose State Spartans, who are looking for their first Mountain West conference championship.

The Spartans are 6.5-point underdogs in this matchup, but could the wrong team be favored here? SJSU is usually known as a pass-happy bunch, but this year they have added a run game and a solid defense to the mix.

The Broncos have the experience, but this year’s team lacks consistency on offense, particularly the running game. The Spartans are no fluke and their balance means they can win this game outright and are 5-0-1 ATS this year to boot. Take the points.

The Cincinnati Bearcats have the biggest gripe when it comes to the CFP rankings. How a team losing to LSU is better than not losing a football game is baffling. But I digress.

Cincinnati is not just one of the best Group of Five teams, they look like one of the best teams in the country. Period. The Bearcats are usually known for their stout defense, but now they have the offense to match. Desmond Ridder is a true dual-threat quarterback, Gerrid Doaks is a beast in the backfield, and both play behind a studly offensive line.

Tulsa has had a good run, and has a strong defense, but the Golden Hurricane have had a few bounces go their way and are lucky to have just one loss on the year.

The Cincy offense will prove to be too much to handle in the end, while its defense will stifle a Tulsa offense that struggles to put up points on a consistent basis.

It’s the SEC Championship between Florida and Alabama. It’s the Heisman showdown between Mac Jones and Kyle Trask. It’s the biggest game of the year. Wait. What? Florida lost to LSU as 24-point favorites last week?

Seriously though. The Alabama Death Machine is fully engaged. The passing game is electric. The running game with Najee Harris is rolling. And the defense is getting better each week. On top of that, the Tide have covered the spread (most of them in the mid-20s) in seven straight games.

Yes, the Gators have a good passing attack, but there is no balance, and their defense is susceptible to giving up big plays.

Oh, and did I forget to mention that Florida lost to an LSU team that gave absolutely zero shits last week? As 24-point favorites! 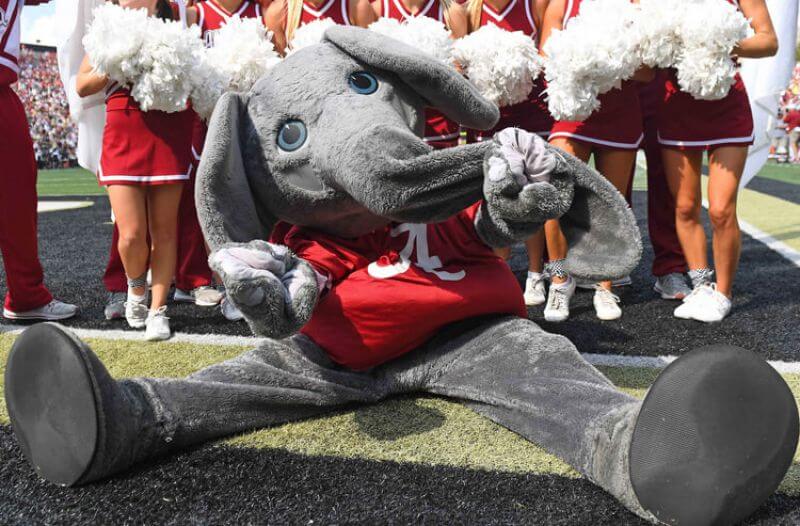