Kentucky vs Alabama picks and predictions for November 21

We haven’t seen the best team in the country play college football since October 31. Yes, that’s how long the Alabama Crimson Tide have been on the shelf due to COVID-19 outbreaks, and their return to action might not be as easy as oddsmakers are suggesting.

Will the Bama be able to knock off the rust in time to cover a massive 30-point spread against the Kentucky Wildcats?

Here are our best college football free picks and predictions for Kentucky at No. 1 Alabama. Kickoff will get underway at 4:00 ET in Tuscaloosa.

It should be a beautiful afternoon for some fall football in Tuscaloosa. The forecast is calling for mostly clear skies with temperatures in the mid-to-low 60s and minimal wind. Be sure to monitor the gametime conditions with our NCAA football weather info.

Kentucky can be an infuriating team to back at times, consistently playing to the level of its competition, for better or worse. But that could mean good things this week against Alabama. The Wildcats are 10-1 ATS in their last 11 games against a team with a winning record. Find more NCAA betting trends for Kentucky vs. Alabama.

Yes, the Alabama Crimson Tide take the field for the first time since Halloween, so it will be interesting to see how they look when they host the Kentucky Wildcats Saturday.

Before its mini-break, Alabama crushed Mississippi State 41-0, covering as 29-point favorites, but Kentucky should put up more of a fight than the Bulldogs did.

Kentucky is just 3-4 this season but hasn’t played that poorly. The Wildcats once again pride themselves on defense and running the football. Dual-threat QB Terry Wilson and RB Chris Rodriguez Jr. lead a Wildcats rushing attack that averages 195 rushing yards per game.

Meanwhile, the Kentucky defense ranks 40th in total defense and is giving up just 21.3 points per game. Maybe most importantly, they are limiting opponents to 214.1 passing yards per game. That said, Mac Jones & Co. will present the biggest challenge to the Wildcats to date.

Jones is in the thick of the Heisman race, throwing for 2,196 yards with 16 touchdowns and just two picks. Even without Jaylen Waddle, the Tide still have arguably the most dangerous passing attack in the county. Then Jones has the luxury of having Najee Harris in the backfield.

But let’s face it: 30 points is a lot to cover for anyone, let alone a team that hasn’t played in three weeks. The Kentucky defense won’t let this one get too far out of hand, as the Wildcats can lose this 45-20 and still cover. We’re betting they do.

At 58, this total might be giving the defenses a little too much credit in this matchup. While Alabama’s defense has shown some improvement since its 63-48 shootout with Ole Miss, the Crimson Tide still rank 93rd in passing defense and allow almost 400 total yards per game. Wilson hasn’t thrown for a ton of yards this season, but he has been efficient when has been called upon.

Additionally, Alabama has faced a couple of good defenses this year, including Georgia, when the Tide put up 41 points in that game. Putting up another 40-burger this week is not out of the question. So, the Over seems the more likely of the total bets here.

If you can’t stop yourself from betting Bama, and I wouldn’t blame you, then the place to look at the Crimson Tide is in the first half. The Tide have an average margin of +14.5 points when heading into the break this season and while this number is a little higher than that, this game fits the typical Alabama script.

Come out guns blazing, get a decent lead, then take their foot off the gas as they use the second half to work on things, allowing Kentucky to make a late score or two and costing us the cover.

Did you know that if you parlayed today’s NCAA Kentucky vs. Alabama picks, you could win $XX.XX on a $10 bet? 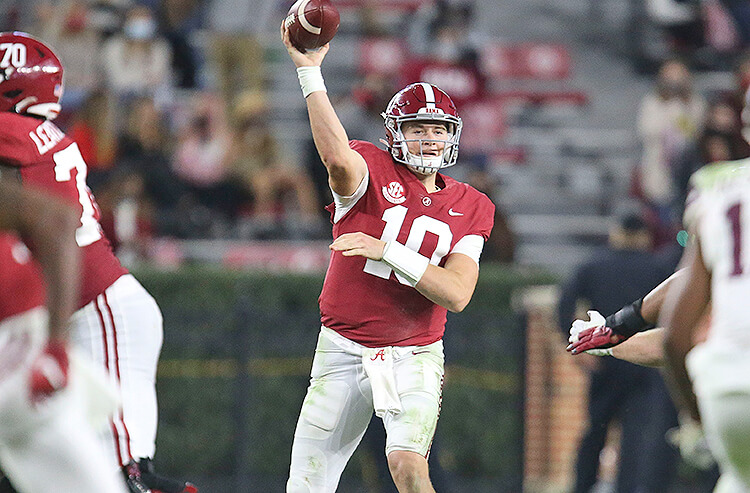 Kentucky vs Alabama picks and predictions for November 21
Provided by