Florida vs Vanderbilt picks and predictions for November 21

The Florida Gators might not be the best team in the country, but college football betting sure has been a lot more fun with the boys from Gainesville suddenly catching fire. Fresh off their dominance of Georgia in the World’s Largest Cocktail Party, the Gators were in the perfect letdown spot against Arkansas last Saturday, only to destroy the Hogs 63-35.

There’s still a chance for the Gators to squeeze their way into the college football playoff, so style points count, and Florida is laying a huge number on Saturday in Nashville.

Here are our best college football free picks and predictions for No. 5 Florida at Vanderbilt. Kickoff will get underway at 12:00 ET at Vanderbilt Stadium.

Nashville’s going to be mighty nice on Saturday. You can expect a high of 71 degrees with wind out of the south at 6 mph and a paltry 10 percent chance of rain. Be sure to monitor the gametime conditions with our NCAA football weather info.

Gators are 5-1 ATS in their last 6 meetings in Vanderbilt. Find more NCAA betting trends for Florida vs. Vanderbilt.

The Gators are putting up points like they did back in the Steve Spurrier days, and even the “Ol’ Ballcoach” has to be impressed with the season that Kyle Trask is having. Last week against Arkansas, the Florida quarterback connected on 23-29 passes for 356 yards and six touchdowns. Oh, and he just happened to be without his top receiver, tight end Kyle Pitts. The Gators still have some concerns on defense, however, as they allowed Arkansas to rack up 458 yards of total offense.

Vanderbilt is terrible. They’re winless this season. Quarterback Ken Seals is a true freshman who has thrown eight touchdowns and eight interceptions. And the Commodores have lost each of their three home games this season by at least 33 points.

I’m not a fan of laying such huge numbers, but don’t know how in the world you could grab Vandy and the points here. The Commodores are 2-9 in their last 11 games, they have nothing to play for, and Florida is in “well-oiled machine” mode.

While Arkansas is a much better team than Vanderbilt, I expect this game to look much like the one we saw last week. Vanderbilt will score some points because the Gators defense can be suspect at times, but ultimately, Florida’s firepower will overwhelm the ‘Dores and push the number past the Total. The Over is 7-1 in Florida’s last eight games.

Trask’s numbers at this point in the season are hard to fathom. He’s thrown 28 touchdowns and only 3 interceptions, and Vanderbilt is 88th in the country in total defense. Did I mention the Commodores are an awful football team? Expect another big game from the Gators quarterback as he makes a serious run at the Heisman Trophy.

Did you know that if you parlayed today’s NCAA Florida vs. Vanderbilt picks, you could win $56.82 on a $10 bet? 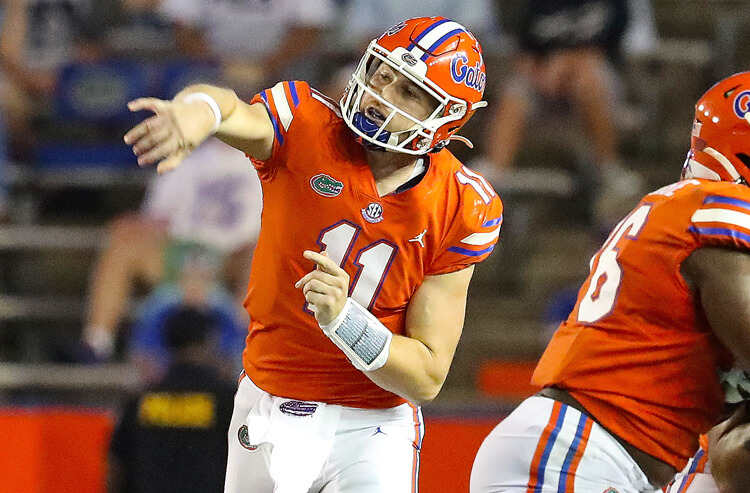 Florida vs Vanderbilt picks and predictions for November 21
Provided by

Oregon vs UCLA Picks and Predictions: Back the Bruins at Home
JD Yonke | Oct 23, 2021

Utah vs Oregon State Picks and Predictions: Beavers Take a Bite Out of Utes' Season?
Zachary Cohen | Oct 22, 2021
About Us
Contact Us
Careers
Our Team
Brand
Testimonials