Warriors vs Timberwolves Picks: The Pack is Back

After going 59 games without winning consecutive games, the Minnesota Timberwolves are riding a three-game win streak into their matchup with the Golden State Warriors on Thursday night. While Golden State is fighting for positioning in the play-in tournament, Minnesota is just looking to string together a few positive weeks to close out the season.

Can the Dubs fend off a scrappy Wolves team? Here are our best NBA betting free picks and predictions for Warriors vs. Timberwolves on April 29 at 8:00 p.m. ET.

The Timberwolves are 4-0-1 ATS in their last five games. Find more NBA betting trends for Warriors vs. Timberwolves.

The Timberwolves and head coach Chris Finch have made it clear they have no intentions of tanking down the stretch and understandably so, despite the stakes surrounding their draft position this year. Injuries and COVID have ravaged the Wolves' chances of evaluating their core in 2021, with Karl-Anthony Towns, D'Angelo Russell, Anthony Edwards and Malik Beasley sharing the floor for just 13 minutes all season.

Since Russell returned from knee surgery, even with Beasley out, the returns have been positive. Minnesota is 9-6 this season when both Towns and Russell play, a record that includes three wins over the Utah Jazz. Towns, who has proven to be an elite offense unto himself, is fostering a fantastic two-man game with Russell, while Edwards' efficiency continues to grow. On the defensive end, Finch has installed a chaos-centric system that sees the team help at every opportunity before scrambling to recover.

If nothing else, since the All-Star break, the Wolves have begun to resemble a competent NBA team and the results are coming, with a 6-4 SU record in their last 10 while going 6-3-1 ATS.

Though Golden State is yet to pick up ground for positioning in the play-in tournament, sitting 10th, Steph Curry refuses to let the team die. The former unanimous MVP has gone completely nuclear this month, averaging 37.3 points on 52.7 percent shooting from the field while adding 6.1 rebounds and 4.4 assists per game.

With Curry's fantastic form and Minnesota's penchant for not closing out on shooters, Golden State could run away with this one. However, we're buying the renewed effort Minnesota has shown on defense in recent weeks. The Wolves may not stretch their winning streak to four games, but they should be able to cover at home.

Though Minnesota has upped the defensive intensity to close out wins over the Jazz (back-to-back) and the Rockets, it still enters every game with the intention to simply outscore its opponents, and it's very much an offense-focused team despite starting a trio of good-to-great defenders in Towns, Jaden McDaniels and Josh Okogie.

Despite Curry doing everything he can to carry the Warriors, their defense has continued to play well enough for the team to be a solid Under bet, at 1-4 O/U over their last five. They do, however, allow big nights to opponents and get dragged into shootouts with some regularity.

For as great as Golden State's defense has been all season, if it's going to leave the Twin Cities with a win, it is going to need to outgun an offense that's clicking. With Curry always capable of answering the call, we like this one to go Over.

When the Wolves hired Finch mid-season, it was very obvious which direction Minnesota's offense would go, with Finch widely credited for installing the Nuggets' offense centered around MVP candidate Nikola Jokic while he was in Denver and the Pelicans' offense with DeMarcus Cousins and Anthony Davis.

Towns has been empowered as a playmaker and gets more touches both at the elbow and above the arc, with the All-NBA big man showing off great vision and a wonderful range of passing in addition to his incredible scoring ability. Golden State may have a superb team defense, but it doesn't have anyone who can contain one of the best centers in the NBA.

Did you know that if you parlayed today’s NBA Warriors vs. Timberwolves picks, you could win $58.70 on a $10 bet? 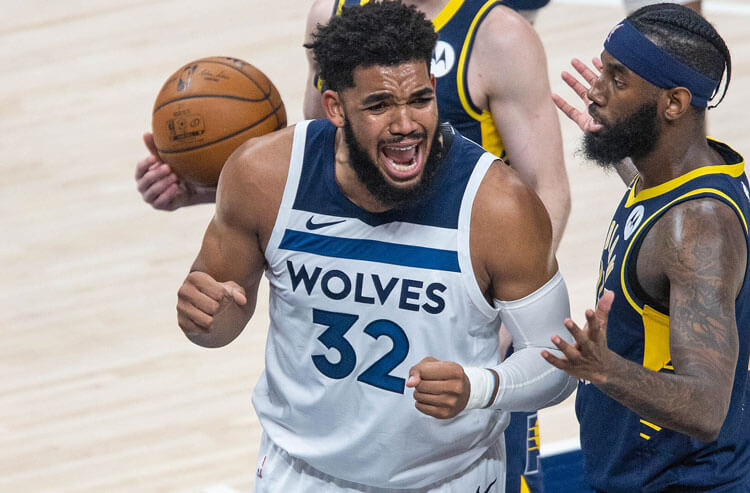 Warriors vs Timberwolves Picks: The Pack is Back
Provided by

Raptors vs Celtics Picks and Predictions: Raps' Offense Could Be in for Long Season
Rohit Ponnaiya | Oct 22, 2021

Clippers vs Warriors Picks and Predictions: Warriors Look For L.A. Sweep
Zachary Cohen | Oct 21, 2021
About Us
Contact Us
Careers
Our Team
Brand
Testimonials