Mavericks vs Pistons Picks: Who Has More Horses?

Josh Jackson has been making the most of garbage time, and will have a green light tonight with several Pistons starters sidelined.

Welcome to late-season basketball, where the injury reports are laundry lists, and nothing is as it seems.

A non-conference clash between the Dallas Mavericks and Detroit Pistons poses some tough NBA betting questions on Thursday night, with standouts from both squads either sitting out or listed as questionable.

However, the Mavericks do have much more to play for as they jockey for a Top-6 spot in the West and avoid getting sucked into the play-in tournament. Books are giving them the nod, setting Dallas as a big road favorite.

Here are our free picks and predictions for Mavericks vs. Pistons on April 29.

The Pistons are 1-6 ATS in their last seven games following a win.  Find more NBA betting trends for Mavericks vs. Pistons.

This game could be less about handicapping the matchups and mismatches and more about knowing who’s in and out. As it stands Thursday morning, the Mavericks have stars Luka Doncic and Kristaps Porzingis among a slew of other top contributors listed as questionable.

Doncic has been playing through an elbow ailment in recent games but that injury hasn’t held him back. He’s averaging more than 28 points per game this month and is coming off a 39-point performance in the win over Golden State on Tuesday, shooting 15 for 23 in that victory.

Porzingis has a legit shot at returning to the court Thursday after sitting out the last three games due to an injured ankle. He hasn’t suited up since April 22 but was having a great April before getting hurt, posting 20.6 points and 10.4 rebounds per game this month.

As for the Pistons, this team is packing it in. Detroit is resting Jerami Grant, Wayne Ellington, Cory Joseph, and Mason Plumlee Thursday night, putting a collective 50.4 points per game in street clothes – 47 percent of the team’s offensive output.

Detroit prides itself on depth, with an NBA-high 41.8 points off the bench per game, but with four of five starters putting their feet up, it’s tough to get behind the Pistons, even with all those points on the table. Detroit is coming off a win, knocking off the shorthanded Atlanta Hawks 100-86 on Monday, but is 1-6 ATS in its last seven games coming off a victory – which has been rare in Motown this season.

These teams met earlier this month, with the Mavericks taking a 127-117 win at home, but just coming up short as 10.5-point favorites on April 21. Since then, Dallas is 3-1 SU and ATS and sits half a game ahead of Portland in the No. 6 spot in the West and 1.5 games back of the L.A. Lakers in fifth.

If you’re on the Mavericks, you’ll want to grab them now and hope for the best when it comes to those impactful injuries. But given the state of both rosters, no one would blame you for looking elsewhere for action Thursday night.

The total for this matchup tells you how bookies are treating Dallas at Detroit, setting the Over/Under at 214 points. We mentioned the slew of Pistons scorers getting a rest spot and with the status of many Mavericks up in the air, this total is padded against the stars not playing.

Detroit’s heavy lifting will fall on Saddiq Bey and Josh Jackson, who rotate in and out of the starting lineup. That pair has combined for 25 points per contest on the year but has played above those averages in April. Jackson is scoring 17 points a night this month while Bey has upped his production to 13.4 average points in April.

As mentioned, Detroit does boast the best bench in the business, with reserves getting an average of 20 minutes of run per game. Backup point guard Frank Jackson has thrived in an expanded role this month, posting 18 points versus Atlanta and averaging nearly 12 points through April.

Dallas’ scoring punch isn’t solely dependent on the starters either, with the bench chipping in with 37.1 points per game. The Mavericks also have capable scorers in Trey Burke, J.J. Redick and Jalen Brunson, who scored 12 points versus Golden State on Monday and tallied 20 points against Detroit on April 21.

If Dallas can put a few of those banged-up bodies on the court, along with the Pistons’ punch off the pine, this final score will inch Over the total Thursday night.

Josh Jackson will have nothing but flashing greens versus Dallas tonight. The 6-foot-8 swingman is the anchor of the Pistons attack, with many regulars on the sidelines.

Jackson is having a great April and will have fresh legs for Thursday after sitting out Detroit’s win over Atlanta due to an illness. He’s had a pair of 29-point performances this month and while he recorded only 12 points versus Dallas earlier in April, he had to share the ball with Detroit’s other standouts. 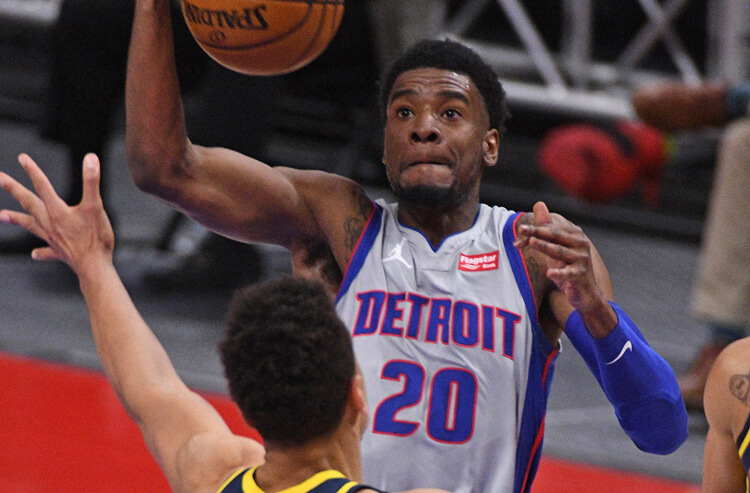 Mavericks vs Pistons Picks: Who Has More Horses?
Provided by