Bucks vs Rockets Picks: Milwaukee Coming to Feast in Houston

The Houston Rockets have been double-digit underdogs a dozen times this season and once again get points in bulk hosting the Milwaukee Bucks on Thursday.

Tonight’s beefy spread will mark the third time in the past nine days the Rockets have been installed as double-digit NBA betting dogs, with Houston counting down the minutes until a slog of a season wraps and showing more fight in the strip club than on the court. Milwaukee, on the other hand, is keeping pace in the race atop the Eastern Conference.

Check out our free NBA picks and predictions for Bucks vs. Rockets on April 29.

This line toggled several times between Milwaukee -12.5 and -13 at TwinSpires, then moved out to -13.5, where the number rests at 5:45 p.m. ET. The Bucks are attracting 70 percent of point-spread bets and 73 percent of spread dollars. The total rose from 232.5 to 234, though the splits are relatively modest in favor of the Over, at 60 percent of bets/57 percent of money.

The Rockets are 7-20 ATS in their last 27 games as home underdogs. Find more NBA betting trends for Bucks vs. Rockets.

On the season, Houston is 6-6 ATS when pegged as an underdog of 10 or more points but this team is in full-on tank mode heading down the stretch.

The Rockets have lost five straight, 10 of their last 11 outings, and have been blown out of the water in their previous four games as double-digit dogs — losing by an average score of 123.25-108.5 in those contests.

Houston’s marching out a skeleton crew as a result of injuries to veterans like John Wall and Eric Gordon and could be even thinner with guards Danuel House Jr. and Avery Bradley listed as questionable for tonight. The Rockets went just four deep down the pine in Tuesday’s loss to Minnesota with House and Bradley healthy.

Milwaukee isn’t the team you want to be short on bodies against, with the Bucks pushing a pace rating of 103.05 in April and topping the hustle metrics when it comes to loose balls recovered (7.1) and contested shots (62.3).

Giannis Antetokounmpo did pop up on the injury wires but is probable to play. The Greek Freak is scoring more than 29 points a night and rounding up an average of 11.5 rebounds this month. The Rockets are giving up a league-worst 88.6 points per game to opposing forwards in April.

Houston is allowing more than 119 points per game this month but can’t counter those defensive lapses with most of its heavy hitters on offense out of action.

The Rockets have posted 108.7 points for in the last 15 outings, with that production dipping to less than 103 points per night in their last seven contests, leaving them to go 2-5 Over/Under in that stretch. On the year, Houston is 9-21-1 O/U inside the Toyota Center (70 percent Unders).

The Bucks come in ranked No. 1 in scoring in the NBA but have leaned on their defense to get the job done in recent road trips. Milwaukee has allowed just 110.1 points to host teams in April, limiting those foes to 43.3 percent shooting from the field. The Under has hit in four of the Bucks’ last five games as road chalk.

Milwaukee veteran center Brook Lopez does some of his best work in enemy territory. The 7-footer is coming off a 22-point effort at Charlotte and averages 12.5 points per road game on the year.

Lopez has picked up his production this month, scoring more than 14 points per night in April and, with Houston tossing bigs at Giannis, there will be ample space for Lopez to operate around the key.

On top of that, the Rockets are one of the worst rebounding teams in the league (47.7% rebound rate) and offer up more than 10 offensive boards per game to opponents. That means some easy putbacks and second-chance looks for the Bucks’ big man in the middle. 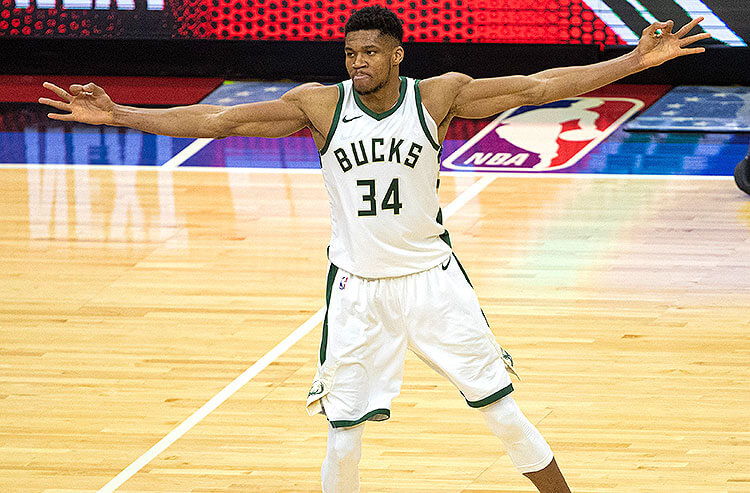 Bucks vs Rockets Picks: Milwaukee Coming to Feast in Houston
Provided by