Nets vs Pacers Picks: The Question Isn't How—It's By How Much for BK?

Editor's note: this preview was written prior to the news that Brooklyn PG Kyrie Irving would not play due to rest.

The Brooklyn Nets became the first team in the East to clinch a playoff berth, but they can't afford to rest on their laurels as they hold a slim one-game lead for the top spot in the conference.

The Nets will look to continue their push for home-court advantage on Thursday when they visit a decimated Pacers squad that is clinging on to a position within the play-in tournament structure.

Indiana may be more desperate for a win, but oddsmakers still opened with the Pacers as nearly double-digit NBA betting underdogs against a Nets team that's looking extra scary with Kevin Durant healthy again.

Here are our best free NBA picks and predictions for Nets vs. Pacers on Thursday, April 29, with tip-off scheduled for 7:00 p.m. ET.

Pacers are 1-8 ATS in their last 9 games as a home underdog. Find more NBA betting trends for Nets vs. Pacers.

The East-leading Nets have won three in a row and four of their last five and, more importantly, seem to have a healthy Kevin Durant again, who is as terrifying as ever. The scoring cheat code came off the bench and dropped 33 points in just over 28 minutes against Phoenix (the NBA's 6th-ranked scoring defense) on Sunday and then scored an efficient 17 points on 71 percent shooting in an easy win over the Raptors Wednesday.

Now on tap is a Pacers squad that has been absolutely crushed by injuries, especially in the frontcourt where their first, second, and possibly third center on the depth chart could all sit out tonight.

Yes, Indiana has won three of its last four games, but those three wins came against Oklahoma City, Detroit and Orlando—three of the five worst teams in the Association. The Pacers' win streak halted as soon as it faced a quasi-competent team in Portland, suffering an ugly 21-point loss that required a +14 margin in the fourth quarter (during supreme garbage time) to make the score less embarrassing.

Indiana has given up the third-most points in the NBA this month (120.3) and hosts a Nets team that is fourth in scoring in April (and No. 2 on the season). With Durant looking as unstoppable as ever, this one could get out of hand.

The only concern if you're a Nets backer is that this is the first half of a back-to-back, with Portland on tap tomorrow followed by a six-game road trip (that begins with two key games against Milwaukee), so head coach Steve Nash may be quick to yank the starters and give them an extended rest—welcoming the Pacers to have a nice, cozy backdoor cover.

But, considering Indiana was down by 35 going into the fourth quarter against Portland, KD & Co. may put tonight's game out of reach for any type of late-game shenanigans...especially with the spread still at single digits.

Early line movement dropped this from -9.5 to -8.5, but this line could puff up a lot closer to game time. Jump on it now and get the lowest number to protect yourself from any possible punishment from the scrubs.

We mentioned above that the Pacers are giving up the third-most points in April, while Brooklyn is No. 4 in scoring during this month. Well, in addition to that, Indiana is also putting points on the board, sitting just ahead of Brooklyn in April scoring.

Indiana can't stop anybody off initial shots, and to compound things, it's giving up an NBA-worst 14.3 offensive rebounds per game this month, meaning that the Nets will get plenty of second and third attempts. That is a terrible recipe when facing one of the best offensive players in the league—plus a sharpshooter like Joe Harris and a seemingly revitalized Blake Griffin.

With the schedule getting tougher — and more important — for Brooklyn, don't count on the starters giving it their "A" game on defense. But you can count on the backups doing what they do best when the benches inevitably get emptied: play nothing resembling defense and just focus on getting buckets.

The Pacers were already 29th in the NBA in rebounding percentage (and dead last in defensive board percentage), but the massive holes in the frontcourt have been crippling.

Indiana was outrebounded 57-38 in the loss to Portland and over the last four games, has seen its opponent hold a combined 53-board advantage.

So who could be a low-key benefactor of all these rebounds tonight? Brooklyn forward Jeff Green.

The cagey veteran grabbed five boards against Phoenix and corraled eight rebounds against Toronto. With other board-grabbers like Durant, Griffin and DeAndre Jordan likely to get some extra rest tonight, somebody will have to play the frontcourt minutes—and that should be Green.

His rebounding total tonight is set at 5.5, which is too good for us to pass up against the saddest rebounding team in the NBA—especially at plus money. 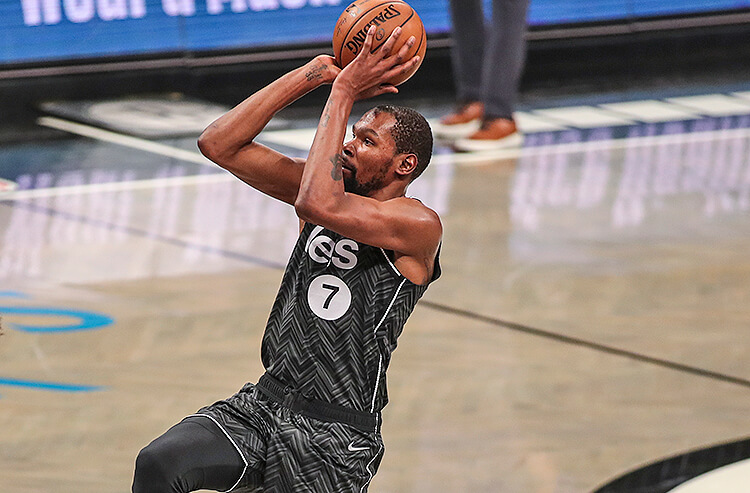 Nets vs Pacers Picks: The Question Isn't How—It's By How Much for BK?
Provided by