Suns vs Clippers Picks: Too Hot to Handle?

Virtuoso point guard Chris Paul has lifted the Suns out of NBA obscurity into the West's penthouse. Phoenix comes into tonight off an OT win over the league-leading Jazz, but are still an underdog to the Clippers.

The Phoenix Suns have been shining brighter than anyone could've given them credit for this season. A testament to Chris Paul's presence, the Suns, at least for now, look like legitimate title contenders.

Who's the smart NBA betting pick for tonight's nightcap showdown of elite West teams? Find out with our Suns vs. Clippers picks and predictions for Thursday, April 8.

Suns are 6-0 ATS in their last six games as a road underdog. Find more NBA betting trends for Suns vs. Clippers.

We're a little confused here. Yes, Phoenix played an OT game last night, but it gutted out a win and cover against the NBA's best team record-wise, beating Utah 117-113 as a 2.5-point dog. The win extended both the Suns' cushion over the Clippers for second in the West (currently three games) and their margin as the NBA's top ATS team (33-17).

The Clips recently reeled off a stretch where they looked like the NBA's very best squad, winning six straight against relatively tough competition—all by double digits. But since then, they've split four games, including a humbling collapse to the depleted Magic. All season, the Clippers have struggled with consistency, so looking at their recent record and presuming that's who will show up tonight is foolhardy.

Phoenix is a tough two-way team that doesn't seem to get enough respect from the books, who clearly are marking it for a let-down spot tonight. But the Suns have been remarkably consistent and well-coached. They can also throw borderline-elite defender Mikal Bridges on whichever of Kawhi Leonard or Paul George is giving them more issues.

A spread this big is slighting the Suns. When the best ATS team in the league is being spotted this many points, I don't care how well the Clippers have been ostensibly playing.

The Clippers continue to be an extremely frustrating team for total betting. While they're the NBA's sixth-best Over team on the season (29-22-1), their team totals are an awkward scatter plot with little rhyme or reason: equally likely to flirt with 120+ or struggle to drop 100.

Meanwhile, the Suns are a deliberate, methodical squad, as any piloted by Chris Paul tends to be. They're also the NBA's fifth-rated defense and allow the fifth-fewest points by opponents. The Clippers happen to rank right behind them in sixth, with the squads combining to allow 215.9 ppg.

Also of note tonight will be pace: The Suns and Clippers rank 25th and 29th, respectively, in possessions per game, suggesting this matchup will be a serious grind and further lending credence to the Under.

The Suns will likely be a little gassed after last night's OT win, and more apt to slow this game down and grind out defensive edges. Place your bets accordingly.

Devin Booker is cooking right now. The Suns' All-Star shooting guard is averaging 34 ppg over his past six games, and his 26.5 points total for tonight leaves plenty of room for regression against a slow-paced team where Leonard or George is likely to match up with Booker on D for a good chunk of this game.

Given Booker's current form, hitting the Over seems reasonable, and we're also tempted to fire on his Over 1.5 3-pointers. While the juice is heavy on this prop (-159), it feels like a fairly sure thing, given that Book has averaged almost twice that many (2.71) over his past seven games, despite an outlier 0-fer against Utah last night. 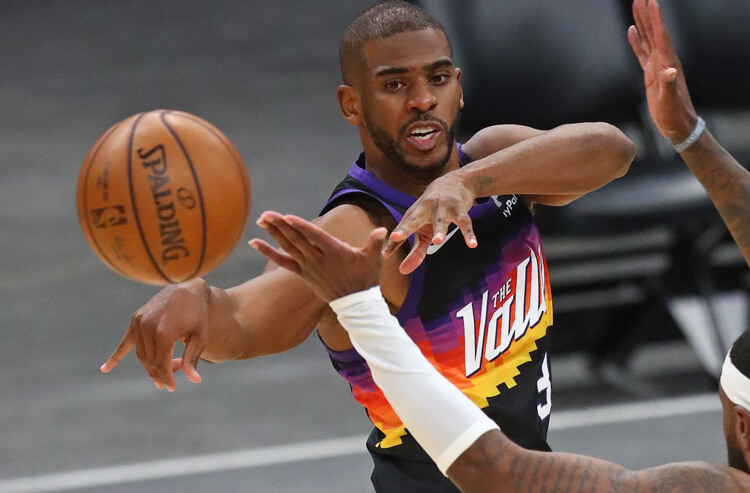 Suns vs Clippers Picks: Too Hot to Handle?
Provided by