CJ McCollum will likely be guarded by Donovan Mitchell tonight, on the second half of a back-to-back for Utah, giving the Portland guard a good chance to pile up some points tonight.

The Utah Jazz host the Portland Trail Blazers tonight with a 10:00 p.m. ET tip-off, but Utah probably wishes it started a little later. The team had a tough overtime road loss against Phoenix last night and now has to turn around, fly home and play a tough Portland team right away.

Who will come away with the victory in this exciting NBA betting matchup between two Western Conference powers?

Find out in our free NBA picks and predictions for Blazers vs. Jazz at Vivint Arena in Salt Lake City on Thursday, April 8.

The Blazers are 5-2 ATS in their last seven games as road underdogs. Find more NBA betting trends for Trail Blazers vs. Jazz.

The Jazz are coming off of a tough overtime loss against the Suns, and they now have to quickly turn around and head back to Utah for a home game with the Blazers. Utah is a very good home team, but it’s hard to get up for a game after investing so much in one the night before. So, while Utah can easily end up winning this one, Portland really should have a good shot at keeping this one very close.

On top of the Jazz being a little fragile emotionally here, the Blazers also happen to be a tough matchup for them. Utah normally a backcourt advantage over its opponent, but Damian Lillard and CJ McCollum definitely make up the better guards duo in this game.

The two of them should be able to get hot, even if the Jazz are able to turn it on defensively. Also, Portland has a defensive game wrecker on the wing, as Robert Covington is an extremely disruptive team defender. His ability to get hands on passes and make his opponents uncomfortable will do a lot to deter Utah’s off-ball shooters.

Jusuf Nurkic’s status is something to keep an eye on in this game. If he is able to play, the Blazers might not just cover—but come away with an outright win.

The Jazz normally lock-in and defend at a high level, but they could be a little out of it after last night’s loss to the Suns. The Blazers should look to push the tempo a bit, as that’s how they can really make the Jazz uncomfortable.

Meanwhile, Portland is 29th in the NBA in defensive rating. That means that even on an off night, the Jazz would be able to put up a decent number in this game. Overall, this seems like it has a good chance of turning into a shootout.

Donovan Mitchell is probably the weakest defender in Utah’s starting lineup, and that’s exactly who will be guarding McCollum tonight.

McCollum is one of the most creative scorers in the entire NBA, and he’s going to look to attack Mitchell in this one. Don’t be surprised if the 29-year-old ends up scoring Over his number – and even tops 30 points in this one – as this should be his type of game. 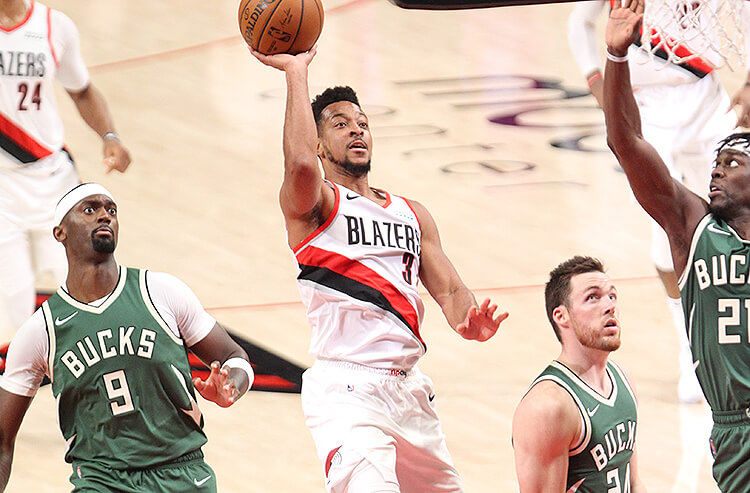