Lakers vs Hornets Picks: Both Clubs Stung Hard by the Injury Bug

Miles Bridges has stepped up for a Hornets team that's dealing with key injuries, as he has averaged almost 19 points per contest over his last four games.

The Los Angeles Lakers close the book on a weird and wild seven-game road trip when they visit the Charlotte Hornets on Tuesday.

The Lakers, who are playing without LeBron James and Anthony Davis, have had mighty highs and lows during this road swing—the lowest coming in a 111-96 loss as 1-point NBA betting underdogs to the New York Knicks Monday. Los Angeles has a quick turnaround before facing a hungry Hornets squad boasting a 13-9-1 ATS mark at home.

Don’t miss our free NBA picks and predictions for Lakers vs. Hornets on April 13.

The Hornets are 6-1 ATS in their last seven games as favorites. Find more NBA betting trends for Lakers vs. Hornets.

Mistake-laden basketball burned Lakers bettors Monday with L.A. coughing the ball up 24 times and allowing the Knicks to translate those errors into 29 easy points. On the season, the Lakers are worst in turnovers, handing the ball over almost 16 times per contest and now face a Hornets team that thrives on converting chaos into buckets.

The Hornets force an average of more than 15 turnovers per outing and cash in that careless play for 18.6 points per game—third-highest points off turnovers in the NBA. That “offense from defense” fuels one of the best transition attacks in the league, with Charlotte posting an effective field goal rate of 63.8 percent in transition and picking up 24.4 points per game in those situations (second-most in the NBA).

A quick rundown of the advanced stats sees L.A. as one of the top transition defenses in the land, with opponents firing a scoring frequency of only 45.4 percent. However, those stats were built with LeBron’s versatility on defense and Davis getting back to protect the rim.

Not only does Los Angeles miss those two dearly on the defensive end but those two-way talents are the lifeblood of this Lakers attack. Outside of a freak 3-point shooting effort versus Brooklyn which produced 126 points, the Purple and Gold have scored 110 points or less in eight of their last 10 contests.

Los Angeles is lacking the horses to make up for those turnover mistakes and will only be slower to the draw on the second night of back-to-back outings, looking ahead to a return to L.A. after being on the road since the beginning of the month.

Charlotte’s exclamation point in transition is the 3-ball, which it hits at a near 38-percent clip on the season. The Hornets pick up 42 percent of their total points from triples and have been especially active from deep in recent games, knocking down 49 of their 137 triple attempts over the past three games.

The Hornets are missing key contributors as well with LaMelo Ball, Gordon Hayward and Malik Monk all out of action. But with scoring coming off of turnovers and transition threes, Charlotte has still pumped out the points in recent games, scoring 127 and 113 points versus Milwaukee and Oklahoma City—playing Over in both games.

The Lakers’ poor offensive output on Monday was due in part to the Knicks’ stingy top-ranked defense but also their no-pulse pace with the basketball. Los Angeles has played Over some low totals during this trip—topping numbers of 206, 206.5 and 208—and with heavy legs on zero rest facing a recharged Hornets team, we see this final score squeaking Over the short total Tuesday.

Miles Bridges has made the most of his extra minutes with injuries plaguing the Hornets’ top scorers. The versatile forward is starting for Charlotte, switching between small forward and power forward, and averaging almost 19 points over the past four games.

Bridges has been especially valuable from deep, making an average of 2.8 3-point buckets per game this month including going 7 for 18 from distance the past two games. The 6-foot-6 Michigan State product will find plenty of opportunities to beat tired L.A. defenders downcourt in transition and hit big shots from beyond the arc Tuesday. 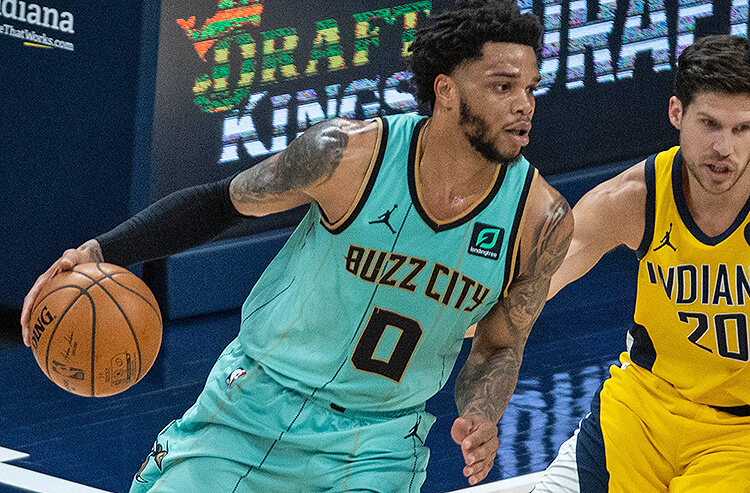 Lakers vs Hornets Picks: Both Clubs Stung Hard by the Injury Bug
Provided by