The injury-plagued Raptors are 1-3 SU and ATS in their last four games, but they're facing an equally banged-up Atlanta squad Tuesday night.

Editor's note: this preview was written prior to news that Toronto's Kyle Lowry (rest) would not play tonight

The Atlanta Hawks have pulled ahead in the Southeast Division, thanks to a soft stretch of schedule, and put those winning ways to the test with a trip to Tampa to play the displaced Toronto Raptors on Tuesday.

The Hawks have won six of their last seven contests, going 6-1 versus the NBA betting spreads in that span, but those opponents boasted winning percentages of .519 or less. The Raptors fall into that cursed category, stumbling below .400 with one win in their past four games (1-3 ATS).

Here are our free NBA picks and predictions for Hawks vs. Raptors on April 13.

The Under is 17-8 in Raptors’ last 25 games as home favorites (Toronto and Tampa). Find more NBA betting trends for Hawks vs. Raptors.

The Hawks have been on fire since canning head coach Lloyd Pierce at the start of March, running out to a 15-5 SU record and 13-6-1 ATS count in their last 20 games heading into Tuesday. On closer inspection, however, Atlanta’s surge has been fueled by high-calorie cupcakes.

The Hawks have played well enough to push past mediocre clubs but got rolled against tougher competition. Three of those losses came against Phoenix, Denver, and the L.A. Clippers while the bulk of the victories were scored against foes either in the bottom half of the NBA standings or missing key players.

That includes a 121-120 win over Toronto on March 11. The Raptors, who covered as 3-point home underdogs in their adopted home of Amalie Arena, were without standouts Fred VanVleet, OG Anunoby, and Pascal Siakam for that matchup. The Raptors have battled through injury issues in recent weeks but are hoping to get healthy in time for Tuesday’s tilt.

While VanVleet is still sidelined, and Captain Kyle Lowry is sitting tonight (rest) after returning to action yesterday for the first time this month, head coach Nick Nurse has recently rested Siakam and Anunoby. Those fresh legs coincide with a brief break and a return to Tampa, where the Raps are allowing only 108.9 points per outing—compared to 114 against per road game.

The Hawks have been handed their share of injury woes as well and limp into Tuesday with some key players listed as question marks. Atlanta is still without second-leading scorer John Collins (foot) and could also be missing forward Danilo Gallinari (13.4 ppg), De'Andre Hunter, and backup shooting guard Tony Snell, who are both ruled out Tuesday. All four missed Sunday’s 105-101 win at Charlotte.

We’re betting to a prideful Raptors side, rested and ready to stop the bleeding on Tuesday.

As mentioned above, the Raptors play a tougher brand of defensive in their makeshift COVID home. Toronto limits visitors to just over 45 percent shooting from the floor, including a 36.3 percent success rate from distance.

Toronto has active and versatile defenders in Siakam and Anunoby, who can easily switch and defend screen-and-roll attacks. In fact, the Raptors are one of the best defenses against pick-and-roll sets—more specifically slowing down the ball hander—which is the base of Atlanta’s offense, powered by Young’s ability to create shots and distribute the ball.

Offensively, Toronto just can’t find its range this season, unable to finish off transition possessions with those quick-hitting triples. The Raptors have even trimmed down the number of looks from beyond the arc in recent games, averaging only 33.3 shots from distance in the past three outings compared to almost 41 chucks from downtown on the season before that stretch.

Mix in those impact injuries on the Hawks roster—four of their top five scorers either out or questionable—and you have to lean Under on Tuesday. 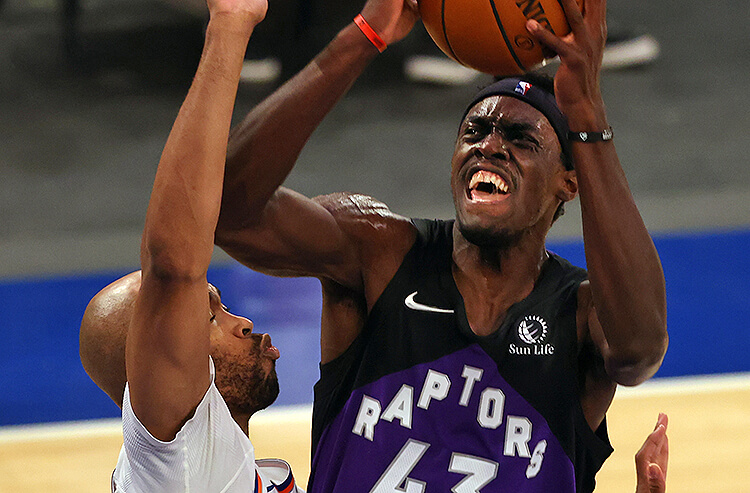