Domantas Sabonis is one of the NBA's most skilled big men, and shouldn't have trouble picking apart a Clippers frontline that will be without Kawhi Leonard and Serge Ibaka.

The Indiana Pacers have won three straight games, a solid momentum boost for a team that has looked very lost at times this season.

They'll try and keep things going tonight at home as they host the Los Angeles Clippers in NBA betting action—and we don't hate their chances.

Check out Covers' breakdown of this cross-conference matchup with our Clippers vs. Pacers picks and predictions for Tuesday, April 13.

Los Angeles opened -1.5 overnight at PointsBet USA and by midafternoon stretched to -3, where the line rests at 4:30 p.m. ET. The Clippers are attracting 78 percent of point-spread bets and 70 percent of point-spread cash. The total initially dipped from 230.5 to 229, then rebounded to 232, with 66 percent of bets on the Under, but money running almost dead even.

Over is 7-3 in Pacers' last ten games as an underdog. Find more NBA betting trends for Clippers vs. Pacers.

The Pacers haven't quite been able to get right this season. While a rotating cast of injuries has helped quell any momentum they've tried to sustain, they've also generally performed less than the sum of their remaining parts.

Tonight, it will be likely All-Defense center Myles Turner on the sidelines as Indiana aims to get back on track to an actual playoff spot instead of the play-in round. And it will be facing a somewhat vulnerable opponent in the Clippers, who will be without as many as three starters—most notably superstar Kawhi Leonard.

Leonard has missed ten games so far this season, and while L.A. is 6-4 SU in those contests, the bulk of those wins have come against foes either beneath or straddling the playoff threshold. A further two wins came two months ago against Miami, who hardly resembled a playoff team at that point.

Indiana should be graded as capable of punching above its perceived weight. The squad has underachieved for most of this season despite a well-rounded roster, and spotting points—even sans Turner—against a Clippers squad without its best player feels questionable.

While the Pacers have an eyesore of a home record (9-15 SU, tied with Detroit for the East's worst mark), they also have numerous weapons and the impetus to perform. Turner's absence will hurt, but not as much as the Clippers' losses in this game, which they will view with less urgency now that Denver—the team charging up the standings to challenge them—has lost Jamal Murray for the foreseeable future.

Indiana has been a walking Over recipe the past couple of months. From February 13 to March 24, it reeled off a stretch of 13-4 O/U, and even though the books have adjusted, the Pacers haven't taken their foot off the gas.

Indiana's last five games have averaged an outlandish 249 points, including what has to be viewed in any context as a 113-97 outlier loss against Chicago. The Pacers have fully embraced their identity as a fast-paced team, and having Turner in casuals tonight won't help keep points off the board.

Skeptics may point to the Kawhi-less Clippers as a liability against tonight's high total (229), but they've averaged 115 ppg in their last six games without Leonard, and against teams that don't yield buckets at the same rate as Indiana.

Give credence to Paul George's ability to prop this team up on offense tonight. After a lingering toe injury began to show some apparent ill-effects prior to last week, PG has responded averaging 33.66 ppg over his last three on 56 percent from the field.

The Pacers will drive this one (fifth-fastest, um...pace..in the NBA), and the Clippers are the NBA's best-rated offense that can keep pace in a shootout with or without Kawhi.

As mentioned above, George is an absolute groove right now, and will have the ultimate green light with Leonard out tonight. His 26.5 points total sits 3.5 above his season average, but PG figures to see more looks with Leonard's 26 ppg wiped off the board.

Especially given George's current form and the rate at which the Pacers concede buckets, count on him to surpass this total, which we get without being gouged by the juice. 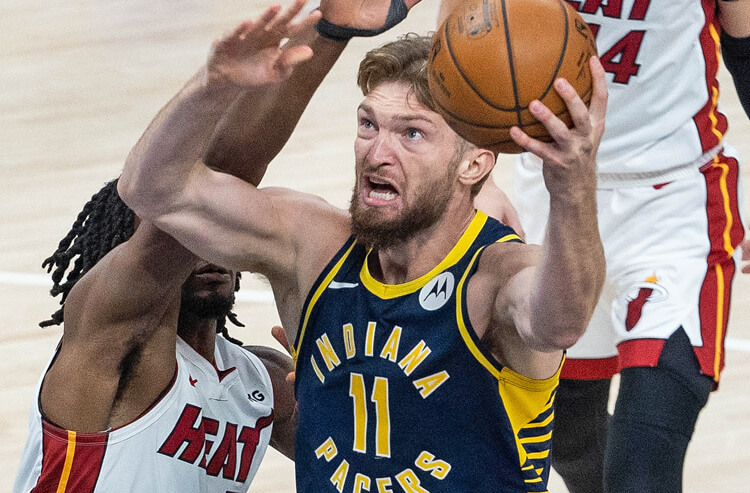